Since the 1960s, before Broomfield even became a county, many local governments have pursued the creation of a beltway connecting cities around Denver. In 2008, just seven years after it officially became a county, Broomfield signed on to be part of the Jefferson Parkway Public Highway Authority that would build the Jefferson Parkway, connecting Highway 128 in Broomfield with Highway 93 in Golden.

But in February 2020, Broomfield City Council voted unanimously to leave the JPPHA because of concerns that the route ran too close to the Rocky Flats National Wildlife Refuge, which encompasses much of the former Rocky Flats Nuclear Weapons Plant. Looking back at the plant's history of producing plutonium triggers for bombs, some members of the public worried that contamination would affect the health of construction workers and the surrounding community.

As a result, soil tests were conducted in May 2019; they registered plutonium levels generally lower than the Environmental Protection Agency’s c50 pCi/g cleanup standard for Rocky Flats, though still at detectable levels. The highest rating of 264 pCi/g of plutonium, more than five times the 50 pCi/g cleanup standard for Rocky Flats, was recorded along Indiana Street, near the proposed path of the parkway.

Although the Colorado Department of Public Health and Environment said that parkway construction would not pose a risk to workers or neighbors, Broomfield pulled out of the project anyway.

As Broomfield negotiated its departure from the JPPHA, things got testy, with the three cities disputing how much money Broomfield still owed and whether or not Broomfield was still required to give land in Broomfield to the project.

“The three local government entities executed contracts in which they agreed, amongst other things, to share in the operating costs of the project and to convey the land within their respective jurisdictions necessary to complete the path of the roadway,” the lawsuit contends. “The completion of the Jefferson Parkway is not possible without Broomfield’s performance. Broomfield’s actions throw the future of the Jefferson Parkway into disarray and leave Arvada and Jefferson County no way to recoup the millions of dollars in taxpayer contributions that have been expended on the project to date.” 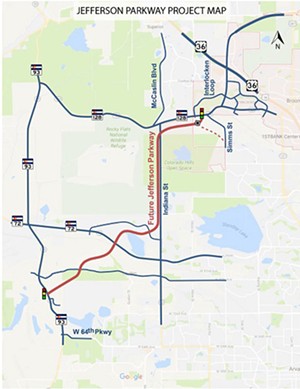 The proposed Jefferson Parkway is at the center of a legal battle.
JPPHA

Those contributions include $6.3 million from Jefferson County, $6.9 million from Arvada and $3.5 million from Broomfield; the plan was to recuperate the funds through tolls once the parkway was established.

Jefferson County and Arvada claim that Broomfield breached a 2008 contract, revised in 2010, that stated the three parties would rely on each other and only undertake actions that respected that reliance. Broomfield was required to obtain unanimous consent in order to withdraw and did not, the suit alleges.

The lawsuit also calls Broomfield’s departure from the project “sudden,” and says that Broomfield did not satisfy its outstanding obligations before withdrawing, including making financial contributions to JPPHA and conveying the land needed to complete the project. According to the lawsuit, Broomfield hasn’t paid its share of operating costs since 2018, nor covered its share of the soil sampling that eventually led to its departure from JPPHA.

The lawsuit asks that Broomfield be required to convey the land and pay damages for its breach of contract.

Broomfield says it has been negotiating with Arvada and Jefferson County in good faith and will continue to do so, but declines to discuss pending litigation.

Broomfield officials had previously said they do not believe they must donate the land to fulfill the contract; meeting notes from a September 2020 city council study session indicated that the group had identified an alternative route on land owned by Jefferson County and Westminster to the south of Great Western Reservoir that would provide a path for the parkway even without Broomfield’s participation. 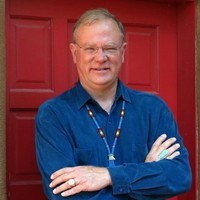 During a June 14 Jefferson County Board of Commissioners’ meeting, the sole public comment came from Jon Lipsky, who led the 1989 FBI raid on Rocky Flats that would eventually result in the plant being shut down; he's still actively educating people about the potential health dangers of the refuge.

“The purpose of my public comment is to encourage and persuade the Board of County Commissioners, Jefferson County, Colorado and the City of Arvada...to be fully transparent in its furtive legal action against Broomfield regarding the Jefferson Parkway,” Lipsky said, adding that Broomfield’s departure was not sudden and stemmed from years of concern over the project.

The lawsuit contends that the right of way for the Jefferson Parkway was set aside by Congress in 2001 when it created the Rocky Flats National Wildlife Refuge, and that Broomfield must therefore convey the land. But according to Lipsky, the 2001 agreement merely provided opportunities for scientific research compatible with the parkway.

The commissioners didn’t respond to Lipsky’s comments, which he concluded by urging them to prioritize public health and environmental protection rather than monetary gain.
KEEP WESTWORD FREE... Since we started Westword, it has been defined as the free, independent voice of Denver, and we'd like to keep it that way. With local media under siege, it's more important than ever for us to rally support behind funding our local journalism. You can help by participating in our "I Support" program, allowing us to keep offering readers access to our incisive coverage of local news, food and culture with no paywalls.
Make a one-time donation today for as little as $1.