The photo of Ryan Millsap included with his online obituary, and the 2018 shooting scene. newcomerdenver.com/CBS4 Denver
The Colorado State Patrol, represented by the Colorado Attorney General's Office, has agreed to settle a lawsuit over a trooper's fatal shooting of nineteen-year-old Ryan Millsap in Jefferson County during a traffic incident almost four years ago, according to an attorney for Millsap's mother, Dianna.

"The settlement is pending approval by a state committee, which is merely a formality," says Sean Simeson of Englewood-based Baumgartner Law. "I believe the settlement shows how much the state was concerned about the case going to trial and them receiving an unfavorable verdict."

Simeson doesn't mince words when describing Millsap's death at the hands of Trooper Gregorio Retana. "Ryan Millsap was no saint, but he did not deserve to die the way he did," he says. "The police murdered him as he was trying to get away. He didn’t pose a danger to anybody at the time he was shot in the head. And he survived for ninety minutes on the side of the road, bleeding from his head, while officers stood around and watched."

Initial coverage of the November 4, 2018, shooting focused heavily on Millsap's prior record. Here's the lead paragraph from an account in The Mountain Mail, which serves Chaffee County: "A 19-year-old man arrested July 6 for driving a stolen car at speeds of up to 103 mph on the residential streets of Salida and vehicular elusion was shot and killed Sunday in Clear Creek Canyon in Jefferson County by law enforcement in another incident involving a stolen car." The piece said that Millsap "was shot by law enforcement personnel while attempting to flee a felony stop initiated by Colorado State Patrol with back up from Jefferson County Sheriff’s deputies and a Golden Police officer."

The amended version of the lawsuit, filed in July 2020, has a very different tone. The "general allegations" section of the complaint notes that Trooper Retana was on a routine patrol around 8:30 p.m. on November 4 when he came across a tan 2002 Toyota 4Runner pulled over on Highway 6. He initially thought the SUV had been abandoned, but after running the plates and learning it had been reported stolen out of Louisville, he moved toward the vehicle and discovered that two people were asleep inside the cab: Millsap and a companion.

Shortly thereafter, other law enforcement officers arrived to assist, including a Golden police officer and two deputies with the Jefferson County Sheriff's Office. They knocked on the car's windows, awakening the occupants — and a couple of minutes later, "the driver of the 4Runner started the vehicle and slowly drove around the police officers and their cars," the lawsuit states. "The 4Runner never once drove straight at any of the officers or maneuvered in a reckless manner." 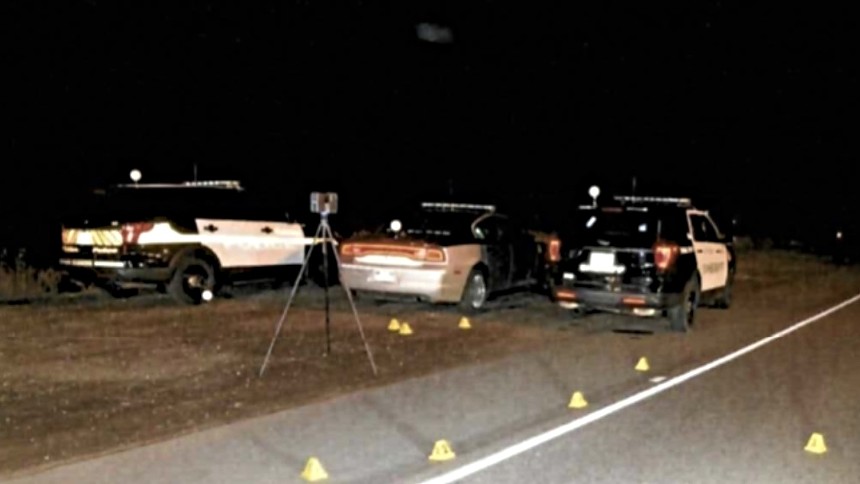 A photo included in the amended lawsuit shows a proliferation of evidence markers on the roadway.
Baumgartner Law
The suit contends that the SUV had already cleared the officers' position when Retana began shooting into it. He fired at least four rounds, with one of them striking Millsap in the right-rear portion of his head. The wound proved fatal.

In interviews, Retana and one of the Jeffco deputies, Vincent Alonso, both maintained that "a single shot was fired from the 4Runner as it was driving away" — a claim the suit describes as "demonstrably false and fabricated after the fact to avoid accountability for unlawfully using deadly force." It also stresses that the vehicle itself was not a danger to the officers, since it had already passed them when Retana began firing. Yet a probe conducted by the Jefferson County District Attorney's Office deemed the shooting justified.

Assorted individuals with the Jeffco sheriff's department were originally listed as defendants in the lawsuit, but in July 2021, U.S. District Judge R. Brooke Jackson dismissed all claims against Alonso and others associated with the office. On July 25 of this year, the Colorado Attorney General's Office filed a motion for summary judgment intended to similarly clear Retana, with the defense firing back the next month.

"The state tried very hard to have this case dismissed on qualified-immunity grounds," Simeson summarizes. "They failed once, and they tried again recently with a motion for summary judgment. They saw they were going to lose that motion and wanted to mitigate the risk of going to trial. Hence the settlement we reached."

That was on September 26, and details of the settlement have not yet been made public.

Westword filed a Colorado Open Records Act request for information; its receipt was confirmed by Colorado Attorney General's Office spokesperson Lawrence Pacheco, who said, "We will respond according to the statute." According to CORA, public records shall be made available "within a reasonable time after the request" — three working days in most cases, but not longer than seven. The Colorado State Patrol declined to comment; a spokesman stated that the case has not yet been "finalized."

For his part, Simeson says that "nobody — from the AG’s office to the officers involved in Ryan Millsap’s death — has ever apologized to Ryan’s mother for killing her son. This is a story about the state admitting one of their officers screwed up and their failure to do the right thing in the end."

Click to read Dianna Millsap v. Colorado State Patrol, et al.
KEEP WESTWORD FREE... Since we started Westword, it has been defined as the free, independent voice of Denver, and we'd like to keep it that way. With local media under siege, it's more important than ever for us to rally support behind funding our local journalism. You can help by participating in our "I Support" program, allowing us to keep offering readers access to our incisive coverage of local news, food and culture with no paywalls.
Make a one-time donation today for as little as $1.