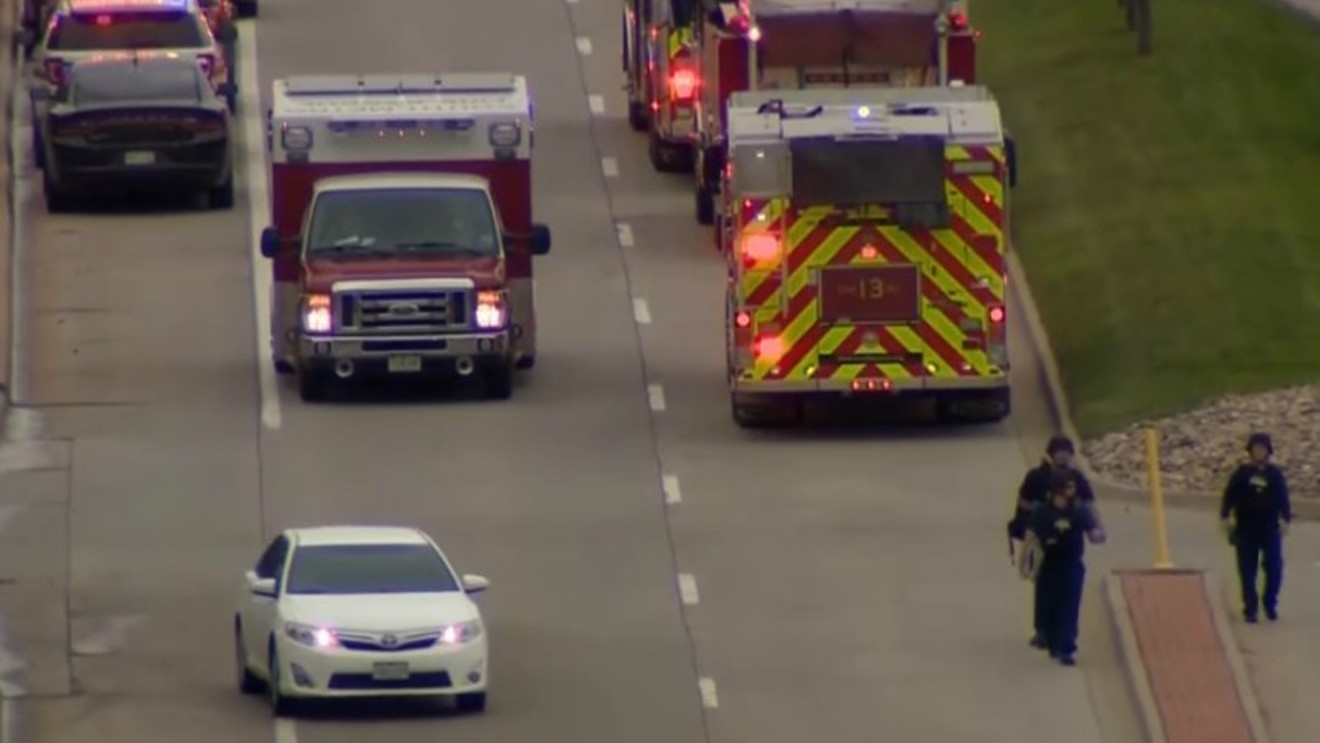 After the shooting. 9News via YouTube
Denver TV stations responded quickly to the STEM School Highlands Ranch shooting, which killed one student and injured eight others, preempting previously scheduled programming in order to offer wall-to-wall commercial-free updates about the tragic situation for several hours during the afternoon of May 7, and the coverage I saw was uniformly first-rate.

The quality makes sense for the saddest possible reason: Such incidents seem to happen so often that the broadcasters know the drill extremely well.

Too bad they get so much practice.

Fewer than three weeks ago, CBS4, Denver7, 9News and Fox31 went through a very similar routine after news broke that an eighteen-year-old Florida girl obsessed with the April 20, 1999, attack on Columbine High School had traveled to Colorado just shy of the twenty-year mark since that tragedy and had purchased a shotgun. This revelation led to the cancellation of classes at schools across metro Denver on April 17 — a decision that was tinged with irony after the teen was found dead and a subsequent autopsy revealed that she'd taken her life the day before the sweeping closures.

Nationwide, there were at least 240 school shootings in the two decades after the Columbine assault, including three in the greater Denver area that got a great deal of attention: the 2006 murder of student Emily Keyes at Platte Canyon High School, a 2010 incident at Littleton's Deer Creek Middle School and the 2013 killing of student Claire Davis at Arapahoe High School. And that doesn't count situations such as an August 2018 shooting outside DSST Cole Middle School, during which a student was severely wounded.

Through covering these scenes and others like them, local stations have learned to avoid the excesses that  marked Columbine reportage, including the incessant distribution of unconfirmed information from unreliable sources and a laser focus on the killers that unintentionally led to their de facto glorification. Plenty of news agencies, including this one, have realized over time that minimizing the use of a shooter's name may serve a greater good by reducing the odds that a homicidal kid will be inspired to seek Internet fame by emulating such horrific behavior.

Another angle on the STEM School Highlands Ranch.
9News via YouTube
Of course, continuous coverage means some errors are going to be made given the fluidity of events and what is often a dearth of official information, particularly in the immediate aftermath of gunfire. But yesterday, the local TV anchors and reporters I caught went to great pains to make such a prospect plain by letting viewers know about the sources of the information amid regular warnings that details could and likely would shift. And for the most part, they did so seamlessly.

The way 9News handled yesterday's developments serves as an example. When I tuned in, around 3:45 p.m., anchors Kyle Clark and Tom Green were anticipating that a press conference by Douglas County Sheriff Tony Spurlock would take place in about fifteen minutes — but it didn't happen. Next, the pair were told that Spurlock would be stepping before the microphones at approximately 4:30 p.m., but that deadline came and went, too, before he finally made an appearance.

Rather than hemming and hawing, Clark and Green kept things moving during the interim by jumping to different reporters on the scene as well as pre-recorded segments, including one with a man living near the school who'd aided an injured student, graphics and maps that helped folks unfamiliar with the area get a better idea about the lay of the land, and even weather updates from forecaster Kathy Sabine, since a severe thunderstorm was moving through the area at the very time parents were gathering at nearby Northridge Recreation Center to collect their traumatized kids.

Yes, some information was repeated, but other material was corrected — for example, the figures related to injured students, which vacillated from seven to nine throughout the afternoon. And after Spurlock spoke, Clark and Green quickly moved to clarify statements the sheriff had made that might have seemed confusing.

For instance, Spurlock described the suspects as one male and one juvenile but both students, prompting Clark to point out that anyone eighteen and older is considered an adult in Colorado, while those seventeen and under are not. And Green spoke with much-appreciated honesty when he said that Spurlock's comments about the suspects being captured uninjured despite live fire and so-called struggles with law enforcement was hard to understand — suggesting that the account lacked key details.

The teams at CBS4, Denver7 and Fox31 had plenty of strong moments, too, and their combined efforts showed why TV news remains important at times like this one despite — or perhaps because of — social media's easy accessibility and instant gratification (dubious though it may prove in the long run). But the excellence of their work speaks as much to the frequency with which mass shootings happen in Colorado, and throughout the United States, as it does to their particular talents.

Bet they'd trade being a little worse with this tool kit for using it less often.
KEEP WESTWORD FREE... Since we started Westword, it has been defined as the free, independent voice of Denver, and we'd like to keep it that way. With local media under siege, it's more important than ever for us to rally support behind funding our local journalism. You can help by participating in our "I Support" program, allowing us to keep offering readers access to our incisive coverage of local news, food and culture with no paywalls.
Make a one-time donation today for as little as $1.