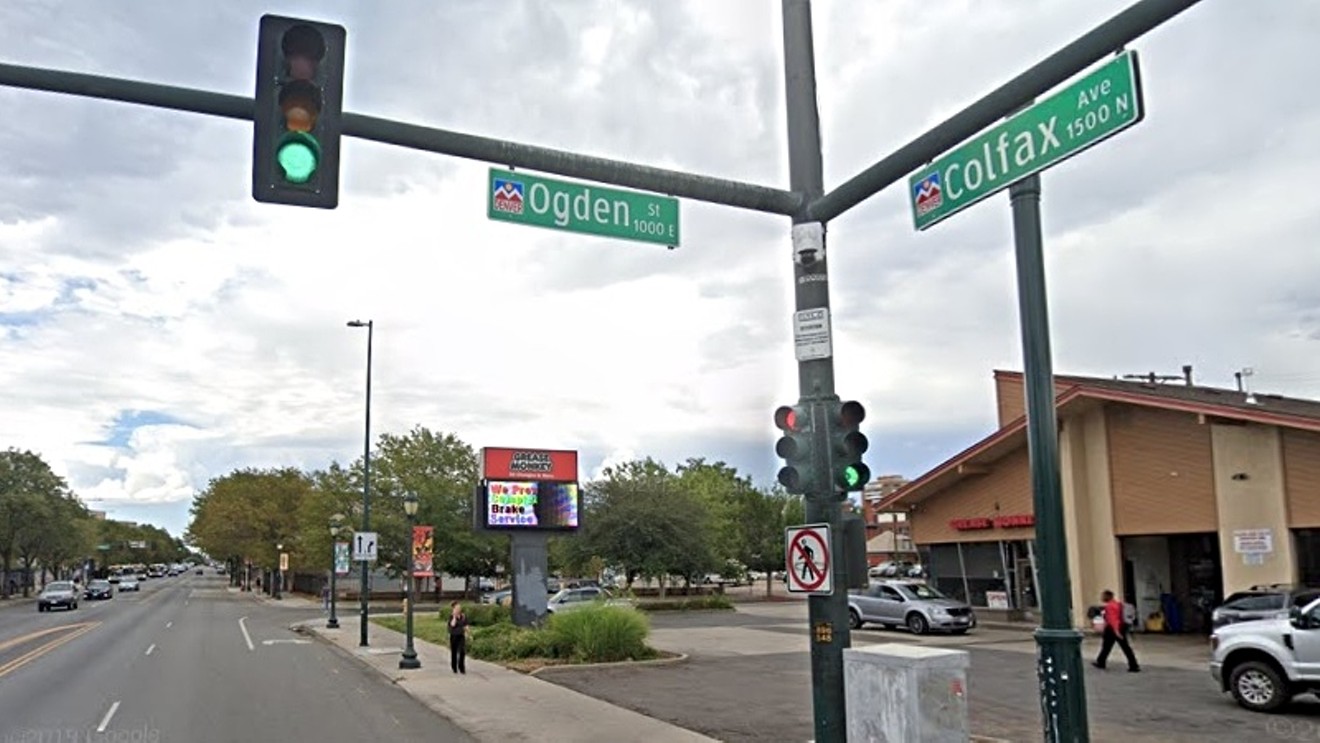 Eastbound and westbound Colfax Avenue was closed for hours late on June 27 following a nearby shooting. Google Maps
Mondays aren't typically associated with gun violence in metro Denver. But on June 27, at least seven separate shootings took place around the city, resulting in two deaths — one involving a suspect killed by police — and multiple injuries. A victim among the latter group was critically injured in an incident that closed a busy section of Colfax Avenue for more than an hour last night.

The Denver Police Department reported four of the shootings via Twitter. At 1:50 p.m., the DPD announced that it was investigating a shooting on the 3400 block of Walnut Street, in the Five Points neighborhood; one victim was transported to a nearby hospital.

Less than an hour later, at 2:32 p.m., Denver police opened an investigation into a shooting near the intersection of West Ninth Avenue and Sheridan Boulevard, in the Villa Park neighborhood. The victim's injuries weren't considered life-threatening.

A third Denver shooting took place on the 2600 block of West Mexico Avenue, in the Ruby Hill neighborhood, later in the day. The male victim required hospitalization but is expected to survive.

The initial bulletin for a fourth shooting, this one on the 1000 block of East Colfax Avenue, came at 9:35 p.m., and noted that one victim had been taken to a local hospital. A 9:55 p.m. update said the victim was in "critical and stable condition" and revealed that westbound and eastbound Colfax had been shut down from Ogden to Marion streets. The DPD tweeted that the route had been reopened at 11:29 p.m.

The Aurora Police Department reported two shootings on Monday — and the first one, announced in a 12:48 a.m. tweet, proved lethal. The alert stated that the shooting had happened near East 13th Avenue and Ursula Street; at 10:54 a.m., department representatives confirmed that the person shot, a twenty-year-old woman, had been declared dead and a homicide investigation was underway.

The site of the next Aurora shooting was City Park, at Dayton Street and East 16th Avenue. In a 9:39 p.m. tweet, Aurora Police said that officers from all three of its police districts were investigating the episode, in which two males and one female in their early twenties were wounded. Follow-up tweets added details — among them that the trio had been part of a large gathering at the park and their wounds were not life-threatening.

Shortly thereafter, at 11:14 p.m., the Arvada Police Department tweeted that an officer-involved shooting had occurred on the 7400 block of West 61st Avenue — and the details released just after noon revealed another fatality.

At 9:07 p.m. on June 27, according to the department's account, Arvada officers were dispatched to the area near West 58th Avenue and Wadsworth Boulevard in regard to a stolen vehicle — a Ford F-550 tractor-trailer tire-repair vehicle that had been left unattended while the motor was running. At 9:25 p.m.,  officers used an in-vehicle tracker to trace the vehicle to a dead-end street east of Wadsworth near 7400 West 61st. As officers approached the vehicle, which was unoccupied with the engine idling, a suspect is said to have climbed aboard and attempted to flee. At that point, multiple law enforcement officers opened fire. The suspect, identified as forty-year-old Isaiah P. Proctor, was pronounced dead at an area hospital.

Those with information about any of these incidents can contact Metro Denver Crime Stoppers at 720-913-STOP (7867).

This post has been updated to include details of a fatal police shooting in Arvada.
KEEP WESTWORD FREE... Since we started Westword, it has been defined as the free, independent voice of Denver, and we'd like to keep it that way. With local media under siege, it's more important than ever for us to rally support behind funding our local journalism. You can help by participating in our "I Support" program, allowing us to keep offering readers access to our incisive coverage of local news, food and culture with no paywalls.
Make a one-time donation today for as little as $1.