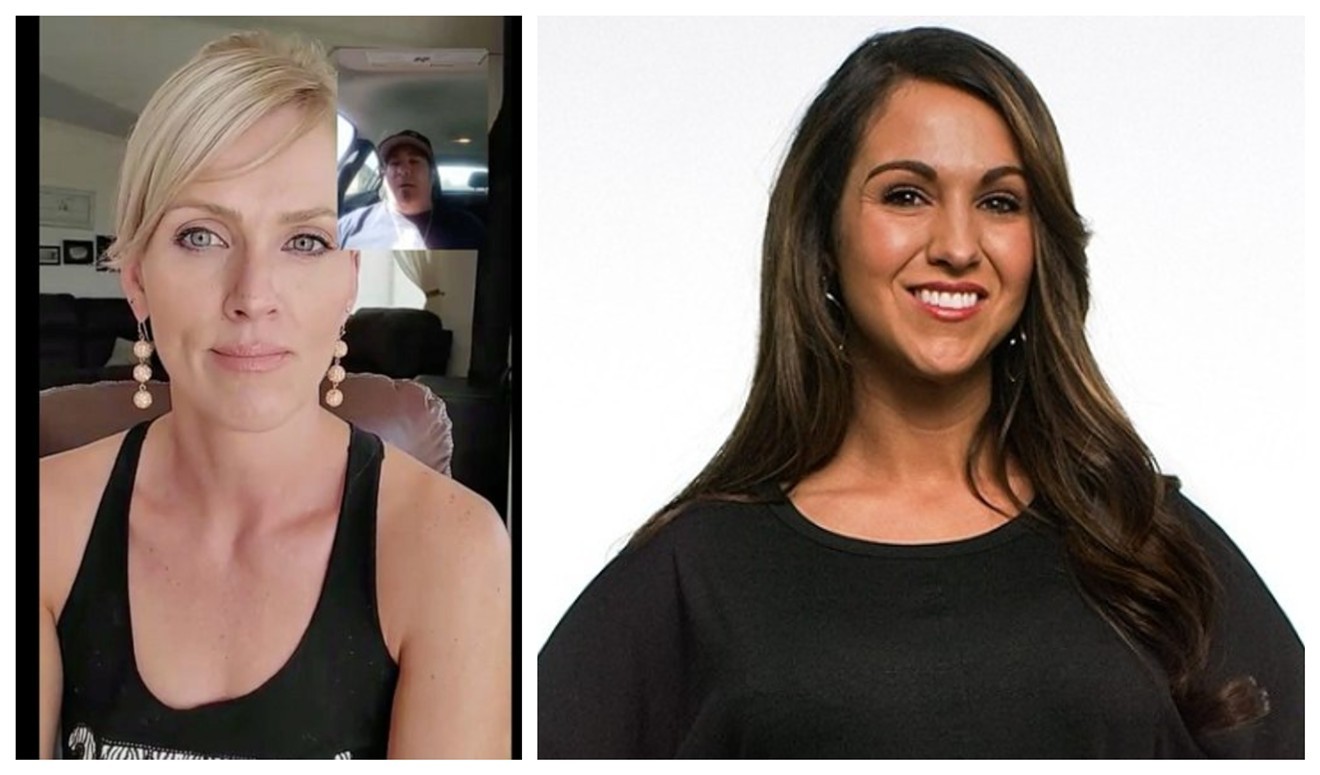 Sherronna Bishop in a screen capture from a video chat with a self-proclaimed Proud Boys member identified as "Rob" and a portrait of Lauren Boebert from our October 2020 cover story. ABC News/Seth Schaeffer-Hoptocopter Films
On November 16, an FBI raid on the home of Mesa County Clerk Tina Peters, who's among the elected officials most vigorously pushing false claims of election fraud, made headlines nationwide. So, too, did alleged horror stories of the ordeal she shared with MyPillow CEO and Donald Trump ally Mike Lindell — an account that Colorado Attorney General Phil Weiser and 21st Judicial District Attorney Dan Rubinstein have both denied.

Far less attention has been paid to a simultaneous FBI search of the home in Silt belonging to Sherronna Bishop, former campaign manager for U.S. Representative Lauren Boebert. Bishop, one of three Peters associates whose homes were searched in relation to election-data leaks, told Westword that the feds used a battering ram to enter her abode and terrorized her children while refusing to say why they had invaded her privacy. In her words: "This is an unprecedented day in America."

Bishop is a controversial figure, as evidenced by our October 2020 post about an ABC News report divulging that she'd praised the far-right, neo-fascist group the Proud Boys in a Facebook video in 2019, and showcasing a quote from Boebert during a May 2020 appearance on a "QAnon-friendly podcast," according to ABC. "Everything that I've heard of Q, I hope that this is real," Boebert had said. "Because it only means that America is getting stronger and better, and people are returning to conservative values."

More recently, Bishop teamed up with Peters in "Searching for the Truth," an online event this September sponsored by Woodland Park's Andrew Wommack Ministries, which was sued by the State of Colorado last year over its refusal to abide by COVID-19 safety protocols. (The organization has twice been declared an outbreak site by the Colorado Department of Public Health and Environment.) The fiction that Trump was unfairly robbed of a second presidential term was the main topic, as seen in the video below:
In her communication with Westword about the raid, conducted via text message, Bishop began by introducing herself: "My name is Sherronna Bishop, founder of America's Mom. As an active mother, I have been a vocal supporter of parent's rights and unmasking children in our schools."

On the morning of November 16, she continued, "while schooling my youngest children, the FBI along with Mesa County investigator Matthew Struwe [his name is actually Michael Struwe] decided it was necessary to bust open my front door with a battering ram and put me in handcuffs while they trampled through my home terrifying my family. My two youngest children were present and watched all of this occur. My daughter was pulled around by her hoodie by one of the FBI agents."

According to Bishop, "I asked repeatedly what this was about and was denied an answer while they 'cleared' my home. It is still unclear to me why the FBI and the Mesa County DA, Dan Rubenstein, believed such force was necessary."

Bishop contended that she has "been available and transparent to any organization that wanted to speak with me, even initiating a briefing in September with Mesa County officials and the DA's office to present election information.... Even though I have gone through great lengths to be transparent about my positions, the Biden administration's DOJ [Department of Justice] has made good on its threat to begin terrorizing parents who dare to speak out for their children and challenge election integrity."

Initially, Bishop provided no evidence of her battering ram assertion. But late November 18, she posted the following video, in which she claims that "Dan Rubinstein owes me a door":
After Peters began castigating law enforcement officials for their actions at her home, Weiser and Rubinstein jointly refuted her assertions on November 17. "We have reviewed a statement from Tina Peters’ legal defense fund that claims a level of force during the execution of this joint federal-state law enforcement operation," they stated. "At no time was force used on Ms. Peters or her home. Ms. Peters was allowed to move around her home and fix herself breakfast while agents gathered items before departing....We are issuing this statement to clear up inaccuracies about what occurred during yesterday’s enforcement action. We will continue to conduct a thorough investigation based on facts and the law, including using proper law enforcement tools such as the judicially authorized search that was executed properly in this matter."

After Bishop shared her claims with us, we reached out to both Rubinstein and the Colorado AG's office. That office's reply: "We dispute how some have characterized the law enforcement action carried out earlier this week in Mesa and Garfield Counties. This judicially authorized search was executed in a professional and lawful manner."
KEEP WESTWORD FREE... Since we started Westword, it has been defined as the free, independent voice of Denver, and we'd like to keep it that way. With local media under siege, it's more important than ever for us to rally support behind funding our local journalism. You can help by participating in our "I Support" program, allowing us to keep offering readers access to our incisive coverage of local news, food and culture with no paywalls.
Make a one-time donation today for as little as $1.