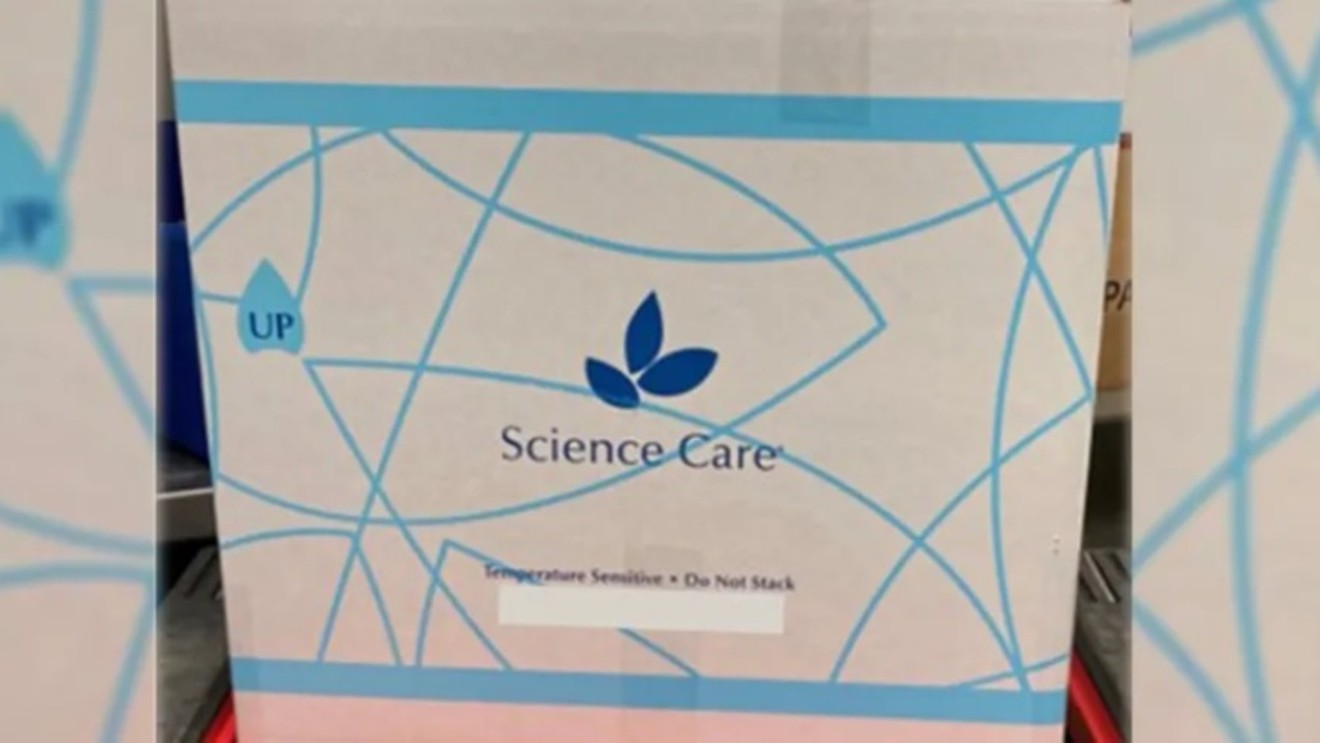 A box like the one containing that was stolen in Denver on March 3. Science Care via Fox13 Seattle
Attorney Michael Burg of the Burg Simpson law firm has been closely following reports of a box containing human heads that was stolen from a truck in Denver last week, for obvious reasons. He represents clients suing Montrose funeral-home owner Megan Hess over claims that she sold their loved ones' body parts without consent — Hess has been criminally indicted in the case — and he won a $58 million judgment against a body broker in Arizona that was subsequently reduced to $17 million before being fully restored last week.

Burg has also monitored pop-cultural responses to the incident, including a bit on The Late Show With Stephen Colbert in which the host noted, "The heads were destined for scientific research...and the CEO of the company that was shipping the heads says, 'This situation is extremely rare.' Did you hear that? Rare. Not unprecedented. 'We lost another box of heads, guys.'"

See the video below; the section about the theft begins at the two-minute mark.
For Burg, however, the situation is no laughing matter — and he thinks the focus of the reporting should be reversed. "All the stories are about who stole the heads, and I want to know who stole them, too. But that's way down the list as to what should be investigated here," he says.

"There are just so many unanswered questions. Whose heads were these? What was the purpose of getting the heads? Where were the heads being delivered to? Did the company have consent from the people who donated the heads? There's a lot of explaining that needs to be done."

One thing that's clear to Burg, however, is the value of the heads on the black market. In 2018, Westword  published what was purported to be a price list for body parts from Arizona's Biological Resource Center, Inc., that dated back to the 2015 period when the firm's owner, Steve Gore, pleaded guilty to taking part in a criminal enterprise. Based on that information, the article estimated that each head was worth "at least $500, and probably a lot more than that" — and Burg leans into the word "more." Based on his research, he believes the heads could bring in between $2,000 and $5,000 each.

According to the Denver Police Department, the details of the crime were simple: On the morning of March 3, a blue-and-white box containing the heads was snatched from a truck parked near East 23rd Avenue in the Central Park neighborhood. The box measured approximately 20 inches by 15 inches by 18 inches and was marked with the words "Science Care," the name of the company whose specialties include donating bodies to science.

Science Care, founded in 2000, is a large concern, with facilities in California, Texas and Arizona, as well as a local branch in Aurora. The "About" page on the operation's website contends that it's "the leading body donation authority in the world, and we set the industry standard that families have come to trust. Our commitment to the highest levels of safety and quality includes lobbying for responsible non-transplant tissue banking, meeting or exceeding all OSHA standards, and safe blood testing." The section stresses that Science Care has been accredited by the American Association of Tissue Banks and licensed by the State of New York Department of Health.

In a statement to Westword that's identical to one referenced by Colbert, chief executive officer and program director Tricia Hammett maintains that "as the industry leader, Science Care is responsible for helping to establish and carry out standards for the non-transplant tissue-banking industry. Science Care links donors who choose to donate their body to science with medical researchers and educators all over the world, leading to medical research and training that improves the quality of life for all of us. As the first accredited non-transplant tissue bank in the world, we pride ourselves on compliance and safety in everything we do."

This is how she describes the theft: "Recently, an incident occurred in the Denver area where a sealed box containing donated tissues was stolen from a secured truck operated by a third-party specializing in the logistics of donated tissues. The secured truck was in the process of returning the tissue to Science Care after a medical training event. Unknown individuals illegally broke into the truck and robbed it of the Science Care box. We were made aware of the theft immediately, and we have been working closely with local Denver authorities to investigate this crime. We are doing everything we can to locate the stolen tissue and protect the community. Due to the sensitive nature of our business, and as there are several ongoing investigations, we do not have any further comment on this criminal matter."

Next comes the reference to the situation being "extremely rare." Hammett then adds: "We appreciate the attention the media has brought to the community to help assist us in locating the stolen box. ... If anyone has any information on this crime, or on the whereabouts of the box or donated tissue, we urge you to please contact the Denver police at 720-913-2000 or Science Care at [email protected] We look forward to a safe resolution of this situation."

These remarks aren't nearly enough for Burg. Although he emphasizes that he's not casting aspersions on Science Care, he laments that the sale of body parts has little oversight. "The only states in the country that have any type of regulation are Arizona, as a result of our case, and there's a minor one in Colorado," he notes. That's the Human Remains Disposition Sale Businesses Act, which forbids a person from owning more than 10 percent indirect interest in a funeral home or crematory while simultaneously having an interest in what's termed a "non-transplant tissue bank," or body broker. The act also requires such tissue banks to register with state regulators and keep records that are available to interested parties.

The Wild West aspect of body-part sales was noted in a 2019 piece from The Daily Show With Trevor Noah that Burg refers to as "funny, but really not that funny, because they made the point that you can't cut someone's hair without getting a license, you can't drive a car without passing a test and getting a license, you can't do nails, pedicures and manicures without having a license, but you can open a body-donation business with no qualifications, no licensure, no supervision and no regulations in most places across the country."

Here's The Daily Show segment:
Burg would like to see the Colorado Attorney General's Office open an investigation into the stolen box of heads. "The whole Arizona case came as a result of four heads shipped to the Middle East that were leaking as they went through Customs," he explains. "That's when they raided the offices in Arizona and raided other body brokers in Illinois and Detroit — and a number of those people were charged with felonies and went to jail."

Westword has reached out to the Colorado Attorney General's Office regarding Burg's suggestion, but has not yet received a response.

In the meantime, Burg argues, "It's time for all the states and the federal government to regulate this, just like they regulate organ donation. They need to make sure that people who are vulnerable because they've lost a loved one are protected, because if they find out something happened to their loved one's body, they have so much guilt. That should never happen."
KEEP WESTWORD FREE... Since we started Westword, it has been defined as the free, independent voice of Denver, and we'd like to keep it that way. With local media under siege, it's more important than ever for us to rally support behind funding our local journalism. You can help by participating in our "I Support" program, allowing us to keep offering readers access to our incisive coverage of local news, food and culture with no paywalls.
Make a one-time donation today for as little as $1.