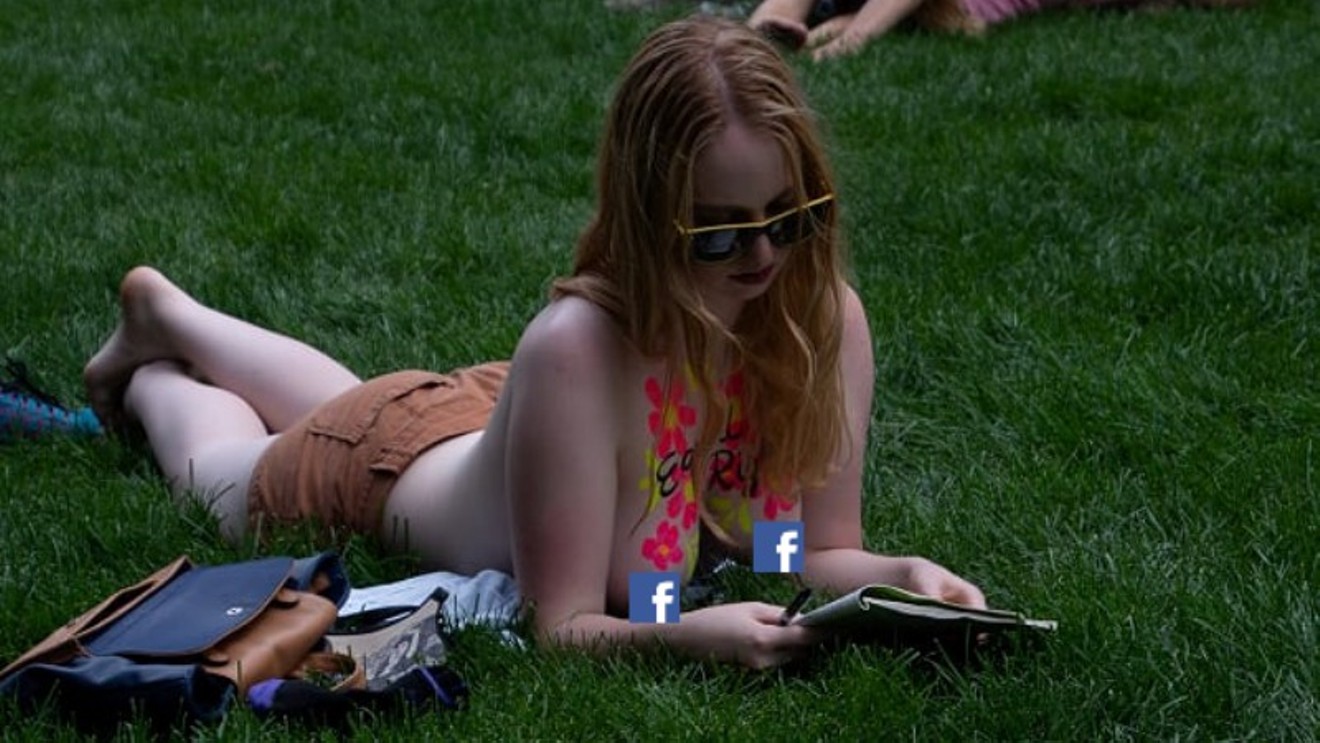 Michael Mark Photography courtesy of Matt Wilson
The sixth-annual Denver GoTopless Day took place on Sunday, August 26, and according to Matt Wilson, who helped organize the body-positive, equality-themed event for the fourth consecutive year, the vibe was inspiring, with the empowering aspects of the gathering dwarfing a handful of critical responses from passersby.

Last year's Denver GoTopless day attracted more than 1,000 people, and while Wilson, corresponding via Facebook Messenger, doesn't have any crowd estimates yet, he was thrilled by the wide variety of folks who took part in the newly expanded get-together, which supplemented the traditional parade along the 16th Street Mall to the Colorado State Capitol and Civic Center Park with live music at Skyline Park and more.

"At this year's rally, we had participants from all over Colorado and even from out of state," Wilson notes. "So many different kinds of people attended. We had infants nursing, parents brought their kids. We had teenagers and college kids, grandparents and retirees. All races, all body types, rich and poor, all embracing the joy of such a unique experience: topless equality."

Co-organizer Matt Wilson alongside Bambi McMillan, who put together the first Denver GoTopless Day in 2013.
Michael Mark Photography courtesy of Matt Wilson
In Wilson's view, "It was beautiful to behold: People kicking around a beach ball, other people dancing, some lounging and listening to music or reading a book, and others simply sunbathing."

Among the biggest misconceptions about Denver GoTopless Day, according to Mia Jean, Wilson's co-organizer, is that public toplessness for women is against the law in the Mile High City. It's not — but despite education efforts, the topic definitely came up again yesterday. 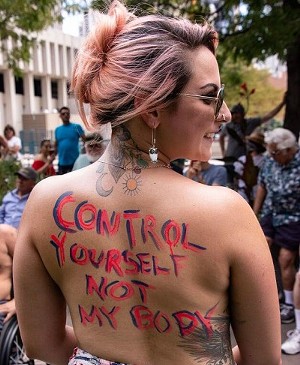 A marcher with a message.
Michael Mark Photography courtesy of Matt Wilson
"I walked by so many conversations, within the crowd and at the welcome table," Wilson recalls. "So many people hadn't known that it was legal or even feasible. People were asking the question 'Why? Why do we have such a double standard when reacting to male vs. female bodies?'"

Still, he goes on, "something really stuck with me today: the contrast in reactions between participants and bystanders."

As he points out, "We always get smiles and thumb-ups, plus those who, comprehending what we're about, spontaneously join in.  But we also see shock and consternation. Knee-jerk judgment. Husbands studiously looking elsewhere for fear of spousal retaliation. Or even worse: Parents covering children's eyes." 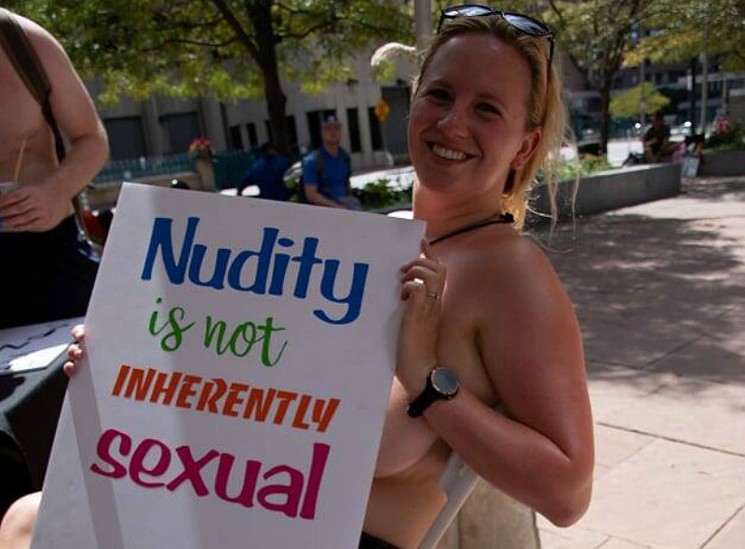 Another sign of the day.
Michael Mark Photography courtesy of Matt Wilson
Wilson wonders: "What does it mean that so many react that way? When I hear 'Women already have equal rights!,' I ask: If that were true, why should topless women be such a scandal? When parents cover kids' eyes, what are we really teaching them in that moment? We don't do that when seeing men."

To him, "These negative reactions prove that women are not seen as equals. We've come a long way, but we've still got a ways to go. And that's why we do this. Because when it comes to teaching ourselves that women's bodies are somehow 'bad' while men's are just 'normal,' there's a better choice. Participants prove it. We just need more people to see it."

A follow-up meeting in regard to the latest Denver GoTopless Day is scheduled to take place on Saturday, September 8, in Washington Park. "It'll be a chill event — some Frisbees and beach balls, kind of a picnic-in-the-park theme," Wilson reveals. Details will be coming soon on the group's Facebook page and DenverGoTopless.com.
KEEP WESTWORD FREE... Since we started Westword, it has been defined as the free, independent voice of Denver, and we'd like to keep it that way. With local media under siege, it's more important than ever for us to rally support behind funding our local journalism. You can help by participating in our "I Support" program, allowing us to keep offering readers access to our incisive coverage of local news, food and culture with no paywalls.
Make a one-time donation today for as little as $1.