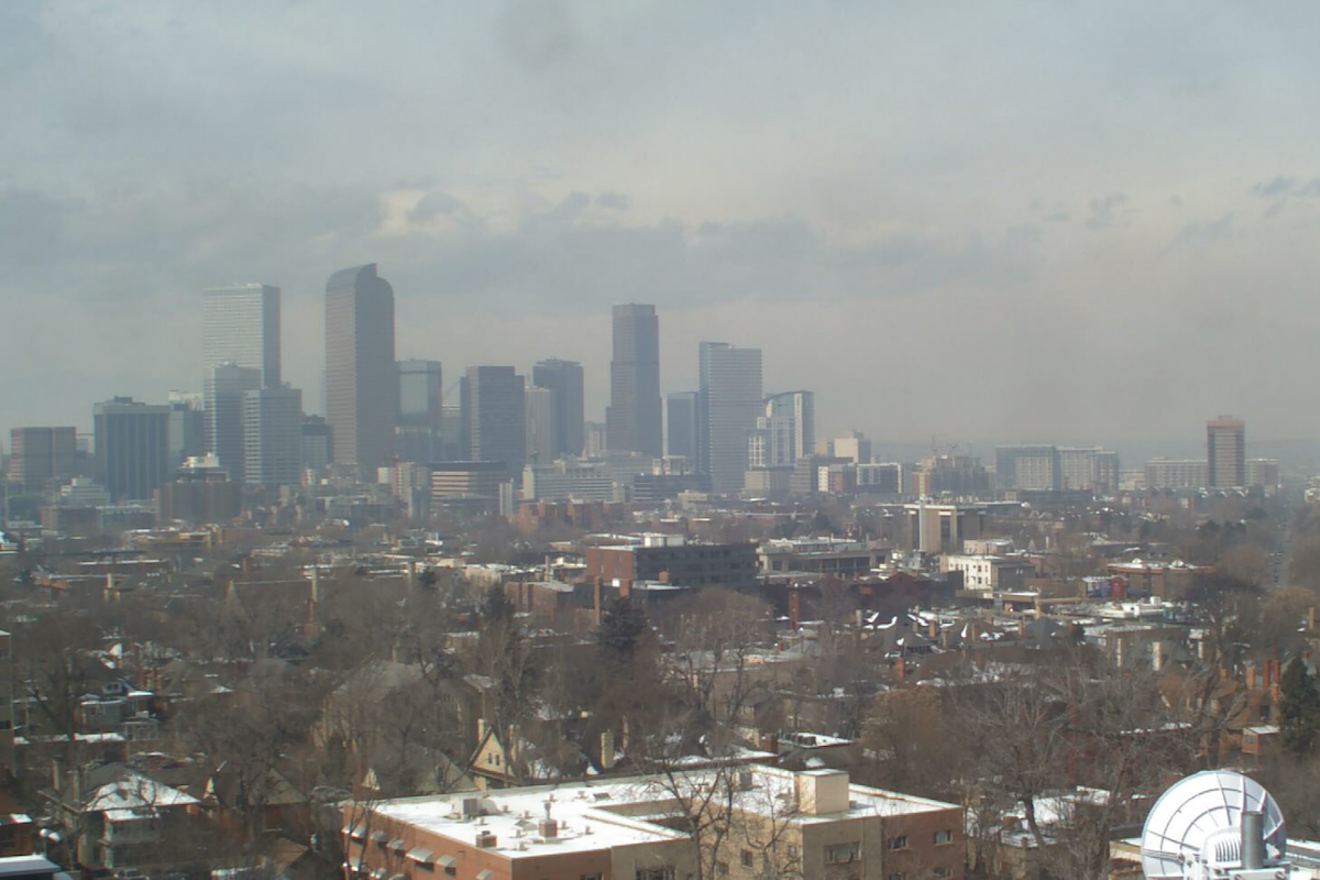 CDPHE
Weather patterns and local sources of pollution combined last week to cause the return of Denver's notorious “brown cloud,” the layer of smog over the city that reached its peak in the 1970s and ’80s. And if we're not careful, its return could become a regular event.

Denver’s Air Quality Index (AQI) reached a high of 154 on Wednesday, March 6, exceeding the threshold for unhealthy levels of pollution on the scale set by the Environmental Protection Agency. It’s highly unusual for Denver to have such high levels of smog at this time of year; Wednesday’s AQI was the highest recorded in the month of March since 1983, according to EPA data.

Denver’s air will be in better shape today, though it may not look like it. In an advisory issued yesterday, March 10, state officials said they expect air quality to remain at moderate levels on Monday, but declared an “Action Day for Visibility,” meaning that Denver-area residents are prohibited from indoor burning and asked to limit their driving until at least 4 p.m. today.

Last week’s smog was composed primarily of fine particulate matter, a category of pollutants including dust, soot and other tiny airborne particles that negatively impact human health. Most particle pollution isn’t emitted directly, but forms through chemical reactions in the atmosphere between precursors like nitrogen oxides and sulfur dioxide.

In the winter months, smog is typically caused by an inversion, a weather phenomenon in which cold air near the Earth’s surface is trapped by a warmer layer above it. Last week’s inversion lasted for days, causing the brown cloud to settle and gradually get worse — but even so, such high concentrations of particle pollution are rare. Wednesday was just the ninth day in the past thirty years that Denver's AQI for fine particulate matter reached unhealthy levels, according to EPA data. 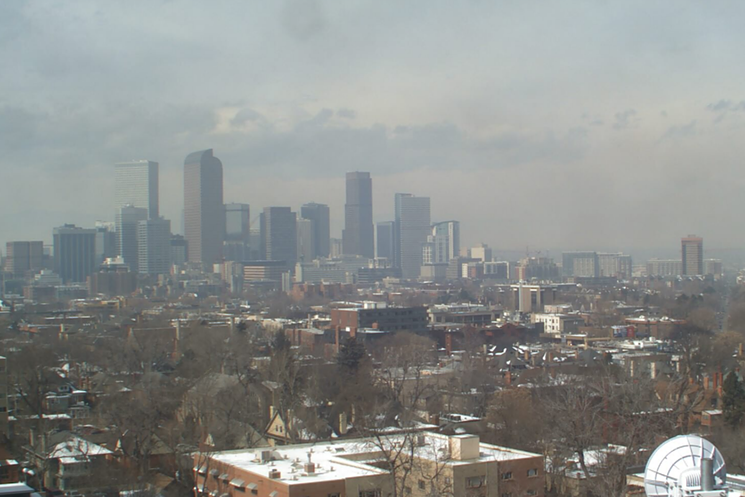 CDPHE
So why is the brown cloud able to make a comeback at all? In short: We’re driving too much, and we have too many sources of industrial pollution, including oil and gas facilities.

Like every other major city around the world, Denver is polluted on a daily basis by exhaust from cars, trucks and other gas-powered vehicles and machinery. Anything with an internal combustion engine contributes to smog, and reducing driving rates is among the best ways to achieve cleaner air. Mayor Michael Hancock’s administration has set a goal of reducing the number of commutes made in single-occupant vehicles to 60 percent by the end of next year and to 50 percent by 2030. But the most recent data available shows that figure stuck near 70 percent, and many public-transit initiatives remain unfunded while car-centric projects like the expansion of I-70 have moved forward.

One thing Denver has that many other cities don’t, however, is a major oil and gas patch right in its back yard. Studies have consistently shown that oil and gas facilities along the Front Range are major contributors to the region’s high levels of ozone, responsible for as much pollution as all its cars and trucks put together. In addition to releasing ozone-forming pollutants, oil and gas sites are known emitters of the chemical precursors for fine particulate matter.

Drilling has been inching steadily closer to Denver for years, with active fracking projects under way in communities like Thornton, Commerce City and Aurora. There are nearly a thousand new wells pending approval in Adams, Arapahoe and Boulder counties alone, according to state data. The fate of those applications, as well as any emissions regulations and inspection regimes they might be subject to, hangs in the balance as state legislators consider Senate Bill 181, a package of health and safety reforms proposed by Democrats and bitterly opposed by the oil and gas lobby.

The bad news is that if we manage not to make Denver’s smog problem worse on our own, climate change might do it for us. In the winter months, the world's warming climate could make pollution-trapping temperature inversions stronger, scientists found in a study published last month in the journal Climate Dynamics. And in a report released last year by the American Lung Association, researchers concluded that rising temperatures have already led to increases in high ozone days, threatening millions of people around the world with unhealthy levels of air pollution.
KEEP WESTWORD FREE... Since we started Westword, it has been defined as the free, independent voice of Denver, and we'd like to keep it that way. With local media under siege, it's more important than ever for us to rally support behind funding our local journalism. You can help by participating in our "I Support" program, allowing us to keep offering readers access to our incisive coverage of local news, food and culture with no paywalls.
Make a one-time donation today for as little as $1.