Fruition celebrates ten years on East Sixth Avenue in February. Westword
Some restaurants are timeless, feeling as if they've been around forever while somehow maintaining the energy and attraction of a brand-new eatery. Such is the case with Fruition, chef/owner Alex Seidel's tribute to Colorado's changing seasons that draws heavily from the farm he maintains just outside of Larkspur. Next month, Fruition turns ten years old, and to celebrate, Seidel is highlighting ten chefs who have come and gone — or stayed — at the restaurant at an anniversary dinner with food prepared by all of them. 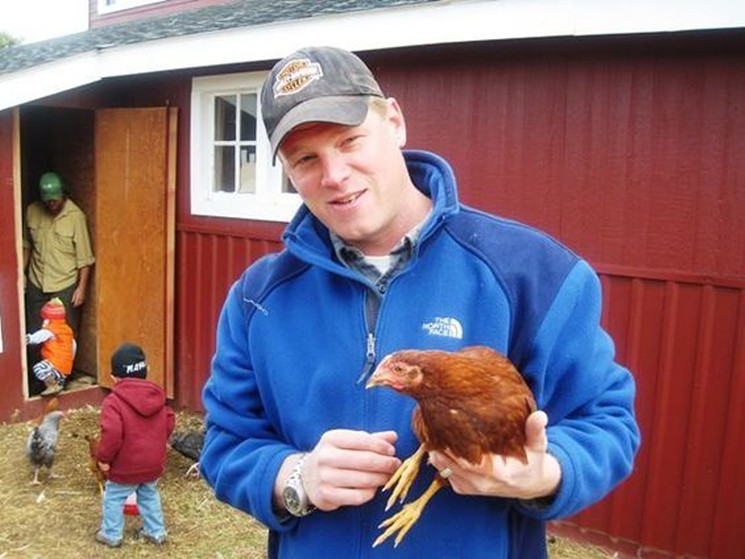 Alex Seidel at Fruition Farms, which provides dairy, produce and meat for his restaurant.
Westword
"I've been kicking around ideas for how to celebrate for the past year," the chef explains. The result of his ruminations will be a chance for the group of chefs to display their individual styles. "I told them that it's about them and where they're at in their careers," Seidel adds.

While the menu is still a work in progress, the format for the dinner has been set. Seating will be community style and will be limited to fifty guests to allow for a more intimate evening. "All the right people will be there — it will be just a celebration of good food," Seidel notes. And while he'll be working as hard as he always does, he also considers the evening a chance to celebrate ten years in business with his wife, friends, regular customers and colleagues.

Having so many cooks in the kitchen will be a challenge for Fruition, which has never hosted guest chefs, primarily due to the tight quarters in the kitchen; for that, Seidel uses the much more spacious facility at Mercantile. But camaraderie and great food will certainly prevail, just as it has for the past ten years at Fruition.

Reservations for the dinner, which will run $150 per person (with an optional $75 wine pairing), can be made only by calling the restaurant at 303-831-1962, rather than on Fruition's online reservation page.