MobCraft Beer will open in the early part of 2022. MobCraft Beer
One of the biggest brewery trends recently has been the opening of second (or even third) locations by all kinds of beer makers, large and small. At least two dozen breweries across the state have opened additional locations, or have announced plans to do so, in the past two years alone. Although not all of these second taprooms have brewing equipment, most maintain vibes similar to those of their original locations or add something new.

Of the fifteen or so breweries that opened in the Denver metro area in 2021 — from Greenwood Village to Westminster and from Aurora to Littleton — four were second or third locations.

Next year, at least six of the planned new breweries will fall into that category, while another — Wisconsin's MobCraft Beer — will open its first Colorado brewery, but its second overall. That leaves just two on the following list as brand-new entities. Still, the fact that new breweries are opening at all speaks well to the viability of the industry and consumers' continued desire for craft beer.

It's also just the beginning of what's to come in 2022. Two existing breweries, Crazy Mountain and Alpine Dog, plan to reopen in new locations. Another three to five breweries, some of them existing entities and some that are brand-new, already have tentative but unannounced spots for possible future openings — and there are plenty more, both new and existing, that are busy searching for an address.

But these nine that are planning to open in 2022 have already locked down locations:

Ratio Beerworks
Ratio Beerworks (second location)
2030 South Cherokee Street, Denver
Opening: January or February
Ratio Beerworks cheered residents of Denver's southern neighborhoods in February when it announced that it would take over the former home of Declaration Brewing with a new brewery and taproom. The large space features a patio that the brewery hopes to turn into "an oasis" in the city. The building will allow Ratio to greatly increase the amount of beer it brews and cans. It also means that Ratio can begin experimenting with new beers and collaborations — something it did on a very limited basis in the past. 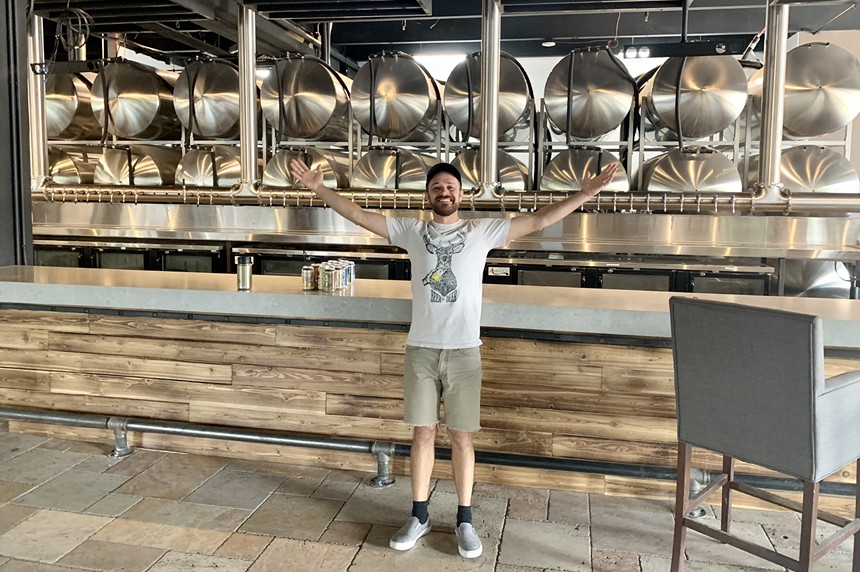 MobCraft Beer
MobCraft Beer
2403 Champa Street, Denver
Opening: Early 2022
MobCraft Beer, an unusual Wisconsin brewery that builds its sometimes wacky recipes based on customer votes, is moving into the former Liberati Brewing building in Curtis Park, where it will team up with Pueblo Mexican food restaurant Dee Tacko on a combined operation. The 12,000-square-foot space will be separated into two spaces: one for traditional sit-down dining and one with a "more casual taproom vibe" that includes lounge furniture and games. The interior will also feature new murals and barrel furniture from local artists and artisans. Henry Schwartz, who co-founded MobCraft in 2013, grew up in Colorado and is partnering with his cousin Justin Weber on the Denver outpost of MobCraft.

Left Hand Brewing
Left Hand Brewing (second location)
4180 Wynkoop Street, Denver
Opening: First quarter 2022
Left Hand Brewing will stage-dive into Denver in February when it opens a huge taproom and restaurant next to the Mission Ballroom on Brighton Boulevard. The 7,500-square-foot taproom won't have brewing equipment, but it will include a full menu, a large covered patio, an indoor-outdoor stage for live music, and private dining and event spaces. Colorado's third-largest independently owned craft brewery had been looking for the right location in Denver for more than a year as some of its local competitors, including New Belgium Brewing, Odell Brewing and Oskar Blues, have already established one or more outposts here. The space is part of a 90,000-square-foot retail, restaurant and office building complex.

New Image Brewing
New Image Brewing (second location)
9595 West 44th Avenue, Wheat Ridge
Opening: First half of 2022
New Image will open a second taproom and a small patio with a wood-fired pizza truck out in front of its four-year-old production space in Wheat Ridge sometime in the first half of 2022. A few months later, it plans to debut a 10,000-square-foot beer garden and food truck park on the other side of the building. The Arvada-based brewery, which specializes in hazy IPAs, was able to purchase the entire building in late 2021, and when construction starts, it will be the culmination of a four-year-old plan.

FlyteCo Brewing will replace Punch Bowl Social.
Amber Boutwell
FlyteCo Brewing (second location)
3120 Uinta Street, Denver
Opening: Summer 2022
FlyteCo Brewing, which opened two years ago near the corner of 38th Avenue and Tennyson Street, will make a big splash this year when it moves into a second location in the former Punch Bowl Social at the base of the historic Stapleton International Airport Control Tower building, which still stands in the Central Park neighborhood. The aviation-themed brewery will use the 17,000-square-foot spot as a second taproom, with a small-batch brewing system and a restaurant with a cocktail and wine menu. The owners also say they plan to keep many of the "game-focused elements installed by its predecessor, Punch Bowl Social, including bowling alleys, karaoke rooms, mini-golf and more."

Danico Brewing
Danico Brewing
66th Avenue and Tower Road, Denver
Opening: Late summer
After more than a year of pandemic-related delays, business partners Nikki Harwood and David Lotierzo, both former longtime AB InBev employees, were finally able to purchase a 1.5-acre lot where they plan to build Danico Brewing just off Peña Boulevard, near a string of motels serving Denver International Airport. The 6,400-square-foot brewery will have ten to fifteen beers on tap and a children's play area.

A rendering of Gold's Marketplace, where Live Slow Brewing will open in 2022.
Gold's Marketplace
Live Slow Brewing
2625 Kipling St., Wheat Ridge
Opening: Summer 2022
Joyride Brewing bartender Joe Malouff and his boss, Joyride co-owner Grant Babb, have taken over the former Paramount bowling alley in Wheat Ridge, where they will open Live Slow Brewing — and the plan is to keep six of the original twelve bowling lanes. Located in a shopping center that is being redeveloped as Gold's Marketplace, the 11,000-square-foot space will also include a small stage, garage doors, a twenty-barrel brewing system and bowling-appropriate fare like wings and tater tots.

4 Noses Brewing
4 Noses Brewing (second location)
4040 Dahlia Street, Denver
Opening: Late fall/early winter 2022
Broomfield's 4 Noses Brewing had a big week in October: Not only did it announce the purchase of Odd13 Brewing in Lafayette, but it unveiled plans for a large production facility — and a new taproom — at the northwestern edge of Denver’s Park Hill neighborhood. When it is complete in late 2022, the 22,000-square-foot warehouse will include a forty-barrel brewhouse and enable the company to expand production and packaging of both 4 Noses and Odd13 beers. Taproom details will be announced later.

Cerebral Brewing
Cerebral Brewing (second location)
9990 East Colfax Avenue, Aurora
Opening: 2022
After a years-long search for the right space, Cerebral Brewing bought an 18,000-square-foot former furniture warehouse in the heart of the Aurora Cultural Arts District, where it will open a huge new production and packaging facility and a barrel-aging cellar in March or April. The brewery, whose original location is on Colfax as well, also plans to open a retail store in the space where customers can buy merchandise and beer to go. After that, Cerebral will get to work on adding a taproom with a second-story mezzanine.
KEEP WESTWORD FREE... Since we started Westword, it has been defined as the free, independent voice of Denver, and we'd like to keep it that way. With local media under siege, it's more important than ever for us to rally support behind funding our local journalism. You can help by participating in our "I Support" program, allowing us to keep offering readers access to our incisive coverage of local news, food and culture with no paywalls.
Make a one-time donation today for as little as $1.