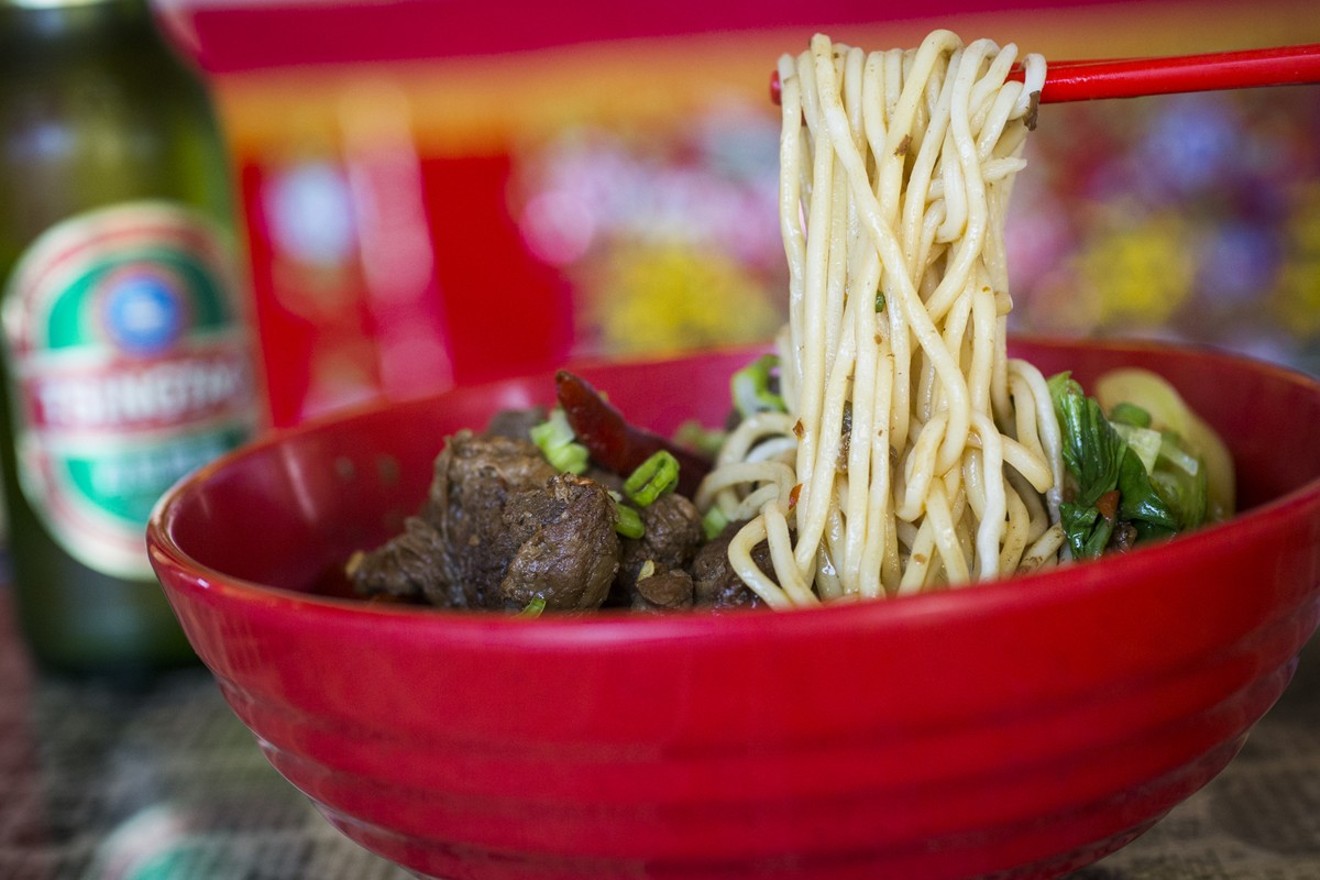 Housemade noodles at Zoe Ma Ma. Danielle Lirette
Let's get one thing straight before we proceed with this list of the ten best Chinese restaurants in Denver: "Chinese food" is a bit of a misnomer. China is a massive country with distinct regions, each of which has its own ingrained culinary tradition. It's more accurate to say Sichuan food or Yunnan food; the canons from these two provinces are about as similar to one another as German food is to Spanish, and that's before you dial into village-level dishes or techniques. In America, "Chinese food" has been a misnomer for a different reason: It's a descriptor of dishes you can only find in this country (although American-Chinese restaurants have begun to pop up in cities like Shanghai, for novelty). Luckily, long gone are the days when eating Chinese food in this city meant dipping into a carton of orange chicken and a bowl of egg drop soup. Now, regional highlights abound. By way of proof, this list traverses specialties from all over the Middle Kingdom, from Cantonese dim sum to spicy Sichuan fare to iconic Taiwanese beef noodle soup. We threw in a particularly good American-Chinese place, too, in case you occasionally feel nostalgic for the sweet-and-sour sauce of your youth.

Looking for our most recent picks? Here's our 2019 list of the best Chinese restaurants in Denver. China Jade makes the best Sichuan wontons in town.
Laura Shunk
China Jade
12203 Iliff Avenue, Aurora
303-755-8518
Hunan, Fujian and Sichuan fare dominates the Chinese menu at China Jade, an Aurora strip-mall restaurant where mid-afternoons find large gatherings of Chinese friends settling in for massive feasts. Start with the best Sichuan wontons in town — they’re on the menu here as "spicy taste shepherd’s purse wonton." Delicate wrappers hold aromatic pork meatballs in an exhilarating pool of lip-tingling chili oil; the same bold heat infuses the thick stew of mapo tofu. More adventurous eaters might appreciate all the fuss about Chinese chicken feet (it’s a textural thing; they’re fun to gnaw on), or dip into some stir-fried offal (pig’s blood, stomach and intestine all make the list). China Jade is a good place to push your horizons, but even a platter of stir-fried Napa cabbage can be transcendent here, deftly flash-fried as it is and presented crisp and slicked lightly with soy sauce. 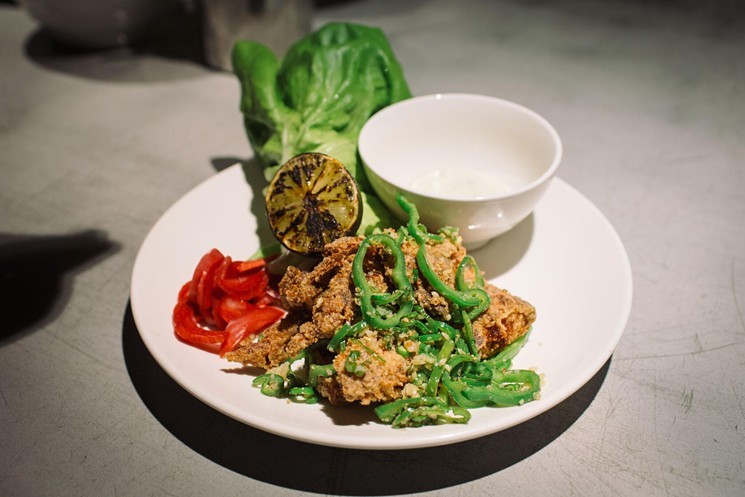 Hop Alley's soft-shell crab.
Adam Bove
Hop Alley
3500 Larimer Street
720-379-8340
This RiNo restaurant's name pays homage to Denver’s own Chinese history: Hop Alley was the once-thriving Chinatown that was burned down during riots in the 1880s. But the cooking — like the sleek, hip-hop-infused restaurant — is all modern. Dishes have their roots in regional specialties but are interpreted liberally: blending bone marrow into fried rice, for instance, is a stroke of genius; it gives the grains a nice, silky mouthfeel and umami addictiveness, upgrading fried rice from what’s basically a throwaway dish to a star. Beijing duck, normally served whole with pancakes, is reimagined into a wrap, with flaky scallion pancakes forming the shell. And we never skip the garlic shrimp noodles; a generous hit of black pepper gives the chewy strands a compelling boost not unlike a cacio e pepe pasta. Also an upgrade on the standard offering: Hop Alley’s drinks list. The cider and wine collection, in particular, is undersung and excellent. Little Chengdu's owner pulls noodles in the middle of the restaurant.
Mark Antonation
Little Chengdu
8101 East Belleview Avenue
303-220-0577
Little Chengdu’s English sign reads Blue Ocean, a generic name befitting of the generic American-Chinese menu that the restaurant offers its non-Chinese patrons by default. But don’t settle: Ask for the Chinese menu, which has been translated into English. Here you’ll access a raft of regional Chinese specialties, including two main highlights. The first is an all-you-can-eat hot pot experience; order your soup spicy or not (we prefer spicy), and eat your fill of shaved beef, meatballs, mushrooms and greens, cooked fondue-style and then swiped through a dipping sauce you assemble from the condiment bar (our perfect mix includes sesame oil, sesame paste and garlic). The second is the list of hand-pulled and Shaanxi-style knife-shaved noodles, which get pooled with chili oil or dropped into heady Lanzhou-style beef soup. You’ll need to go at night if you want to catch the noodle-stretcher in action. 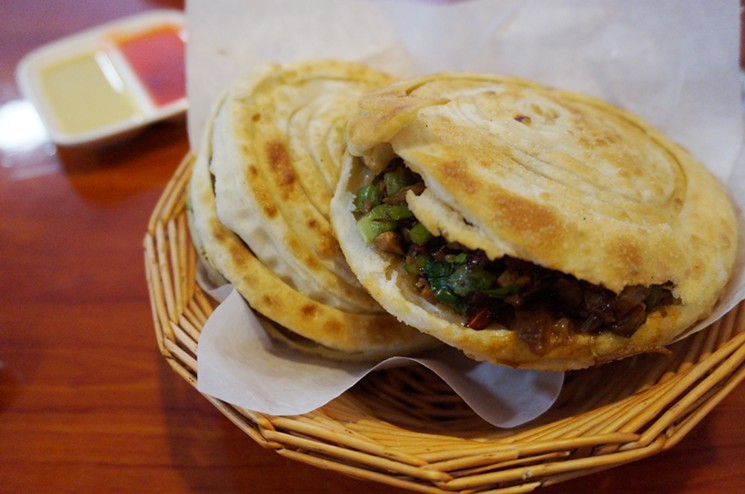 New Peach Garden's unceremoniously named pork sandwich is reason enough to seek this place out.
Mark Antonation
New Peach Garden
1111 Washington Avenue, Golden
303-279-0400
If Golden’s New Peach Garden served just the rou jia mo — unceremoniously named “pork sandwich” here —
the restaurant would still warrant a slot on this list. The ultra-savory stewed-pork sandwich is a northern Chinese specialty, built on sturdy flatbread and topped at New Peach with zippy green chilies. Unctuous and juicy, it’s an exceptional snack that surpasses other versions the world over. That you can supplement it with fare culled from the very best of rustic Chinese cooking — cumin lamb, tomato with egg, sautéed eggplant — is a bonus. If you order ahead, you can partake in a Beijing duck feast. Sesame chicken at Peter's.
Laura Shunk
Peter's Chinese Cafe
2609 East 12th Avenue
303-377-3218
Is American-Chinese food on its way out? After all, we spend most of our time ferreting out regional specialties these days, forsaking the takeout dishes that defined not only our childhoods, but also this country’s perception of Chinese cooking for at least a generation. It’s hard to go back to mu shu when you’ve had real Beijing duck, and wonton soup is much less interesting against fiery Sichuan dumplings (or chao shou). That said, if you occasionally feel nostalgic — as we do — for the egg drop soup, sesame chicken and General Tsos of a different era, your best bet in Denver is Peter’s, which has been serving the metro area well-executed versions of American-Chinese classics since the ’80s. Highlights here include the shatter-crisp sesame chicken, sticky with caramelization, and the thick-set, burnished scallion pancake, served with a deeply savory ginger-soy dipping sauce. Go at lunch, and your meal comes with fried rice and a delicate egg roll, sided with sweet-and-sour sauce and hot mustard. Don’t forget your fortune cookie, a distinctly American-Chinese invention inspired by a Japanese pastry.