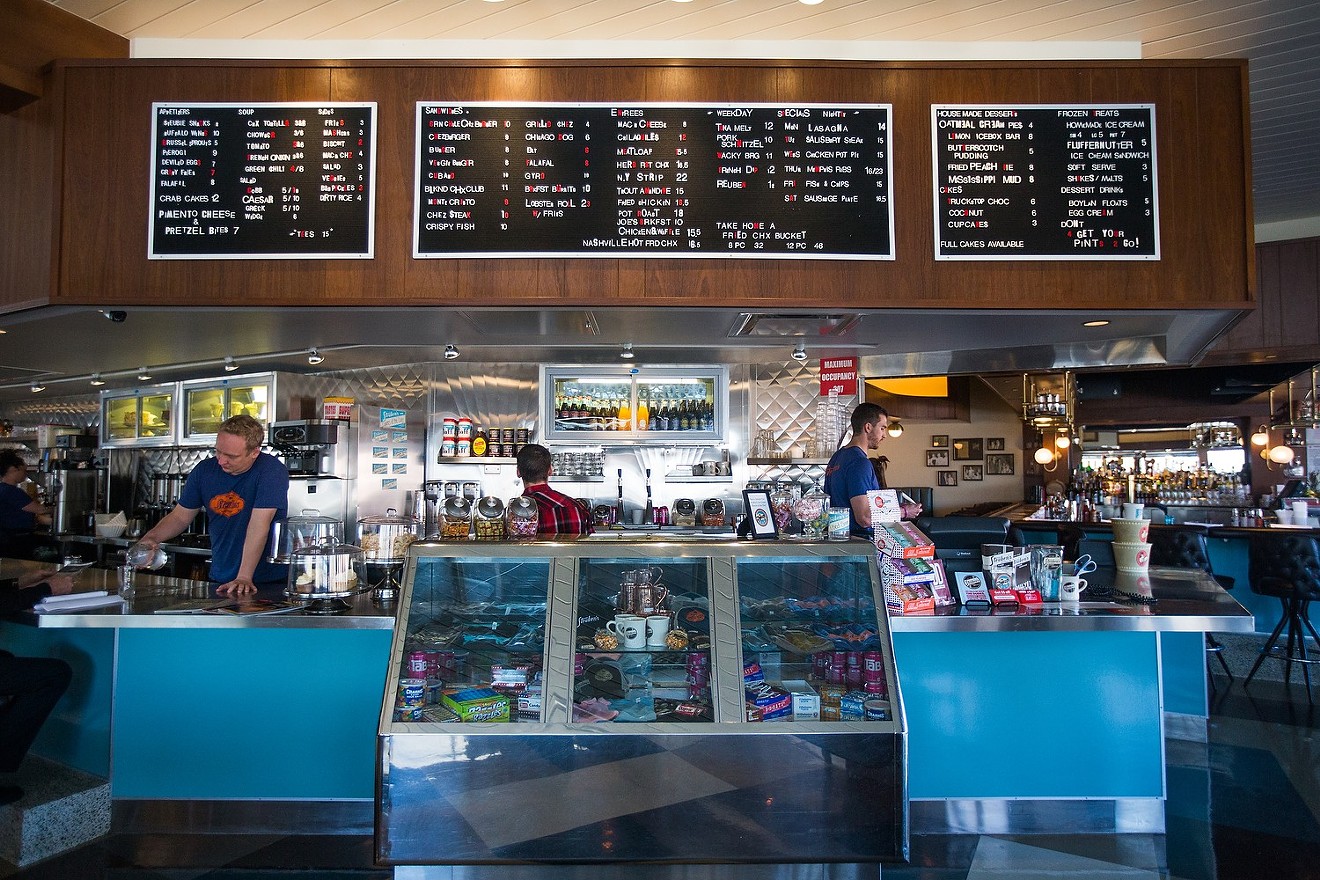 Steuben's Arvada is putting the "comfort" in comfort food this week as it invites you to a pajama brunch. Danielle Lirette

One of these things is not like the others: Big, boozy beers to cozy up with; deliciously warm and spicy chili; comfort food devoured in the comfort of your pajamas; and a patio opening — in October. Here are five of the best (if not the most thematically congruous) food and drink events for the weekend of Friday, October 19. And keep reading for future events through December. Improper City is finally opening its 12,000-square-foot patio this weekend.
Mark Antonation
Friday, October 19
Beer drinkers in the Centennial State are spoiled by choice; given the wealth of local breweries in Denver alone, it's easy to exist inside a Colorado craft-beer bubble and turn up our noses at offerings from elsewhere. But sometimes it's a good idea to see what's going on in the outside world, which is why we're recommending the definitively named The Festival, presented by beer importers Shelton Brothers, Inc. Denver Rock Drill, 1717 East 39th Avenue, is playing host to the beery shenanigans from 5 to 9 p.m. on Friday, October 19, and again from 3 to 7 p.m. on Saturday, October 20. While a few breweries from our state will be making an appearance, you'll want to show up for beers from locations as far-flung as Jordan, Estonia and Sweden. Tickets, $75, are still available on the Shelton Brothers website.

While it may seem counterintuitive  to open up outdoor space as the weather gets cooler, Improper City, 3201 Walnut Street, is staying true to its name and doing things the back-asswards way as it opens its expansive patio with a weekend of events. Starting on Friday, October 19, at 6 p.m., the pre-party gets going with live music and beers from Boulevard Brewing; on Saturday, October 20, the hunger games begin at 2 p.m., with free beer from Avery and 4 Noses and free roast pig while supplies last. Should you miss out on the pig, Gypsy Q, Fiesta Fusion and Areyto Puerto Rican Food will be on hand for your noshing needs. And on Sunday, October 21, show up at 11 a.m. for a free yoga class (RSVP at eventbrite.com), then stick around for brunch at noon and yappy hour (dogs in costume encouraged) at 1 p.m. Find all of the weekend's events on Improper City's Facebook page. 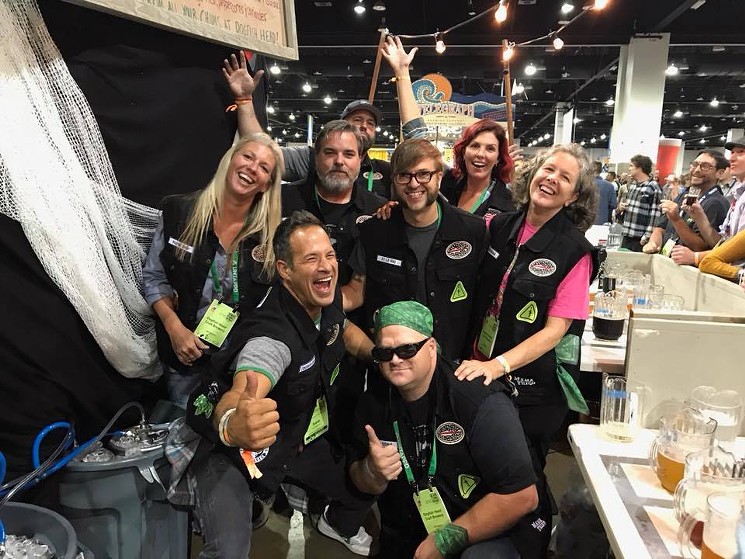 The Dogfish Head crew was just in town for the Great American Beer Festival.
Courtesy Dogfish Head Facebook
Saturday, October 20
Beer lovers who don't reside in Denver proper have a very good reason not to leave their suburban enclaves on Saturday, October 20 — and even devoted Denver dwellers may want to leave the concrete jungle when they hear about Dogfish Head Brewery's tap takeover of five Parry's Pizzeria and Bar locations (Highlands Ranch, Northglenn, Centennial, Johnstown and Longmont). From 11 a.m. to 10 p.m., the eateries will be tapping Dogfish Head brews alongside menu items specially created for the pairing. Beer highlights include 120 Minute IPA (2015 and 2018), bourbon barrel-aged Palo Santo Marron, Fruit-Full Fort, World Wide Stout and Puddin' Wine. Not all locations will be tapping all beers, so visit Facebook to make sure you'll get your hands on your beer of choice. 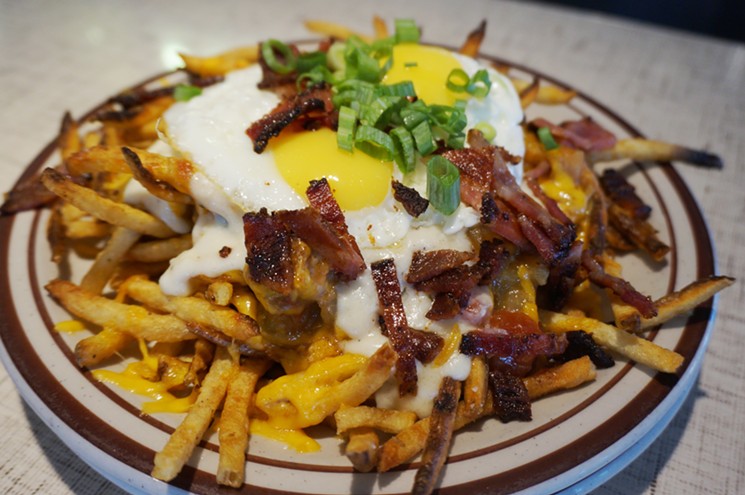 Get the Traffic Jam — fries, green chile, gravy, eggs and bacon — at Steuben's Arvada as it celebrates its first anniversary.
Mark Antonation
Sunday, October 21
You thought you couldn't get any more comfortable at Steuben's — the granddaddy of comfort food in Denver has been luring diners to its Uptown location with homey fare like gravy fries and meatloaf for years now — but that was before Steuben's Arvada, 7355 Ralston Road, let you know you don't even have to put on pants to eat there. That's right: On Sunday, October 21, the joint is celebrating its first year serving breakfast with a One Year Onesie Breakfast. From 8 to 10 p.m. (yes, you can eat eggs and bacon after dark), show up in your PJs for all-day breakfast specials, $5 mimosas and the chance to hang out with other poor souls who partied so hard the night before they can't find any clothing without a drawstring waist. Make your reservation on Reserve.com.

Feel all warm and fuzzy inside by doing a good deed — and filling your belly with chili. Joy Wine & Spirits, 1302 East Sixth Avenue, is hosting its eighth annual Chili Cookoff from noon to 4 p.m. on Sunday, October 21, to benefit Hunger Free Colorado, a nonprofit organization working to end hunger in the state. For just $25 ($20 with advance purchase at joywineandspirits.com), attendees can savor chili from restaurants including Fruition, Sushi Ronin, Old Major, Dunbar Kitchen & Tap House, Kaos Pizzeria and Uno Mas Taqueria y Cantina. Drinks aren't included in the ticket price, but with libations from Elevation Beer Co., Stem Ciders, Laws Whiskey House and more, you'll definitely want to save room (and a few bucks) for beverages.