Brandon Marshall for Westword
There are tips, there are tricks and there are strategies to tackling the Great American Beer Festival. You can have a plan or you can go in wholly unprepared...and probably have a good time anyway. But things in the massive Colorado Convention Center space change every year. Photo © Brewers Association
What to eat:
For years, it was a given that if you didn't eat something beforehand, you'd be stuck at GABF with just your pretzel necklace and a warmed-up hot dog for sustenance. But things began to improve a few years ago when the Colorado Convention Center diversified its lineup of food in a couple of stalls around the massive hall, and the fest's organizers began bringing in sponsors who offered a variety of snacks, from French fries to cheese. And that cheese line was always one of the longest of the night. This year, there are two new ways to get fed, and they are far better than anything the festival has previously offered:

1) Buffalo Wild Wings came on as a major new sponsor of GABF this year, and although the Arby's-owned chain is known more for its collection of domestic standards, it has recently begun a new effort to incorporate local craft options at its locations across the country. As such, it has teamed up with New Belgium, Dogfish Head and Sierra Nevada to brew a beer, which will be served in the 3,600-square-foot "sports bar" inside GABF. In addition to nightly presentations and other activities — like watching some games on huge TV screens — Buffalo Wild Wings will be serving up wing and beer samples.

2) For the first time, the festival will include five food trucks that will be parked inside the convention center. This is an idea that could have come five years ago — but better late than never. The local trucks will offer a variety of food, and I'm guessing they will be slammed, so prepare to wait. The trucks are: Dude Bro Taco, with tacos and burgers; Meatball, with meatball subs and Italian cheesesteaks; Mile High Cajun, serving Louisiana-style specialties; Smokestack 70, with its Kansas City barbecue; and Teal Taco, more tacos. 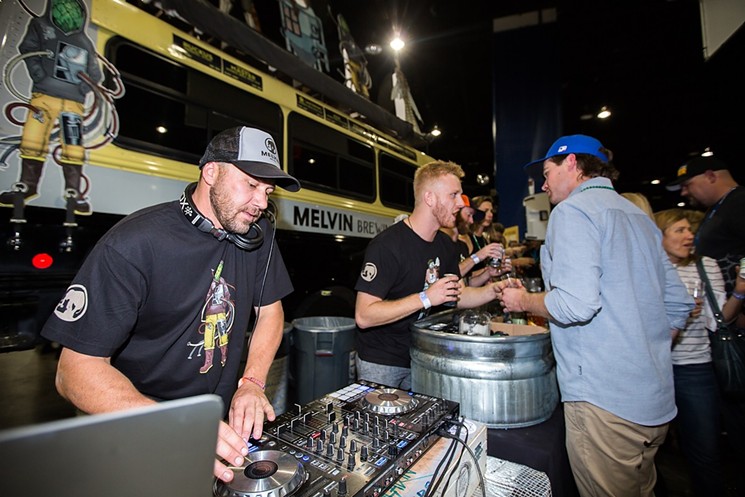 Breckenridge Brewery won't be at GABF this year.
Danielle Lirette for Westword
What to drink
The booths at GABF will be organized in alphabetical order this year rather than by region. Some people don't like this, but I love it because it makes it very easy to find booths and to find people. While I love serendipity and the thrill of discovering new breweries, I also have a list of new or newish breweries in other states that I've heard things about, from friends, from beer publications or from sampling them myself. So, in alphabetical order, of course, here are twelve newish breweries that I plan to hit this year at the fest:

Of course, I have many old favorites as well. Here are six of them: 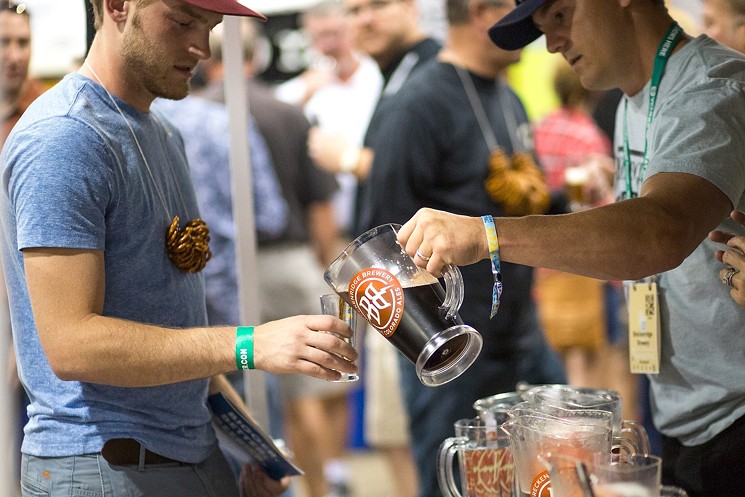 Westword file photo
What to Look For
1) There is not a Fresh Hop category this year, unfortunately. Festival organizers felt that since the fest was earlier than usual, there wouldn't be time to get these seasonal treats into the staging area.

2) There will, however, be plenty of hops. The Brewers Association added three new categories for Juicy/Hazy pale ales and IPAs in 2018, and it's a good bet that this style — which has become insanely popular over the past two years — will dominate many of the tables. But how will they taste? Concerns have been raised that these beers, which are meant to be consumed fresh, may have been sitting for too long at both the judges' table, where they'll find some salty judges, and at the booths, where they will be poured to the masses.

3) CBD and hemp beers are becoming increasingly popular and mainstream in the United States, but CBD beers with alcohol are still illegal. Will there be any of these controversial brews on hand?

4) Denver Broncos offensive lineman Jared Veldheer also happens to be an award-winning homebrewer. As a result, he teamed up with Great Divide Brewing last month to cook up one of his recipes, Demon Horse #66 Pale Ale, which will be entered into the Pro-Am category at GABF. The beer is now on tap at Great Divide, but you can also find it at the festival in the Pro-Am section, where Veldheer himself will be pouring on Thursday.

5) To celebrate "the collaborative spirit of the craft brewing community," the BA added a new competition this year dedicated to collaboration beers. Since these entries don't adhere to any particular style, however, they will be judged in a best-of-show format in which each beer will be evaluated on its own merits, similar to the Pro-Am. The competition was capped at a conservative 48 entries in order to be mindful of judging and competition resources. But the BA will reassess the cap after the competition.

6) More space, more people, more breweries. The BA added 100,000 square feet for 2018 and upped the number of available tickets to 62,000. Although that meant that the fest didn't sell out its Thursday night session, it will provide for a little extra room. In addition, a new 12,600-square-foot “beer garden” will feature limited-edition barrel-aged beers from seventeen breweries that have been a part of Jameson Irish Whiskey’s Caskmates program, an exchange arrangement in which brewers visit the distillery, located in County Cork, Ireland, and then age their own beer in used Jameson barrels.

7) Big Beer is out. While Ballast Point, Coors and AB InBev will all be represented in some form, Big Beer's presence at GABF took a major dive two years ago when the BA implemented new rules that don't allow them to participate in nearly the same way because they don't fit the organization's definition of craft beer. That means you won't find beers from some of the biggest craft names from previous years. Founders, Breckenridge, Lagunitas, Elysian, Four Peaks, Goose Island and Golden Road will all sit this one out. Interestingly, two other big names, Boulevard and Flying Dog, are also missing from the list of breweries pouring beer at the festival.

8) Canarchy is in. Although Canarchy, the parent company for Oskar Blues, Cigar City and five other breweries, is also a syndicate now, it is still considered to be a craft brewer. As such, each of its breweries will have a table at the fest — and they will all be lined up next to one another. Rather than hiding the fact that all seven breweries (Wasatch, Squatters, Perrin, Deep Ellum and Three Weavers make up the other five) are owned by the same organization, Canarchy appears to be celebrating and publicizing that fact. An interesting tactic.

9) Once again, the festival will be heavily lopsided toward Colorado, California, the Pacific Northwest, and a few other big states. New England, which barely turned out for last year's GABF, pulled the same thing this year, while Alabama, Alaska, Arkansas, Hawaii, Iowa and West Virginia are represented by a total of ten breweries among them. Mississippi and North Dakota have no breweries present at all.

10) Charlie Papazian is the founder of the both GABF and the Brewers Association. He almost single-handedly created the homebrewing industry in this country, and in January, he will move on from the BA to start on some new projects. So this GABF will be his last as a leader at the organization. You might catch him to thank him at some point during the festival, or you can find him on Friday in the CraftBeer.com pavilion at 7:30 p.m. where he will give the presentation, "What I Brew, How and Why."
KEEP WESTWORD FREE... Since we started Westword, it has been defined as the free, independent voice of Denver, and we'd like to keep it that way. With local media under siege, it's more important than ever for us to rally support behind funding our local journalism. You can help by participating in our "I Support" program, allowing us to keep offering readers access to our incisive coverage of local news, food and culture with no paywalls.
Make a one-time donation today for as little as $1.