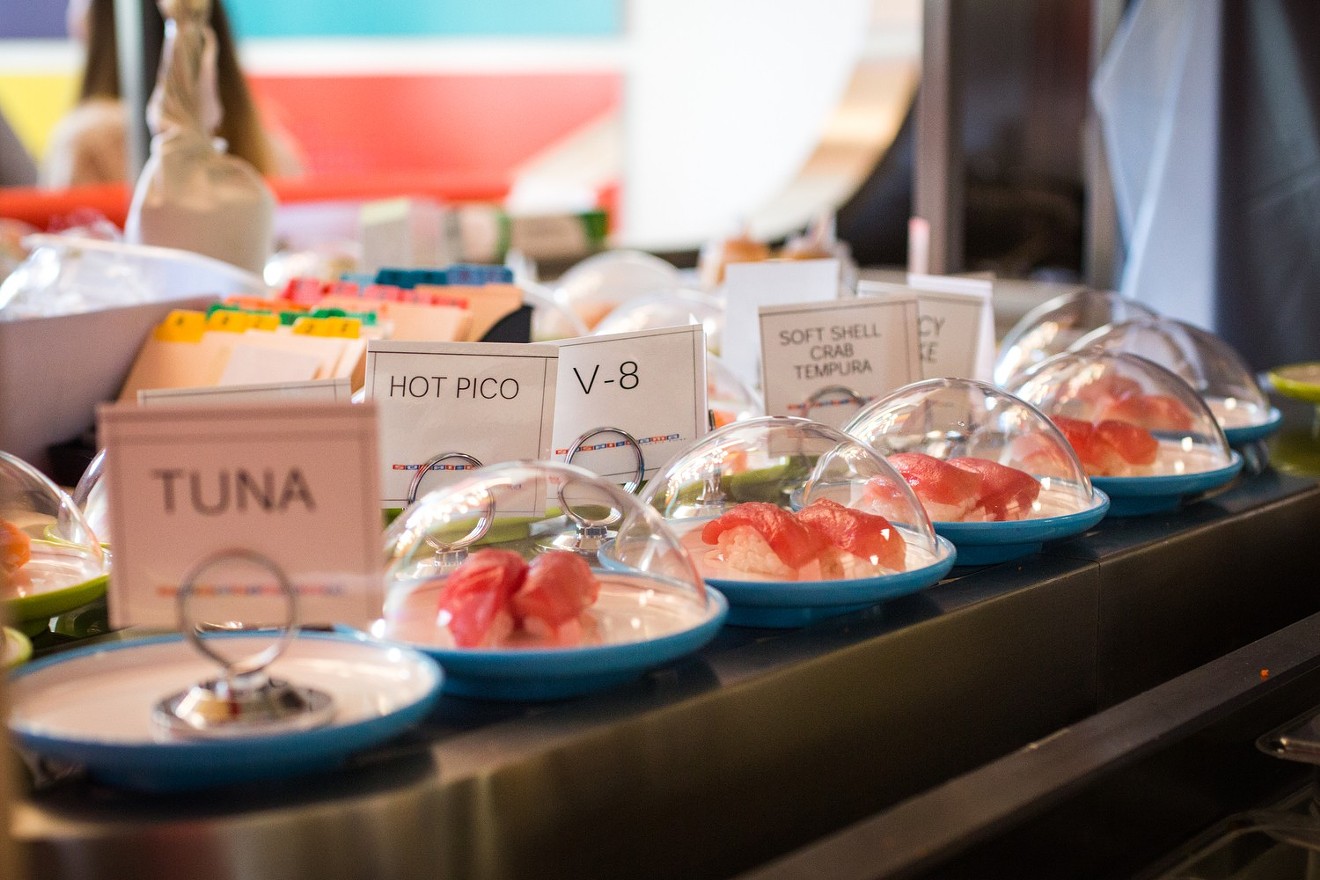 The conveyor belt is running once again at Sushi-Rama. Danielle Lirette
While most restaurants that had been closed to in-house dining because of COVID restrictions chose to reopen on or shortly after May 27, when the executive order from Governor Jared Polis was lifted, some remained closed. Among those were the four locations of Sushi-Rama, chef/restaurateur Jeff Osaka's conveyor-belt sushi bar.

But the original Sushi-Rama, at 2615 Larimer Street, has finally revved up the conveyor belt and is now open from noon to 8 p.m. daily (and until 9 p.m. on Friday and Saturday). There will be limited seating at the moving sushi bar inside the restaurant as well as on the mezzanine level above the main dining room, and covered outdoor seating has been added in the parking lot between the restaurant and the Denver Central Market next door, so you can enjoy fresh seafood at a picnic table painted by one of several Denver mural artists. Weekday happy hour offers a 25 percent discount on sushi from the conveyor belt as well a few select drinks.

Osaka says delivery from ChowNow will be added in the next few days, and then he and his Sushi-Rama team will focus on reopening the other sushi bars, at 4960 South Newport Street, 10012 Common Street in Lone Tree, and 13650 East Colfax Avenue in Aurora. Osaka also runs Osaka Ramen in RiNo and the Empire Lounge & Restaurant in Louisville, both of which reopened earlier this summer. But the chef's upscale eatery, [email protected], closed permanently in Congress Park after four years as one of the top restaurants in Denver. 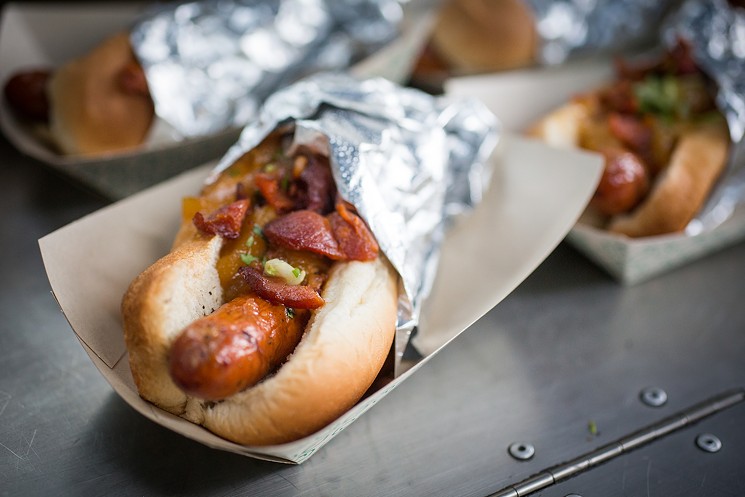 Grab a dog from the Biker Jim's cart on the Auraria campus.
Danielle Lirette
The familiar Biker Jim's Gourmet Dogs carts took some time off, too, as founder Jim Pittenger realized that selling hot dogs would be tough with no customers around. But he started rolling out the carts earlier this summer to meet the demand — and the legal requirements — of taprooms that needed a food presence in order to stay open for drinkers.

Now, after five months away, Biker Jim's cart has returned to the Auraria campus. Back in February and early March, sales to students and teachers were going so well that Pittenger was planning on putting a second cart on campus. But since mid-March, Auraria had been all but a ghost town.

With school back in session, however, students need lunch, and Biker Jim's is there with the dogs every Monday through Thursday...for now. "Nobody knows what's going on with schools," Pittenger notes. "They could shut down again in two weeks." As it is, he adds, the campus will only be about 20 percent full, so lunchtime traffic will certainly be reduced.

Meanwhile, back at hot dog headquarters, business at the brick-and-mortar Biker Jim's at 2148 Larimer Street is slower than in past summers because the Colorado Rockies are playing without fans at nearby Coors Field, last call at Ballpark and RiNo neighborhood bars has been set at 10 p.m. since July 23, and "a lot of people are still a little scared of going out," the hot dog slinger points out.

The good news is that national TV producers are still paying visits to Denver on the strength of Biker Jim's wieners, and Pittenger says that the hot dog joint will soon be making another food show appearance — which is always a good thing for sales.

Wynkoop Brewing Co., at 1634 18th Street, had been open for the past two months but has temporarily closed its dining room. The restaurant didn't specify a reason for the closing, and its menu will be unavailable until the dining room reopens, but the good news is that its beers are still being brewed and served at Wynkoop's new chicken pop-up, The Coop, which operates out of the brewpub's Mercantile Room. You can load up on rotisserie or fried chicken and a wide range of beers, including this year's release of the notorious Rocky Mountain Oyster Stout (made with real bull's balls), at the Mercantile Room or on the Wynkoop's expanded patio from 11 a.m. to 8 p.m. daily.
KEEP WESTWORD FREE... Since we started Westword, it has been defined as the free, independent voice of Denver, and we'd like to keep it that way. With local media under siege, it's more important than ever for us to rally support behind funding our local journalism. You can help by participating in our "I Support" program, allowing us to keep offering readers access to our incisive coverage of local news, food and culture with no paywalls.
Make a one-time donation today for as little as $1.