Laura Shunk
Colorado's robust distilling industry means there's no shortage of interesting spirits out there with which to stock your bar, but recently, a couple of rather novel flavors have made their way into the market, and they're worth working into your lineup, if only to see what they add to your favorite cocktails. Moreover, one of our local whiskey distilleries recently pulled down a coveted and prestigious award for a special rye that, despite having been just released, will be gone in a blink. For those reasons, we present to you a trio of spirits you should be sampling right now (and in the case of that rye, we really do mean right now). 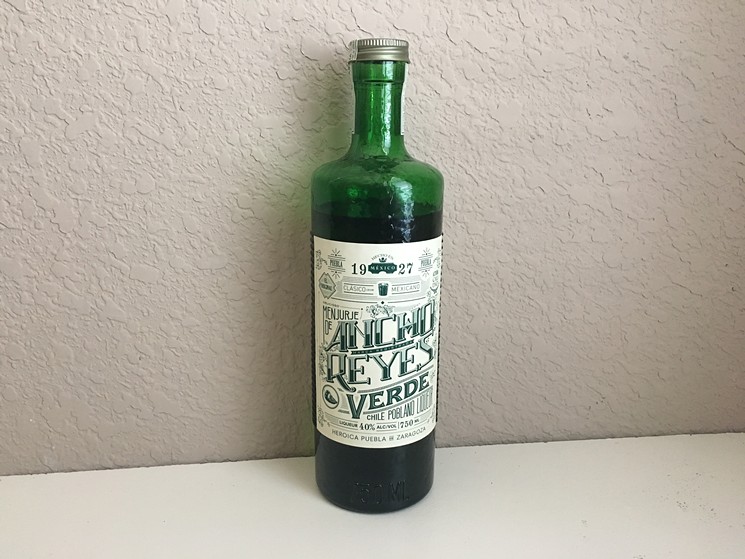 Ancho Reyes Verde, a chile poblano liqueur.
Laura Shunk
Ancho Reyes Verde
When Ancho Reyes ancho chile liqueur hit the market a few years back, it brought back to life an old recipe from Puebla, Mexico, that infused rum with ancho chiles, or sun-dried poblanos. Ancho's first spirit, rust-colored in hue, relied on ancho, guajillo and pasilla chiles to give its fiery flavor; you've likely seen it on cocktail menus around town, tucked into drinks like daiquiris and margaritas as well as winter warmers. But when the Ancho crew decided to make something new, it returned to that poblano chile for inspiration, and decided to just forgo the sun-drying and see what happened. It's just debuted the Ancho Reyes Verde, which starts with a sugarcane base spirit that garners flavor from poblano, guajillo and pasilla chiles. The result is a pour that's more vegetal and crisp than the ancho chile liqueur, which has a more robust and smoky note. Nick Touch, bartender at Williams & Graham and representative of the Bon Vivants, the marketing group promoting the spirit, uses the verde as a base spirit in a daiquiri to show how it performs in cocktails; it gives that drink a nice savory counterpoint to the sweet-tart combo of sugar and lime. The spirit isn't a homegrown product, but with all the green chile fanatics in Colorado, we expect this will be a necessary addition to many a home bar. In addition to Williams & Graham and Occidental, find it behind the bar at Avanti, Los Chingones and the Way Back, or on shelves at Mondo Vino, the Proper Pour, Molly's Spirits and Argonaut.

Nooku bourbon cream, a dairy spirit with no added sugar.
Laura Shunk
Nooku Bourbon Cream
Curt and Nancy Richardson launched Old Elk Distillery late last year, and they brought forth a trio of spirits for the occasion: Dry Town vodka and gin, whose name harks back to Prohibition in Fort Collins, and Nooku bourbon cream, named for a Native American word for the snowshoe rabbit. Nooku is in a category of its own; it's a dairy-based libation made with just two ingredients: cream and bourbon. Old Elk makes the bourbon first, and after a minimum of two years of barrel aging, the distillery blends it with cream, resulting in a quaff that drinks a bit like a bourbon milkshake. It has a decadent and voluptuous texture, with distinct caramel and toffee notes from the bourbon and a surprisingly crisp finish. Nooku is a good one for drinkers who like to end their night with a pour of Bailey's, but it's also a worthwhile dram for people who find Bailey's too sweet; because it has no added sugar, Nooku is decidedly a spirit, not a dessert. We hear it also makes for one hell of a variation on Irish coffee. Pick it up at Argonaut, Bonnie Brae Wine & Liquor, Colorado Liquor Mart or Hampden Plaza Liquors & Wine, or pop into the Way Back, Stella’s on 16th, Blake Street Vault, Board Game Republic or Hayter’s & Co for a taste.

A.D. Laws Secale Straight Rye Bottled in Bond, the first bottled in bond rye made in Colorado.
Laura Shunk
A.D. Laws Secale Straight Rye Bottled in Bond
If you keep your eye on whiskey news, you likely already know that the Bottled in Bond Secale Rye won the distinction of best rye in the world at this year's World Whiskies Awards. But beyond that designation, there are several reasons to recommend hightailing it to the distillery to pick up a bottle before they're gone. The bottled in bond rye and its sibling, bottled in bond bourbon, are the first two bottled in bond spirits made in the state of Colorado, a designation that comes with several rules attached. To be labeled bottled in bond, a whiskey must be distilled in one season using the grain of a single season, under one distiller, at one distillery, and then aged in a federally bonded warehouse for at least four years and bottled at 100 proof. Think of it a bit like a single-malt Scotch, single-barrel whiskey, or, if you're a wine person, a single-vineyard wine. At Laws, the special treatment created something exceptional: a rye that's uniquely smooth, even as its characteristic spicy notes shine through. Like the standard Secale, it's built on heirloom rye from the Cody family farm in the San Luis Valley, and distilled with El Dorado spring water out of Boulder. You can add a little water to open it up, but this is a spirit best sipped neat. If you want to try it, you'll need to do it quickly: Secale (pronounced seh-kah-lay) is nearly sold out. Head to the distillery, 1420 Acoma Street, for a bottle, or pop by Finn's Manor, Hearth & Dram, Acorn, Highland Tap & Burger or Poka Lola Social Club for a taste. By the way, it's worth watching the Laws Whiskey House Facebook page for upcoming release news — the distillery will soon bottle a straight corn whiskey, for instance, and they'll announce it there first.