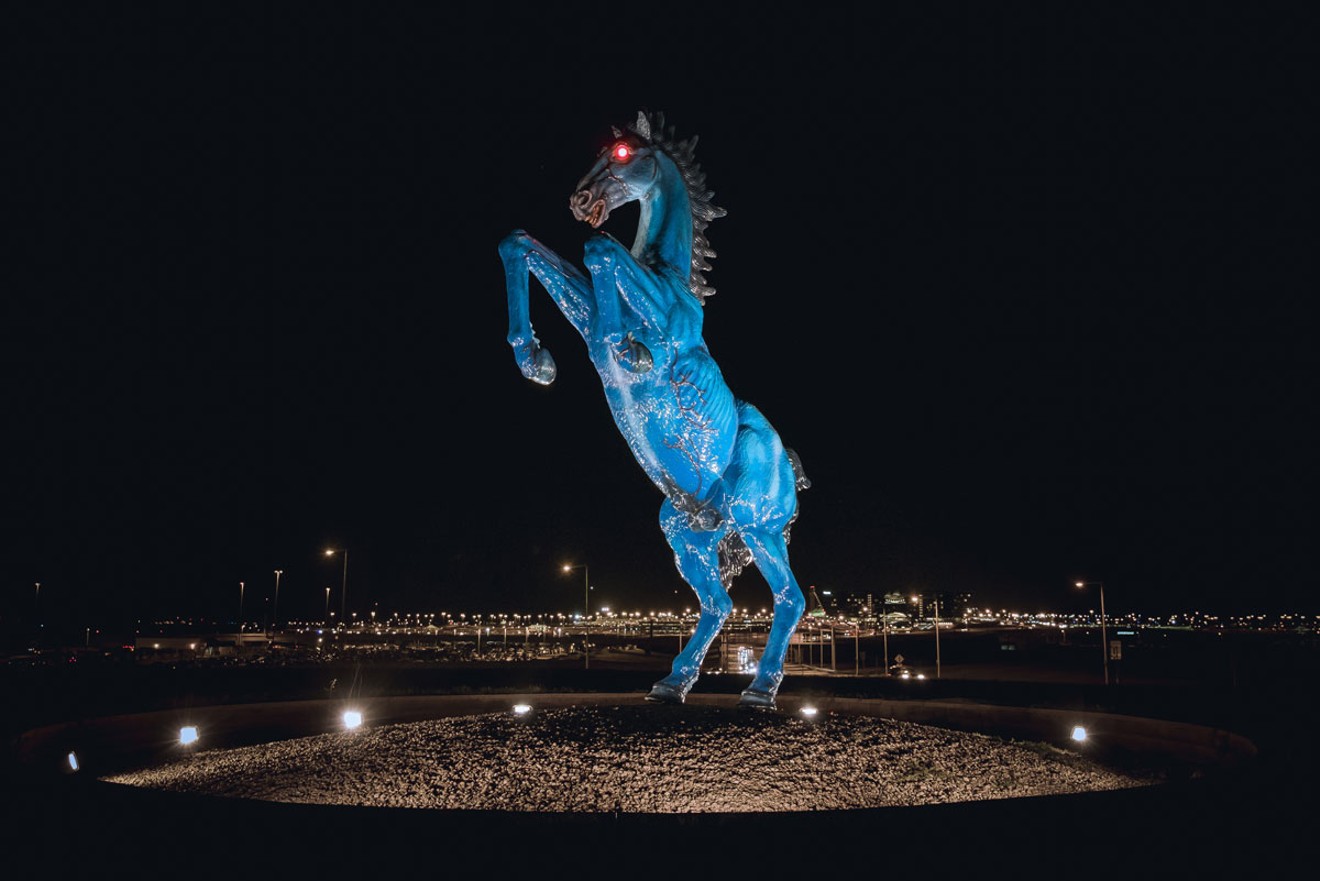 "Mustang" is a real eyeful tower out by Denver International Airport. Marvin Anani
Denver is not much of a town for monumental sculpture. While you can pretty much read this city’s entire history through its buildings, decade by decade, you can’t do the same through its art; there are too many gaps in the timeline. Here’s how it went: In the 1910s and 1920s, an effort was made to adorn Denver with art, but that essentially was put on hold until the 1960s — and even that modest burst in interest faltered soon after, disappearing entirely during the oil bust.

Then in 1988, Mayor Federico Peña issued an executive order creating a program to fund and collect public art in Denver. His successor, Wellington Webb, made it official, establishing the Mayor’s Office of Art, Culture and Film (now Denver Arts & Venues) and requiring a 1 percent set-aside for public art on all city-funded construction projects costing $1 million or more. In 1994, RTD got into the act with its Art-n-Transit program, which commissions artwork to embellish bus and rail stations. The State of Colorado and the federal government also funded art acquisitions. And, of course, from the founding of this city, many private donors have contributed to the cause of art in very public places.

In most cases, those private efforts have resulted in far better pieces. Almost invariably, the works selected through the public process are disappointing to dismal, since selection juries are dominated by those with the political connections needed to be appointed, but lacking the art expertise necessary to make good choices. There are a few happy exceptions, though, including the three publicly funded pieces that made this list of the best outdoor sculptures in Denver.

Still, while the quantity of public sculpture in this city may be lacking, there’s no shortage of quality — at least, not in these top ten examples, presented in chronological order. 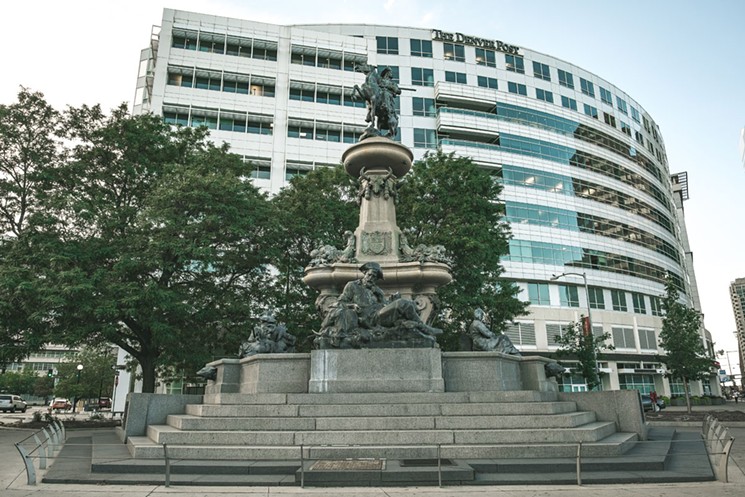 Shortly after the turn of the last century, Mayor Robert Speer was interested in the beautification of Denver, and one of the things he wanted to do was establish a civic center in the form of a park around which public buildings could be constructed, located somewhere west of the Colorado State Capitol. MacMonnies was among those who submitted a proposal for the project; his plan called for a park that would run from the front steps of the Capitol toward downtown, ending at the Arapahoe County Courthouse, which stood at Court Place and 15th Street; midway between these two structures would be his fountain, surrounded by a park.

MacMonnies did not get the job of designing Civic Center Park — Charles Mulford Robinson did — and his plan didn’t get built, either, but that’s another story. And while MacMonnies did get a commission to create a fountain, without his plan it wound up in a rather oddball location at Broadway and Colfax. Not only that, but public pressure during the design phase forced him to change the principal figure he’d wanted to place at the top of the fountain. MacMonnies’s original model was surmounted by an Indian on horseback — but in the fountain as realized, it’s a figure of Kit Carson astride his horse and holding his rifle in one arm, using the other to point to the mountains.

Talk about your Western Americana! 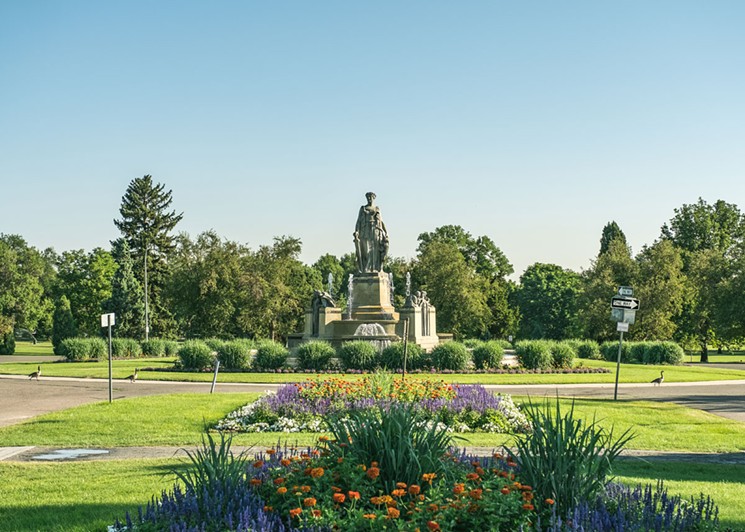 “Thatcher Memorial Fountain,” by Lorado Taft.
Marvin Anani
“Thatcher Memorial Fountain”
Lorado Taft, 1918
City Park Esplanade off East 17th Avenue
The “Thatcher Memorial Fountain” lacks the theatricality of the “Pioneer Fountain” and has no Wild West allusions at all. Then again, Joseph Addison Thatcher, the man who commissioned the sculpture, was a wealthy, successful banker, not a romantic frontier figure. And he spared no expense when choosing the sculptor: Lorado Taft, a Chicago-based, Paris-trained artist in the top ranks of his day. Taft wasn’t just noteworthy for his talent; early on, he’d encouraged women to become sculptors. Back in 1892, architect Daniel Burnham had become concerned that Taft would not be able to complete sculptures commissioned for the World’s Columbian Exposition in Chicago in time for its opening in 1893. Taft responded that he could meet the deadline if his female assistants helped with the task — a fairly outrageous request in those days — and Burnham was persuaded to take a step toward gender equality, if only because of the urgency of the project.

At the top of the “Thatcher Memorial Fountain” he created 25 years later, Taft placed the personification of Colorado: an older woman in robes. The base of the fountain is divided into three parts, representing “Loyalty,” “Love” and “Learning”; each part features three figures. The central figures in these groups are depicted in full length, with those on either side conveyed as three-quarter busts, creating three T- shaped compositions enhanced by the horizontal, decorative banding that runs below. This banding also appears on the main pedestal on which the Colorado figure stands, where it is punctuated by shield medallions. Though the figures on the fountain are rendered traditionally, there’s definitely a proto-modernist quality to the overall design. With those T shapes and that banding, it looks like an exemplar of nothing other than the Viennese Secession — right here in the Mile High City. 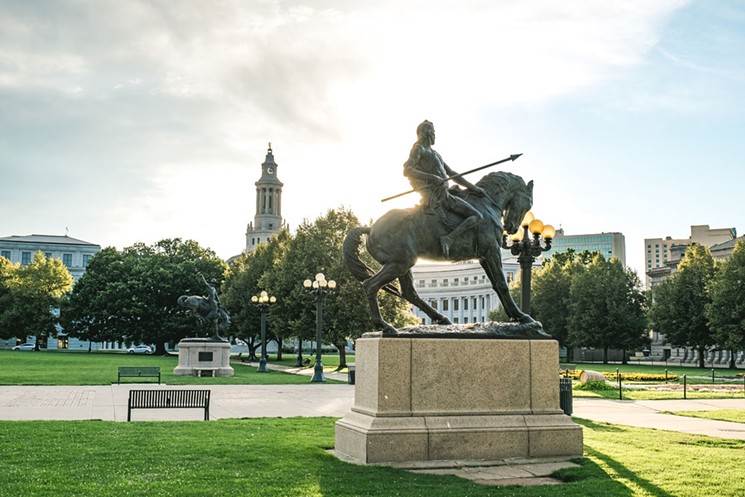 The artist who created both of these sculptures, Alexander Phimister Proctor, was born in Canada, grew up in Denver, then enjoyed a successful career that took him to New York, Paris and back to New York before he finally settled in Oregon, where these pieces were made. Proctor was renowned for his depictions of animals, and the horses here — one bucking, one striding — are exquisitely done. The human figures are well done, too, and come with interesting back stories. “Slim” Bill Ridings, the model for the cowboy in 1920’s “Bronco Buster” — originally “Broncho Buster,” reflecting the preferred spelling at the time — was arrested for horse theft while Proctor was working on the piece, and the artist paid his bail so that the sculpture could be finished. And while “On the War Trail” was created only a decade after “Pioneer Fountain,” the public conception of Native Americans had changed notably by 1922. Instead of representing Denver’s original inhabitants as some kind of enemy, the passage of time had transformed the popular view of the Indian into nothing less than a romantic hero — just like the cowboy.

Unlike the earlier realist pieces by MacMonnies and Taft, these sculptures by Proctor are more impressionistic, their details smoothed over without losing any sense of their being realistic. Like “Pioneer Fountain,” though, they help to identify Denver as a Western city. 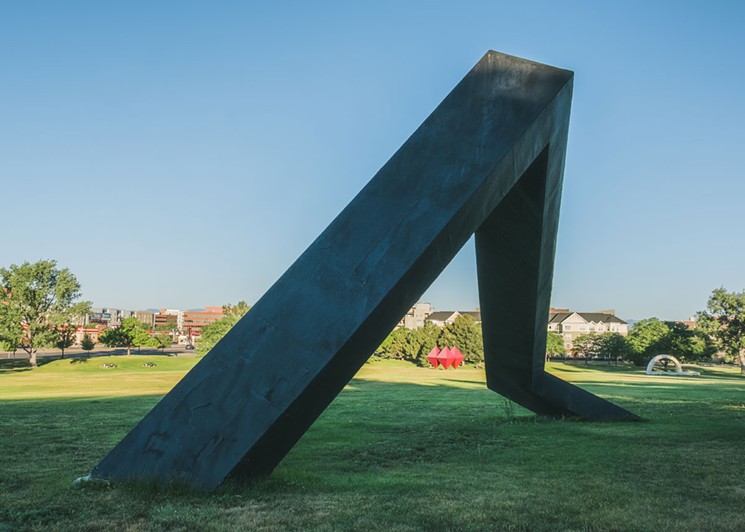 Anthony Magar sculpture, Burns Park Sculpture Garden.
Marvin Anani
Burns Park Sculpture Garden
Various artists, 1968
Between Colorado Boulevard, Alameda Avenue and Leetsdale Drive
Though a few mid-sized sculptures appeared in Denver from the 1930s through the mid-1960s, none had the monumentality of earlier pieces. This changed in 1968, though, when a motley band of mostly regional artists erected a set of gigantic, minimalist plywood sculptures on a weed-strewn triangle of land at the west end of Hilltop, right off Colorado Boulevard.

It all started with a Thanksgiving-night visit to the home of University of Denver art professor Bev Rosen and her husband, Bernie Rosen, by Denver sculptors Roger Kotoske and Wilbert Verhelst. Kotoske complained that there was no place in town to exhibit sculpture, and Bev came up with the idea of a sculpture garden — a new concept for anywhere at the time, let alone in the sculpture desert that was Denver. Bernie used his influence to secure the land (not yet dubbed “Burns Park”) for the first and only Denver Sculpture Symposium in the summer of 1968. At that time, nine pieces were erected; in addition to works by Kotoske and Verhelst, there were sculptures by Anthony Magar, Dean Fleming, Peter Forakis, Robert Morris, Robert Mangold, Richard Van Buren and Angelo Di Benedetto. The sculptures were only meant to be up for that summer, a condition that Bernie agreed to in exchange for the use of the land.

While three sculptures were indeed removed at the end of that summer and two more were destroyed over the years, the Burns Park Sculpture Garden remains. The original Kotoske, Verhelst, Magar and Di Benedetto are still there, and two more pieces have been added: another Magar created at the time of the symposium, and a much later Barbara Baer. Aside from the too-new Baer, together these sculptures present a snapshot of the most advanced aesthetic currents of the 1960s. 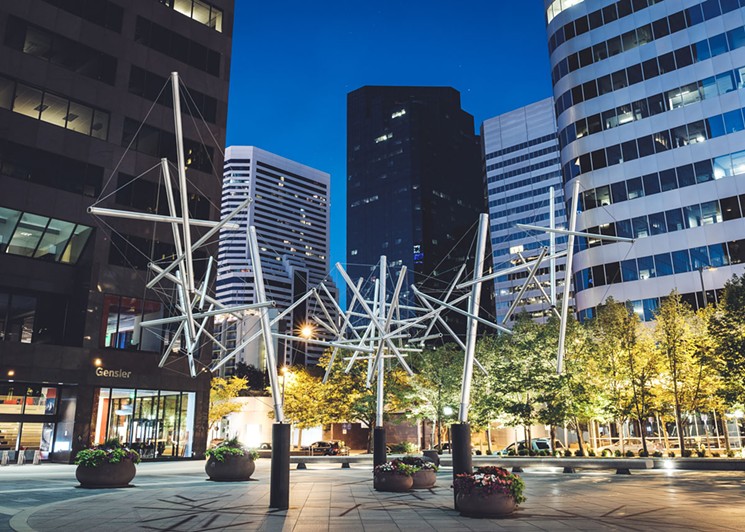 “Soft Landing," by Kenneth Snelson.
Marvin Anani
“Soft Landing”
Kenneth Snelson, 1982
17th Street Plaza, 1225 17th Street
The face of Denver changed in the 1970s and ’80s, when some of the most important architects in the world — Gio Ponti, Minoru Yamasaki, Skidmore Owings Merrill (SOM), Kohn Pedersen Fox (KPF) and Phillip Johnson among them — created buildings downtown. This glorious era ended ignobly with the oil bust of the ’80s and, sad to say, the aesthetic and stylistic quality of Denver’s architecture has never recovered, with the exception of a stray notable building rising up here or there. Though some monumental sculptures accompanied these glamorous high-rises, most have been removed, including the monumental Harry Bertoia “Untitled (Sonambient)” that once stood in front of Yamasaki’s former Colorado National Bank tower. That makes the fabulous “Soft Landing,” one of Kenneth Snelson’s most significant commissions, a rare survivor from a list that was short to begin with.

Snelson’s oeuvre was dominated by his interest in manipulating the properties of physics and the concepts of three-dimensional mathematics to create his nominally minimalist pieces. As a summer student at Black Mountain College in the late 1940s, he’d become enamored with the contraction of engineering and aesthetics in the work of Buckminster Fuller; he went on to build models for the vanguard engineer and theoretician and they developed a close relationship, though they later had a falling out. Snelson’s breakthrough commission was for a gigantic suspension piece at the New York World’s Fair of 1964 and 1965.

Though Snelson created a range of forms, “Soft Landing” is one of his signature pieces, in which hollow tubes and steel cables are used to express an elaborate shape suspended in the air, an effect the artist called “floating compression.” And looking at this piece in Denver, you can definitely see what he meant.