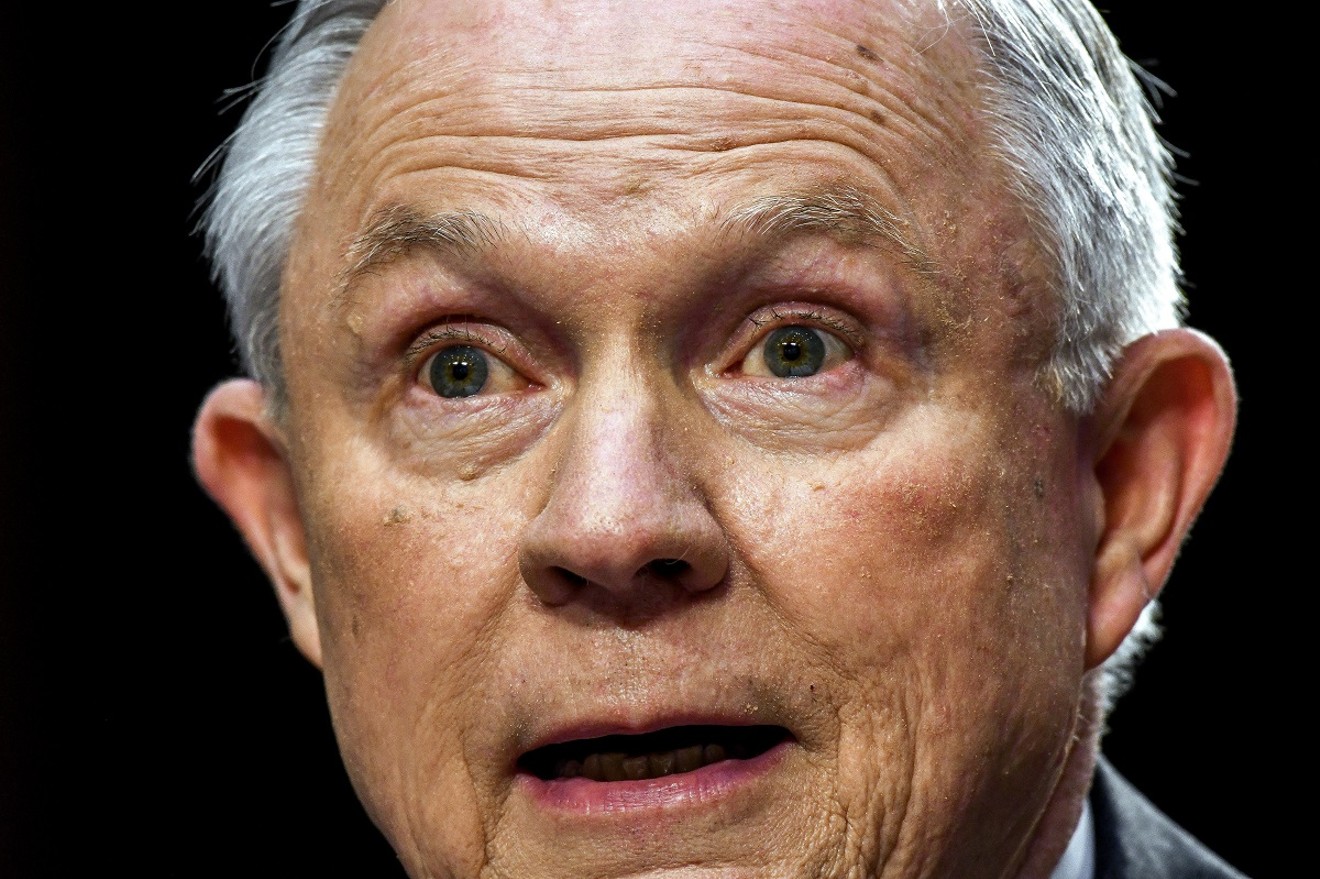 We're watching you closer than ever, Jeffy. Shutterstock.com/mark reinstein
Update: AG Jeff Sessions has indeed rescinded the Cole Memorandum. Keep reading for his directive, our original story, and responses from Colorado's congressional delegation.

Posted at 8:20 a.m. January 4: United States Attorney General Jeff Sessions is expected to rescind Obama-era legal cannabis protections today, January 4, according to a story by the Associated Press. Citing two anonymous sources close to the decision, the AP reports that Sessions will put an end to the Cole Memorandum, guidelines released by the Department of Justice in 2013 that were designed to give federal prosecutors clarity on how to operate in states that have legalized retail marijuana.

Once the Cole memo is obsolete, Sessions would allow federal prosecutors in Colorado and other states that have legalized pot to decide how to enforce federal cannabis laws, according to the AP report. Written by then- deputy Attorney General James Cole, the memo intended to clear up confusion about how or even if federal government agencies could discipline state-legalized cannabis businesses and users as more states began allowing them.

The move comes right on the heels of California's first days of legal retail cannabis sales, which began on Monday, January 1. California was the sixth state to begin retail pot sales, with Massachusetts expected to get in the game later in 2018. Some form of medical marijuana is legal in 29 states, as well as Guam, Puerto Rico and Washington, D.C. Although California was the first state to legalize medical marijuana, Colorado was the first state to allow legal retail sales, which began on January 1, 2014, the year after the Cole memo was released.

Sessions has been vocal about his concerns with the Cole memo and other federal cannabis protections. In June, MassRoots reporter Tom Angell published a letter that Sessions had sent to congressional leaders, asking them to undo the Rohrabacher-Farr amendment, which grants federal protections for medical marijuana. In July, he sent letters to governors John Hickenlooper (Colorado), Bill Walker (Alaska), Kate Brown (Oregon) and Jay Inslee (Washington), questioning the power of the Cole memo and reiterating that the Department of Justice's authority to enforce federal law in states that have legalized marijuana remains unaltered.

In the letters, Sessions cited rising out-of-state diversion of marijuana, youth use, emergency-room visits and traffic deaths related to marijuana as cause for "serious questions." The stats he used to support his reasoning, however, were from the Rocky Mountain High Intensity Drug Trafficking Area Report, a report that has drawn criticism for its data-collecting and presentation methods.

During a press conference on November 29, Sessions told reporters that the the DOJ is looking at ways to increase federal enforcement against cannabis use, which he called "detrimental" to the country.

Senator Cory Gardner was the first of Colorado's elected officials in D.C. to respond to the AP story. “Reports that the Justice Department will rescind their current policy on legal marijuana enforcement are extremely alarming," the Republican said in a statement. "Before I voted to confirm Attorney General Sessions, he assured me that marijuana would not be a priority for this administration. Today’s action directly contradicts what I was told, and I am prepared to take all steps necessary, including holding DOJ nominees, until the Attorney General lives up to the commitment he made to me prior to his confirmation. In 2016, President Trump said marijuana legalization should be left up to the states, and I agree.”


“It is absurd that Attorney General Sessions has broken Trump’s campaign promise and is now waging war on legal marijuana and states’ rights."

Noting that the Cole memo had stated that the federal government must prioritize investigating and stopping the illegal drug trade and associated crimes, rather than expending resources on highly regulated industries, such as marijuana in Colorado, Representative Jared Polis offered this response:

“It is absurd that Attorney General Sessions has broken Trump’s campaign promise and is now waging war on legal marijuana and states’ rights," the Democrat, who launched the bipartisan Cannabis Caucus in 2017 and is currently running for governor, said in a statement. "The growing Colorado economy is in jeopardy with the news that the attorney general will now go after states that have decided to regulate marijuana. The Trump administration needs to back off and allow marijuana to be treated like alcohol under the law. At stake is a growing industry that has created 23,000 jobs and generated $200 million in tax revenue in Colorado. I’m calling on President Trump to overrule Attorney General Sessions and protect consumers, our economy, the will of the voters, and states’ rights."

Senator Michael Bennet also criticized the move, believing it will create  tension in Colorado. "In rescinding the Cole memo, the Attorney General failed to listen to Colorado, and will create unnecessary chaos and confusion," he wrote on his Twitter account.

Representative Mike Coffman, too, issued a response: "Attorney General Sessions needs to read the Commerce Clause found in Article 1, Section 8 , Clause 3 of the U.S. Constitution that limits the power of the federal government to regulate interstate and not intrastate commerce. The decision that was made to legalize marijuana in Colorado was made by the voters of Colorado and only applies within the boundaries of our state. Colorado had every right to legalize marijuana, and I will do everything I can to protect that right against the power of an overreaching federal government."

Congresswoman Diana DeGette has weighed in. “This step could drag us back to the days of raids on legal dispensaries and people living in fear of being jailed for using the medical marijuana they need,” she said. “It could create a chilling effect on an industry that employs thousands of people in Colorado alone, where sales now top $1 billion per year. The federal government shouldn’t take punitive steps that undermine the will of our citizens expressed at the state level.”

And then there's this from Representative Ed Perlmutter: “Today’s decision by Attorney General Sessions rolls back the progress we’ve made to balance the laws of Colorado with the priorities of federal law enforcement. The Cole memo provided assurances to states like Colorado with marijuana use and a strict regulatory structure in place by allowing these states to proceed according to the will of their voters. While it did not relieve all uncertainty, especially for financial institutions, it was a step forward. Today’s announcement creates even greater uncertainty in the industry and shows a lack of respect for states’ rights.

“Congress needs to take matters into its own hands. I have been urging Congress to act on this issue since 2013, and I once again call on my colleagues to act immediately, starting with passing my SAFE Banking Act, which allows legitimate marijuana businesses access to banking services. Fixing the banking system will ensure a strong regulated environment for marijuana sales and continue to curtail the black market. We’ve come too far to backtrack on this issue now. It’s time to find a real solution that will keep our communities safe and respect the will of voters in the majority of states in our country.”

Congressman Scott Tipton was also critical of Sessions's decision: “The announcement by the Department of Justice is a drastic departure from the attorney general’s previous commitment to Senator Cory Gardner during the confirmation process that he would uphold the Obama Administration’s treatment of marijuana enforcement and President Trump’s comments that he would leave it to the states. Furthermore, it creates even greater confusion and uncertainty by leaving enforcement decisions up to federal prosecutors. The Department of Justice should provide guidance on enforcement of marijuana for states that have voted to legalize it. The people of Colorado voted to legalize marijuana in the state, and I am committed to defending the will of Coloradans.”

Representative Ken Buck didn't back down from going after his colleagues in Congress. “Coloradans made a clear choice to legalize marijuana, but Congress has failed to bring federal laws into alignment with the will of state voters, leaving us with an outdated approach to federal enforcement. Public safety has and should remain primarily a state function," he said in a statement.