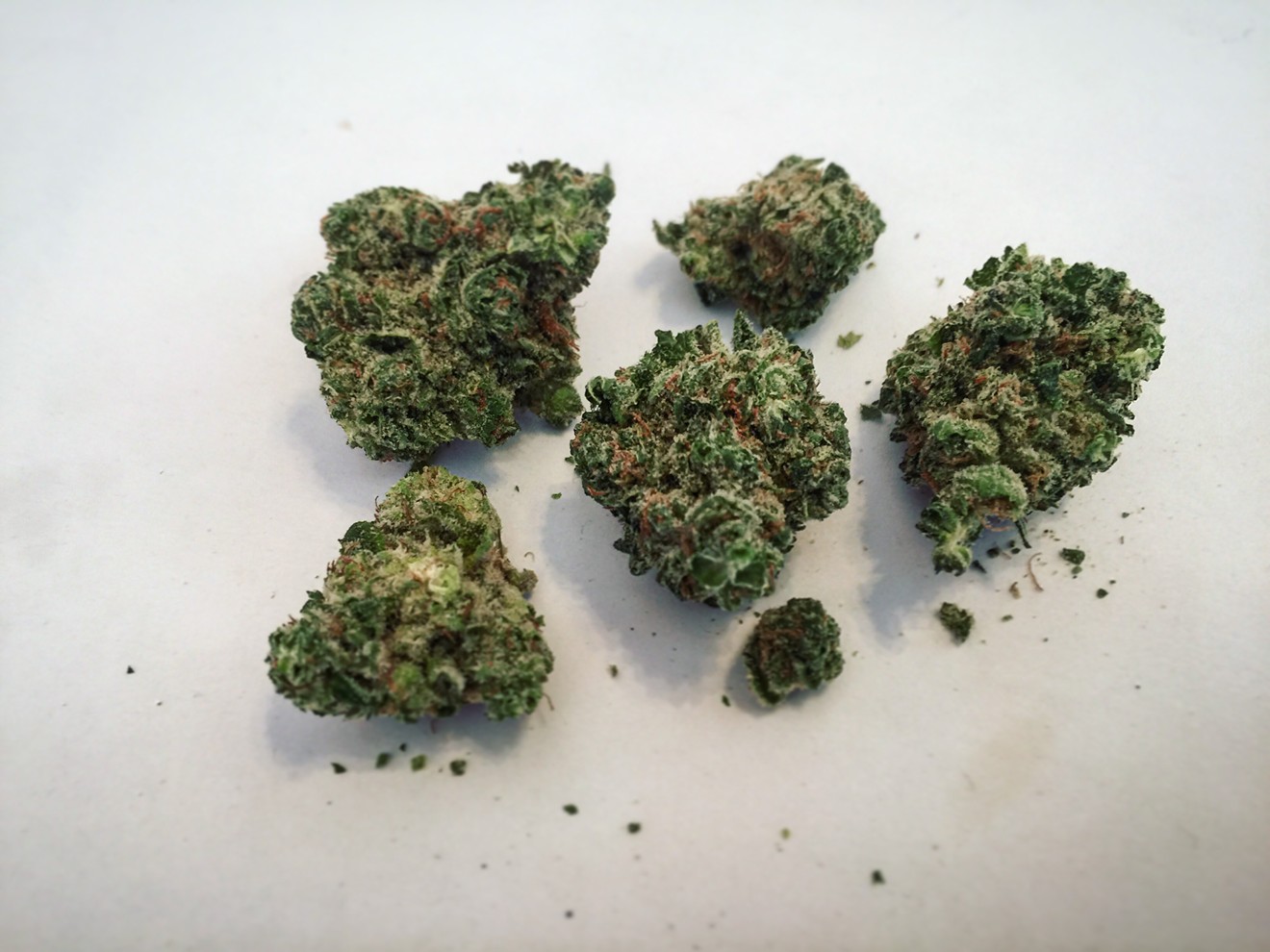 The White stuff: White 99. Herbert Fuego
Marijuana and hip-hop have a long and harmonious relationship, so much so that the names of most hybrid strains sound like rap-song titles. If I told you I was listening to “Girl Scout Cookies” by OG Kush featuring Durban Poison or “The Truth” by SFV OG featuring Chemdawg, you’d probably think nothing of it; it would be weirder if bands weren’t named after stinky weeds. So when I heard about White 99 — from The White and Cinderella 99 — it was like hearing that Andre 3000, Devin the Dude and Snoop Dogg were collaborating again. Who doesn’t want more of that?

Not to be confused with White Widow (another resinous strain), The White is a legendary but oft-overlooked indica-leaning hybrid with a mysterious, unknown origin. Although the strain isn’t sought for its smell or taste, its potency and trichome production are topped by few. Cinderella 99 — a child of Jack Herer — is known for a burst of sweet citrus and pine flavors, but its potency is nothing to scoff at, either, with a THC content regularly testing above 20 percent. Combining the two brings a mind-fucking high that will disable users for hours.

My first encounter with White 99 was like riding in a jalopy-looking Honda Civic that has $20,000 invested under the hood — only I didn’t know that when I signed on for the ride. Its smell was lackluster, with sweet notes of citrus and pine leaking out of the chunky buds when I squeezed them. Smoking a bowl provided little flavor, which made me foolishly think I needed to spark a few more. Big mistake. This sleeper strain had me stuck to the couch on a level I usually only encounter with Bubba Kush or post-Thanksgiving.

White 99 will make you giggle for three hours straight and put you to bed like an Ambien, but you’ll wake up the next day respecting — maybe even fearing — its power. It enables Jay and Silent Bob marathons, trips to the buffet, video-game tournaments and other stereotypical stoner activities. But unless you’re a strain connoisseur, that’s probably exactly what you want.

Looks: Bulbous, chunky buds in oblong shapes — very reminiscent of The White. Expect a light forest-green tone with yellow-orange hairs, which is sometimes hard to notice because of very heavy trichome coverage.

Smell: Although not as bland as The White, White 99’s smell is a subtle mix of citrus, soil and a bittersweet note similar to that of Citra hops. You won’t always pick it up right out of the bottle; it might need a pinch.
Flavor: Hard to notice unless vaporized or smoked out of a joint or clean glass, White 99’s quiet flavor is tart, sweet and earthy — like a lighter-flavored Sour Kush.

Effects: This is where White 99 really shines. Users feel its effects instantly, with an uplifting head high that kills stress and muscle tension. The warm sensations can last for hours (half the day, if your tolerance is low), but motivation dies quickly. This is great for binge-watching TV or movies, or otherwise just spending a night in; it’s also good for anyone with minor to moderate muscle pain.

Commercial grower’s take: “It’s been around for a while, at least five years or so, but it just hasn’t caught on like other super-potent, resin-y strains like Gorilla Glue or White Widow. I think White 99 gets me just as high as the other two — definitely more than White Widow — and neither Gorilla Glue nor White Widow are bursting with flavor...but I digress. The people want what they want. White 99’s yields are extremely average, so that could be why it’s less popular in the industry. It should take eight to nine weeks to flower, but let the trichomes tell you how long to wait before cutting it down. Don’t let the yellow tint to the calyxes fool you into harvesting too early. Make sure those [resin] glands are milky, not clear.”