Denver 4/20 Rally: Ten Things to Know Before You Go 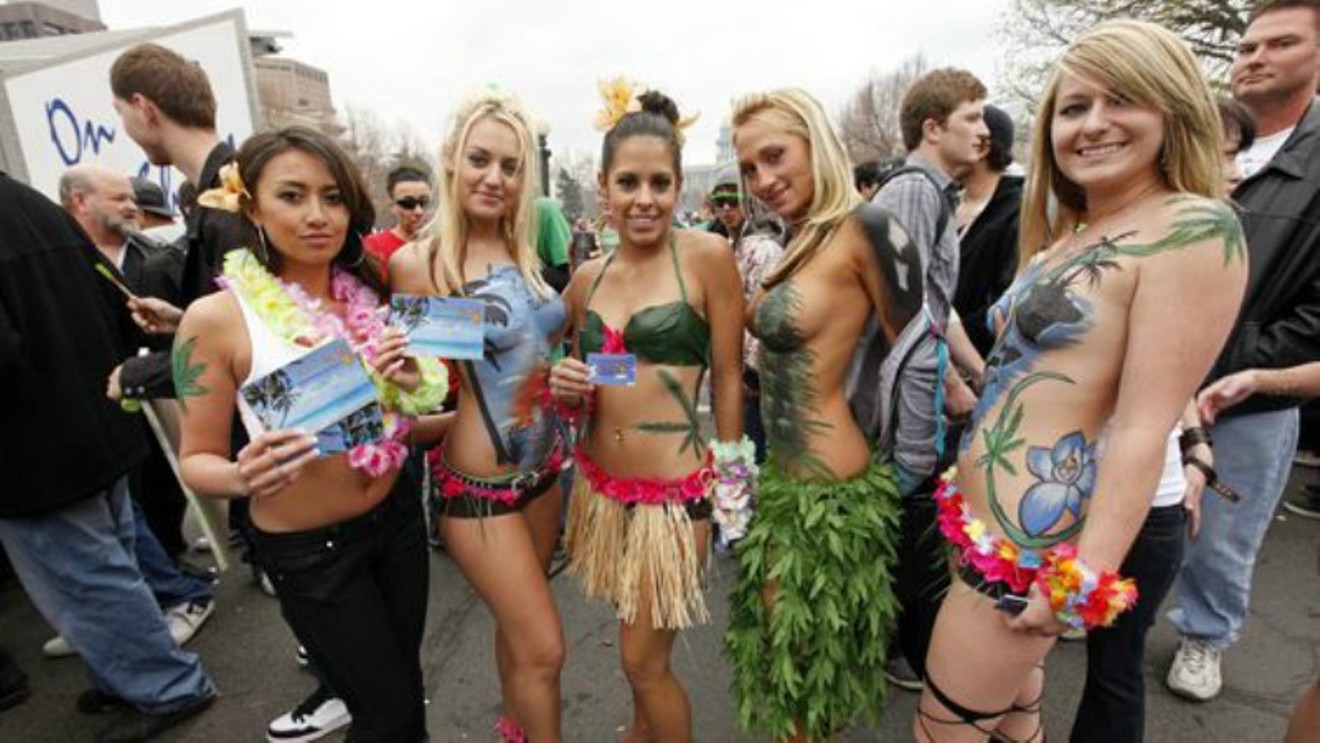 A photo from our slideshow "4/20 in Denver: Part One (NSFW)." Photo by Aaron Thackeray
Tomorrow, April 20, the latest edition of the Denver 4/20 Rally will hit Civic Center Park. The event, which gets under way at 10 a.m., is expected to draw approximately 50,000 people, and there'll be plenty of food and music courtesy of DJs, local hip-hop groups and headliner 2 Chainz, who'll emcee the annual 4:20 p.m. countdown. But what do attendees really need to know? We asked Miguel Lopez, the man behind the bash. Here's his personal Denver 4/20 Rally top ten.

Number 1: It's not just a party

The rally began as a demonstration against restrictive cannabis policies — and while limited sales of recreational marijuana have been legal in Colorado since 2014, Lopez stresses that there's still plenty to protest.

"The definition of the rally is the coming together of people for the common good," he says. "People go to the rally to feel what democracy is like and to practice civil disobedience in front of two oppressive governments — the federal government and the government in Colorado, which has misled the public into believing that marijuana was going to be regulated like alcohol. It's more regulated than alcohol, and it's big business. The marijuana community has contributed a lot to society, but who's benefiting from all that tax revenue? Nobody on the streets...."

Lopez will spend much of 4/20 hanging out at a booth located behind the Greek theater at the park near 14th Avenue and talking to attendees about the roots of the rally. "There are seeds from the ’60s and the ’70s, from the civil-rights movement and the gay-rights movement and the anti-Vietnam War protests," he says. "People would protest and smoke up as a symbol of defiance against the government." 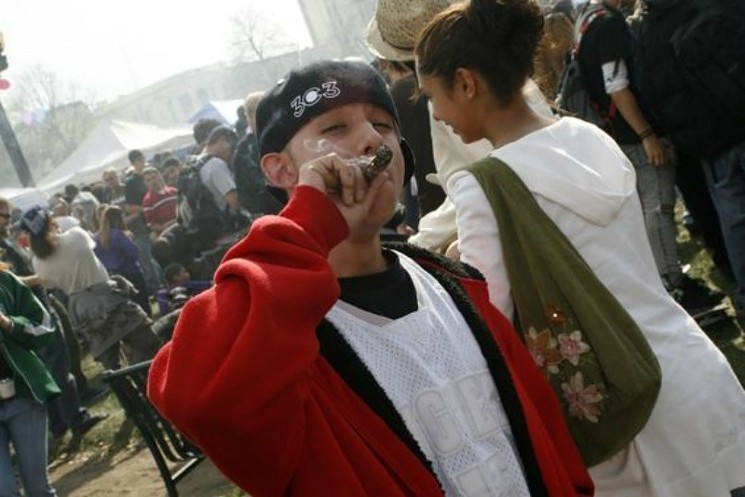 A photo from our slideshow "4/20 in Denver: Part One (NSFW)."
Photo by Aaron Thackeray
Number 2: Some of the profits will go toward free feeds — and free weed

The Lopez-led organization that puts on the Denver 4/20 Rally is a 501(c)(4) nonprofit that's hoping to be approved for 501(c)(3) status (and the ability for donors to receive a tax deduction) in the future. The rally is free to attend, but still generates big bucks thanks to the hundreds of vendors taking part. Lopez notes that some of the proceeds have been earmarked for "providing free weed and food for the homeless."

According to Lopez, closures will include "14th Avenue from Cherokee to Broadway and Bannock from Colfax to 13th Avenue."

Planning to park in front of the main branch of the Denver Public Library, just steps away from Civic Center? Tough luck.

"There will be no parking meters available in front of the library on both sides of Broadway," Lopez reveals. "Those are for tour buses and prepaid shuttles that will be coming in. Anybody parking there illegally will be towed."

Uber is an official sponsor of the Denver 4/20 Rally, and it's offering a special deal for folks who use the service. "People can go on our website and Facebook page and get a code for a discount," Lopez reveals. "Anyone who uses it will get $4.20 off their ride." 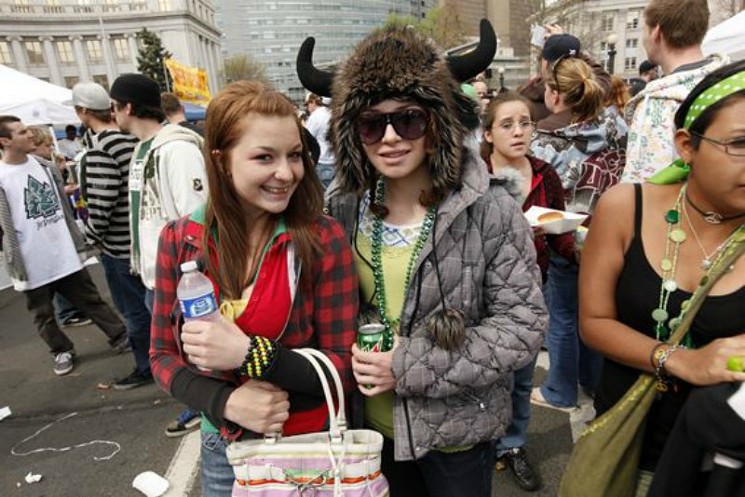 A photo from our slideshow "4/20 in Denver: Part One (NSFW)."
Photo by Aaron Thackeray
Number 6: There are a lot of other transit options, too

The way Lopez sees it, driving to the rally is totally unnecessary.

"There's taxis, there's public transportation," he says. "We're close to the 16th Street Mall, and people can take the light rail in. That's really environmental, and it benefits our city in so many ways."

Number 7: This year, the Civic Center fun will be concentrated

This is the first year in several when the Denver 4/20 Rally will actually take place on April 20. When the date fell on a weekday previously, "the city pushed us toward the weekend," Lopez allows — but this approach "created a weeklong party. Last year, the official day was on a Wednesday, so people still gathered on Wednesday, and the party went into the weekend."

Number 8: You should plan on arriving early — but if you don't, you'll still be able to see what's happening

Music at the park will start pumping through speakers set up throughout the park at 10 a.m., and Lopez advises attendees to show up no later than 2 p.m. in order to get a good spot for 2 Chainz. But even people who arrive at 4 p.m. will have an excellent view.

"We're going to have a giant projection screen that's bigger than the one the Denver Broncos use for their opening party," Lopez says, "so people in the back will still be able to see and hear the event." 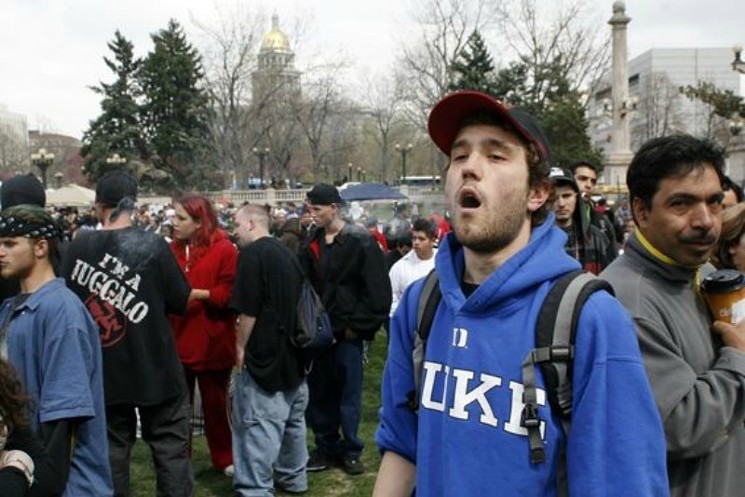 A photo from our slideshow "4/20 in Denver: Part One (NSFW)."
Photo by Aaron Thackeray
Number 9: Clean up after yourself — like the people who live at the park do

"There's a really big myth that the city pays to clean up the park," Lopez maintains. "But we pay for that. And because of all the criticisms that some people have about the rally, we always want to leave the park cleaner than it was before."

Fortunately, he goes on, his crew has some willing helpers: "At the end of the event, without even being asked, our attendees stay and start picking up of their own free will — especially some of the homeless. Since they live there, they like to clean up their own home. A lot of the elite don't, but the working class clean up, too, and so do members of the poor and marginalized communities, who do it genuinely out of their own hearts."

To make their efforts easier, Lopez asks that attendees leave their dogs at home: "When they crap, people step in it. It's just not a good environment for them."

Number 10: The security staff is only looking for one thing

"Weapons," Lopez says. No one wants a repeat of 2013, when fired shots that struck two people in the leg and grazed a third caused a panic in which Lopez was injured. That's why security personnel will concentrate on safety — so the thousands who'll attend can focus on having a great time and exercising their freedom in a very Denver way.