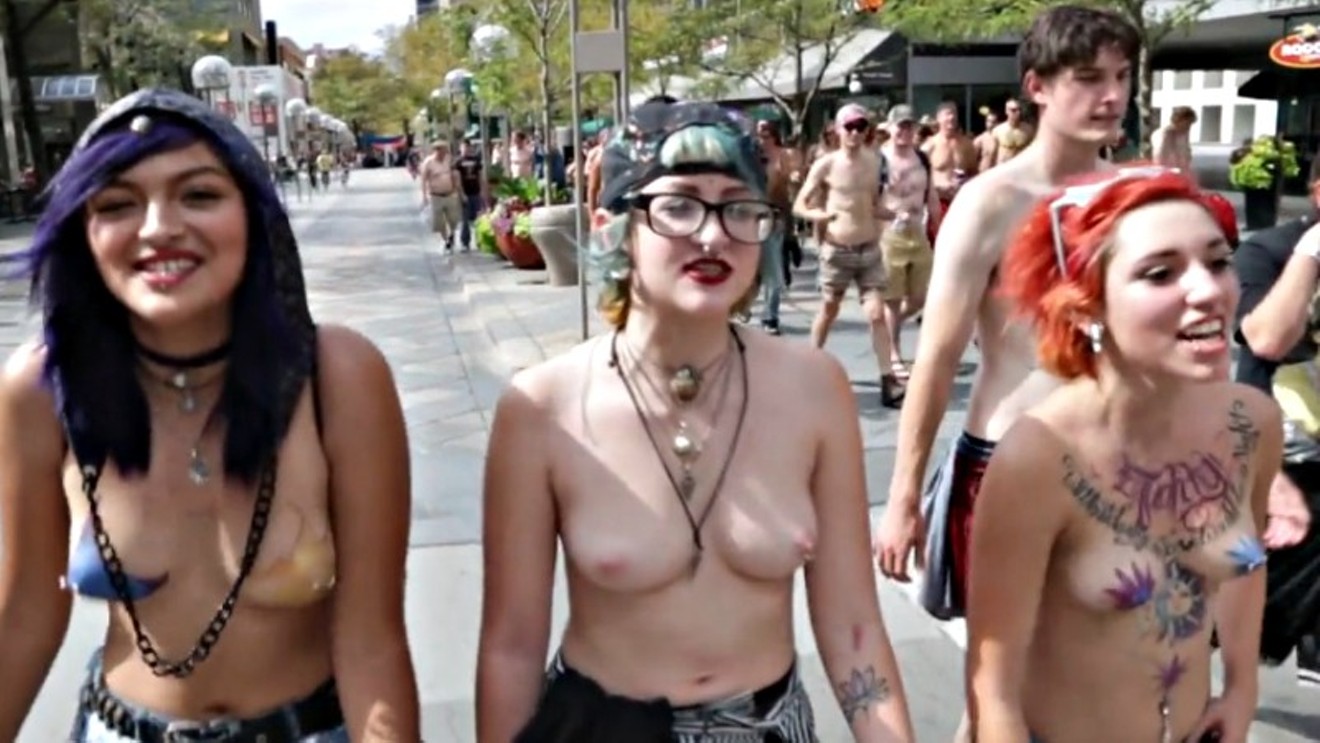 A screen capture from a video of Denver Go Topless Day 2016. Jake Holschuh
Denver Go Topless Day 2016 drew by far the largest crowd in the event's history to a rally and march on the 16th Street Mall to celebrate equality and demonstrate against the idea that it's okay for men to appear topless in public but either distasteful or (in some locations) illegal for women to do likewise. While female participants tend to get the most attention, the main organizer for the gathering, whose 2017 version will take place from 11 a.m. to 5 p.m. on Saturday, August 26, is a man, Matt Wilson. But if that conjures fears of patriarchal exploitation, don't worry: Nothing could be further from the truth.

In the following Q&A, conducted via Facebook Messenger, Wilson discusses his introduction to Denver Go Topless Day, the way he got involved in planning it, the philosophy at its core, and his belief that the parade's power has everything to do with the fact that people of every description join together in a peaceful, positive setting to defy those who support different rules for different genders.

Westword: How did you first get involved with this event?

Matt Wilson: I first saw the event advertised on Facebook in 2014. I remember thinking back to when I was a little kid, when I’d first encountered the double standard of boys being able to be topless and not girls. It was during gym class on a very hot day, and I’d remembered thinking it was silly and unfair that only boys could cool off without their shirts and not girls. I thought it was neat that there were activists working toward equality in this respect, and decided to check it out. 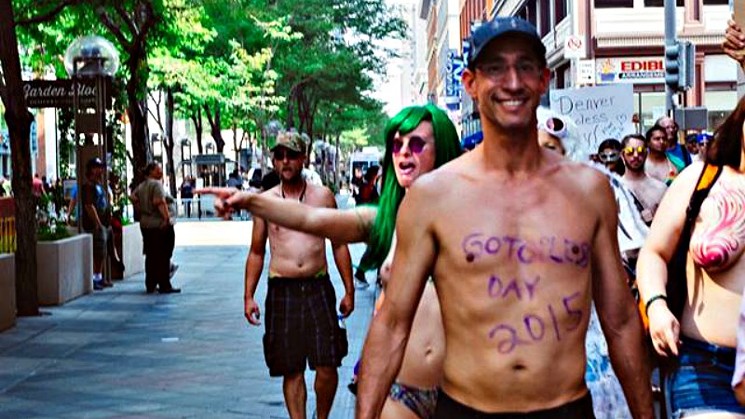 Matt Wilson at the 2015 Denver Go Topless Day.
Courtesy of Noah Graham Photography
How many years have you participated?

When I attended in 2014, I had a long discussion with the coordinator of the event. Our perspectives matched enough that when she admitted she’d be moving out of state, she asked me if I’d be interested in organizing Denver’s 2015 parade. I’ve been the primary organizer ever since.

Why do you feel the event is important?

Three reasons come to mind. First, having two daughters opened my eyes to a completely different perspective. Growing up, they often related instances of being creeped out by grown men looking at them with lust, about boys not respecting their boundaries, about double-standard dress codes and et cetera to infinity. They have an apprehension to walking alone at night to a degree that, as a male, I’ve never had to endure. Over 50 percent of America is female, yet looking at positions of authority, from business to media to judiciary to politics, you’d think women barely exist.

Then there’s the prevalence of stereotypes and double standards. Women are too often seen as the "weaker sex," emotional and nurturing, while men are represented as strong and rational protector/providers. Women can be rational, men can (and should) be nurturing, and in today’s day and age, it often takes two incomes to survive. In our male-dominated society, women’s bodies are commercialized and hyper-sexualized for men’s enjoyment, but if a woman embraces her own sexuality, she is scorned and slut-shamed.

And finally, there's the blame-the-victim mentalities when it comes to rape and harassment. I’m like, c’mon, people. If someone’s going around with a hammer bashing dents into neighborhood cars, the best way to handle it isn’t devoting all our resources to dent-resistant metals and paints and better car alarms. You focus on the person with the hammer. Yet 95 percent of rape-avoidance programs focus on defense strategies instead of anti-rape self-discipline and perpetrator responsibility. It’s ridiculous.

Is topless equality the end-all, be-all cure for objectification and misogyny? Of course not. This is a culture war with multiple fronts, including improved sex ed in schools, anti-harassment guidelines in the workplace, pressuring television and magazines to promote healthier images of women and relationships, and more. Yet by far, media's proliferation of sexualized imagery and nudity in the name of profit is one of the greatest roots of our national dysfunction. America needs to be exposed to non-sexual nudity. To be reminded that context matters. To be reminded that the body is just a body; the person inside is what matters, no matter how much (or little) someone is wearing. We need to break out of the box in which we've allowed ourselves to be penned. 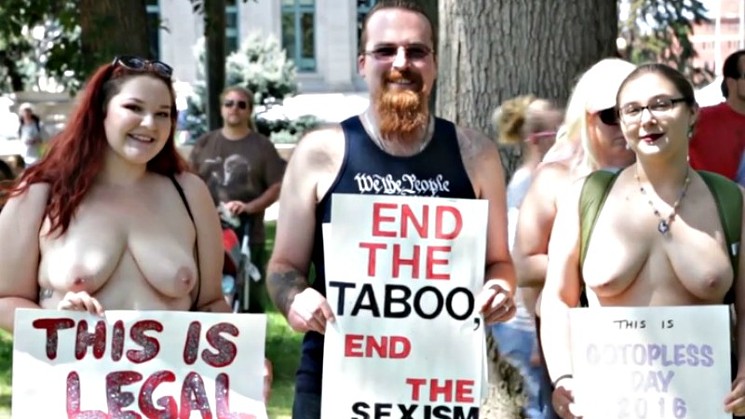 A screen capture from a video of Denver Go Topless Day 2016.
Jake Holschuh
What are the biggest misconceptions about the event?

One is that it’s all about a loosening moral standard — that women just want to flaunt themselves, society be damned. No, this is about pointing out unjust standards that already exist in society. On a 95-degree summer day, a guy takes off his shirt and goes about his business, whether mowing his lawn, riding a bike or simply walking down the street, and nobody bats an eye. But a girl does it, and all of a sudden people are freaking out about how a woman is sexual. That’s wrong.

The other is that it’s too dangerous. In recent years, the Denver GoTopless Day parade has shown that men and women can practice topless equality without the objectification or assaults that critics are so afraid of. We are very clear that this is a social-activist issue and not a Mardi Gras, attendees are respectful of boundaries, and public response has been incredibly supportive.

How has the event grown over the years?

The parade’s still more than a week away, and more than 900 people have clicked “Going” on the Facebook event page. I’ll soon be sharing the event to Denver news channels, Colorado event pages and Twitter. I expect this year’s participation to be epic.

Do you feel the success of the event in Denver is having an influence in other places around the country?

I can only hope. Nothing makes a splash quite like a parade of men and women practicing topless equality; it definitely opens dialogue. Since we’ve started, a U.S. District judge struck down a Fort Collins ordinance that specifically banned women’s nipples and not men’s. Denver’s parade is only one of many occurring throughout the nation. Visit here for the most up-to-date list. 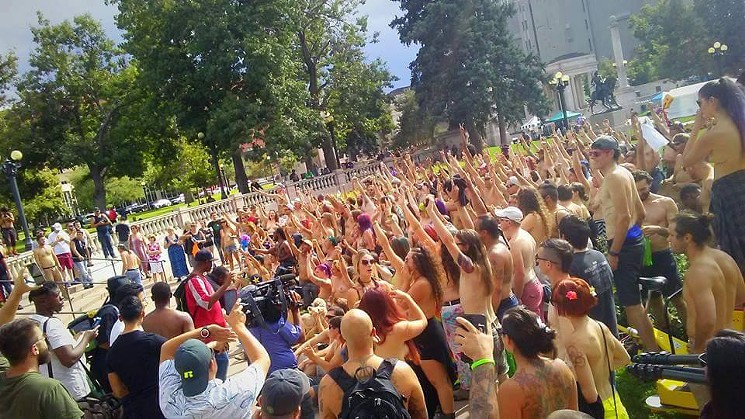 The crowd at the 2016 Denver Go Topless Day.
Photo by Matt Wilson
Are you the main event organizer or do you work with a group of people to make it happen?

I carefully frame the issue and moderate comments on the Facebook page but could never have achieved this level of success alone. Other activists have gotten on board, adding content, assisting comment moderation and spreading the word. David Caballero and Mythica Von Griffen from Denver’s Body Art Jam have donated time and helped spread the word in the art world, sex-positivity activist Amy Eudis McBain has reached out into the sex+ realm, others into the modeling and photography world, body-positive realms and more. Denver’s police department has been gracious. GoTopless.org has listed us nationally. Plus all of the Denver newscasters have broadcast the event accurately and fairly. I am eternally grateful.

What are the specifics of this year's event — when it will get under way, where, how long it's expected to last, and anything that's unique or different about what you're planning for this year?

• We'll meet up at the Bannock Street end of Civic Center Park, between 14th and Colfax, starting at 11 a.m. for meet & greet, news interviews, and body-painting. (I suggest parking farther down and parallel to 16th Street Mall, then riding the free Mall Shuttle up to within a block of Civic Center Park.)

• Between 1 p.m. and 2 p.m., we'll start our march down 16th Street Mall and back. We set a mellow pace, to allow for streetlights and traffic, and so as not to leave anyone behind. Usually takes around 45 minutes to walk.

• Upon our return to Civic Center Park, we'll gather for a group photo with the Capitol Building in the background.

We’ve kept things pretty basic to avoid permit issues. Civic Center Park is just the launch pad and return point for our march, with no interference of concurrent events. No attendance fees, electronics, vending or street closures. Looking at the interest so far this year, I’m thinking next year we’ll start needing permits. That’ll open up whole new levels to the celebration.

What message do you hope the event sends?

That the legality of Denver’s topless equality isn’t the collapse of society; it’s a doorway to improvement. This is an opportunity to shift perspectives — to become aware of personal responsibility to promote a just society, not just once a year, but in everyday interactions. Knowing is half the battle. The rest is up to you.