Thinkstock
The Rocky Mountain High Intensity Drug Trafficking Area, a federally funded law enforcement group with an admitted anti-marijuana bias, has published the fifth volume in a series of reports about the impact of cannabis legalization on Colorado. Predictably, the new analysis, accessible below, is crammed with shocking statistics, and while many of the claims, including ones pertaining to an alleged spike in youth marijuana use in the state, aren't supported by other, more reliable studies, expect them to be touted by the roll-back-the-pot-legalization-clock crowd anyway.

RMHIDTA describes itself on its website as "an important component of the President's National Drug Control Strategy." It's said to provide "additional federal resources to those areas to help eliminate or reduce drug trafficking and its harmful consequences. Law enforcement organizations...assess drug trafficking problems and design specific initiatives to reduce or eliminate the production, manufacture, transportation, distribution and chronic use of illegal drugs and money laundering" in an effort to "reduce drug trafficking & related crime and violence."

The local branch of the organization is operated under the supervision of director Tom Gorman, who has acknowledged in this space that some of the data assembled by the RMHIDTA is opinion-based, meaning it may not pass muster in a scientific survey. But in his view, the studies allow folks "to look at trends over a period of time to see if this data supports other data."

The first edition of "The Legalization of Marijuana in Colorado: The Impact" was released during the summer of 2013; much of its focus was on what was characterized as the increasing number of Colorado pot seizures beyond state lines. Part two, released in August 2014, argued that pot-related driving fatalities were up 100 percent in five years. Part three, which was teased in the run-up to 4/20/2015, continued its jihad against pot with more alarming assertions about driving dangers and teen dopers, while part four, from January 2016, doubled down even further. 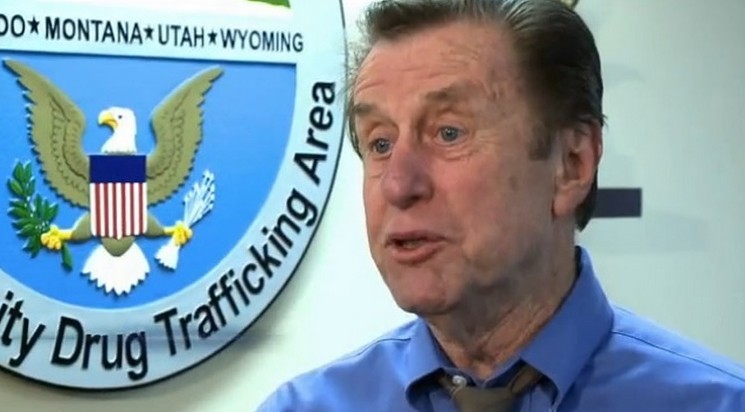 Tom Gorman is head of the Rocky Mountain High Intensity Drug Trafficking Area.
Fox31 file photo
Now comes part five, whose errors come fast and furious. Indeed, the press release for the document asserts that "Colorado legalized recreational marijuana in 2013," which is incorrect in two different ways; the vote for legalization, via Amendment 64, happened in November 2012, while recreational sales began on January 1, 2014. Keep that in mind when considering the following statements about what's happened in the state over the past four years:

• In 2016, 20 percent of all traffic deaths were marijuana related compared to only 9 percent six years ago

The report itself contends that "marijuana-related traffic deaths when a driver was positive for marijuana more than doubled from 55 deaths in 2013 to 123 deaths in 2016," adding that "marijuana-related traffic deaths increased 66 percent in the four-year average (2013-2016) since Colorado legalized recreational marijuana compared to the four-year average (2009-2012) prior to legalization." However, it's important to note that prior to 2014, many jurisdictions didn't actually track the link between marijuana and traffic accidents, and meaningful stats are still hard to find — a fact that naturally inflates these digits in significant ways.

Problem is, plenty of other studies come to very different conclusions, as marijuana reformer Mason Tvert pointed out to us after the fourth RMHIDTA salvo. As he noted, "The federal government already spent money to research use by people in Colorado, and SAMHSA [Substance Abuse and Mental Health Services Administration] has the national survey, and it showed teen use in Colorado hasn't changed in the last several years. The National Institute on Drug Abuse has a survey that showed teen use hasn't changed, the Centers for Disease Control shows the same thing, and Colorado has the Healthy Kids survey done by the Colorado Department of Public Health and Environment in conjunction with the departments of human services and education — and that shows teen marijuana use hasn't gone up, either. But this little group of narcotics officers has decided to put out something that says the opposite of what all these surveys show. And even though it's not news, it's being treated that way."

Indeed, TV stations such as Denver7 and KKCO have already published pieces on the report that portray it as an objective look at the situation rather than an attempt to undermine the entire rationale for marijuana legalization by an organization with a vested interest in maintaining the status quo. And expect folks such as Jeff Hunt, the Colorado Christian University educator who just staged a daylong anti-pot event, to use the figures, as he's done in the past. That's the reason the Rocky Mountain High Intensity Drug Trafficking Areas has published five reports to date, and why it will undoubtedly keep on doing so for years to come.

Click to read "The Legalization of Marijuana: The Impact, Volume 5, October 2017."