Rochelle Johnson, "Repose," oil on canvas. Johnson's work can be seen this week at Children's Hospital Colorado and ILA Gallery. Rochelle Johnson
Shows celebrating Black History Month are popping all over this month, as are early additions to the Month of Photography 2021’s widening roster (MOP officially launches in March), making for a rich multicultural and photo-based First Friday weekend. But not entirely: At other galleries, it’s business as usual, which in these times is a very good thing.

Here are some of the hottest shows around town:

Follow hip-hop legends down a thought-provoking immersive trail.
Courtesy of Rap, Race, Identity
Rap, Race, Identity: Race in Hip Hop’s America
Urbanity Gallery, 5136 East 29th Avenue
Through February 14
$25 per group of up to five people; purchase tickets and RSVP online in advance for a time slot (visit website for information about student/discounted tickets)
Race, Rap, Identity, a collaboration between University of Colorado Boulder communications professor Danielle Hodge and artist James Roy II, is an immersive art show that blends Roy’s imagery with aspects of listening and scholarly thinking encountered as viewers work their way through a 45-minute experience examining the words of rappers JAY-Z, Kanye West, Kendrick Lamar, J. Cole and Nipsey Hussle. The $25 fee covers groups of up to five people, with the option of adding fine-art prints of Roy’s portraits.

Jen Starling captures marginalized women at Valkarie Gallery.
Jen Starling
Jen Starling
Valkarie Gallery, 445 South Saulsbury Street, Belmar, Lakewood
February 3 through February 28
First Friday Art Walk: Friday, February 5, 6 to 8:30 p.m.
Painter Jen Starling begins her guest-artist stint at Valkarie with a portrait show of dreamy depictions of women and people from other marginalized groups, all captured in oils with a real sense of movement evocative of her own background in dance. See her recent works in person at the gallery or online.

Rick Dallago, "The Human Stain."
Rick Dallago
Rick Dallago: Paintings, Photographs, Perspectives
Museum of Boulder, 2205 Broadway, Boulder
February 3 through April 5
Boulder artist Rick Dallago — who displays an updated affinity for Norman Rockwell in his representational oil pastel paintings, photographs and collages — brings humor and personality to the Museum of Boulder with a show that anyone can appreciate. Evidence of Dallago’s years of work in the film industry in L.A. also turn up in his subject matter and style. 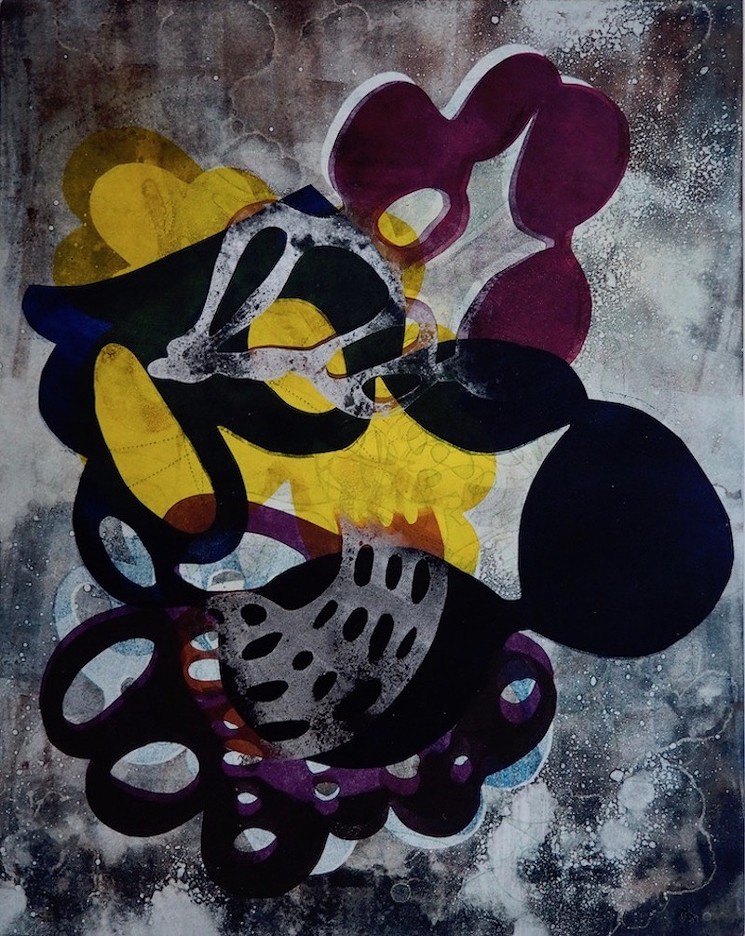 Images by Shadows Gather, scanned from Fuji Instax film format and printed on archival paper.
Shadows Gather
Shadows Gather, 2019-2020
Dateline Gallery, 3004 Larimer Street
February 5 through March 13
Opening Reception: Friday, February 5, 6 to 11 p.m.
Dateline gets a head start on Month of Photography 2021 with an exhibition of photographic nightlife portraits by Shadows Gather, who seeks out members of the after-dark fringe, from drag queens to punks of Denver, Austin and Los Angeles, as subjects. Show up in the right gear to this trendy opening, and you might just end up in one of her shots.

Frank Lucero, “Everything Lost,” oil on canvas.
Frank Lucero
Connections: New Works by Frank
Alto Gallery, 4345 West 41st Avenue
February 5 through February 27
Opening Reception: February 5, 6 to 10 p.m.
For his first solo show in twelve years, painter Frank Lucero presents work created since the beginning of the pandemic last year and inspired by the sense of being caught in an indefinite time of solitary confinement. It’s a new look for Lucero, who visualized the situation in a series of mixed-media paintings utilizing monochrome grids and mark-making evocative of a prisoner counting off the days. Johnny Draco, “Whispers,” acrylic on canvas.
Johnny Draco
The Black Vanguard
Sasha the Kid: New Kid on the Block
ILA Gallery, 209 Kalamath Street, Suite 12
February 5 through February 28
Opening Reception: Friday, February 5, 6 to 10 p.m.
RSVP for reception time slot in advance
ILA Gallery tapped a group of local and national urban artists to fete Black History Month with a look to the future for Black artists of color. Along with familiar Denverites like painters Detour and Rochelle Johnson, photographer Narkita Gold and former Magnet Mafia artist and current furniture designer and builder Harrison Nealey, participants in the show include muralist Austin Blue of Atlanta and Kidrobot designer Johnny Draco, among others. Alongside the group show, Denver phenom Sasha the Kid is featured in a solo of fantastic paintings reminiscent of Basquiat and Picasso.

Paul Cézanne, "A Painter at Work (Justin Gabet)," about 1874-75. Oil paint on panel.
Denver Art Museum
The 19th Century in European and American Art
Denver Art Museum, 100 West 14th Avenue Parkway
Opens Sunday, February 7
The Denver Art Museum premieres newly installed second-floor galleries showing off 85 works from the museum collection for The 19th Century in European and American Art on Sunday, which runs heavy (but not completely) on landscapes by Claude Monet, Paul Cézanne and others. The show is included in museum admission, free to $13; purchase tickets in advance for timed entry slots.

Conrad Guevara and J Rivera Pansa, "Banana Hammock"
LMP PDA, Lane Meyer Projects, 2528 Walnut Street
February 8 through February 21
Oakland artist duo Conrad Guevara and J Rivera Pansa will share “Banana Hammock” in the window gallery at Lane Meyer Projects, and we can only imagine what that will turn out to be, though it should be good. They will be donating a 40 percent share of sales to the Sogorea Te’ Land Trust, an urban Indigenous women-led land trust based in the San Francisco Bay Area that facilitates the return of Indigenous land to Indigenous people.