Make Mrs. Claus Blush on the Last First Friday of 2021

Babes Around Denver has been throwing parties for two decades. Kate Levy
"Show off your best looks that would make Mrs. Claus blush." That's what Babes Around Denver LLC is advising for its final First Friday event of the year, which has a "Naughty Elf" theme. "It's a dance party," says BAD founder Dede Frain of the bash set for Friday, December 3, at Tracks.

BAD, Denver's largest lesbian social group, got started "in the fall of 2002, when a group of women were discussing their desire to get together for happy hour on a regular basis," Frain recalls.

Using an email list she had from organizing golf tournaments, Frain sent out an invite to a December happy hour at a now-closed lounge on Colfax Avenue, and 150 women came. A second happy hour attracted 220 women; the third, 350."That's when I realized that this could evolve," Frain says, and she put on her first official BAD First Friday event in March 2003, after forming the LLC.

There was a lack of women's venues in Denver at the time — "Women go out less than men," Frain notes — and she wanted to create a space where women could gather and express themselves. While a number of venues have hosted BAD's First Friday over the years, Tracks has been its spot since 2007.

"The event continues to be the largest monthly women’s party in the U.S.," Frain says, "and thousands of women have made new friends. Many have entered new relationships, and some have even started new businesses as a result of the connections made at First Friday."

Today, up to 1,500 women will sometimes attend a First Friday event. Even so, BAD remains a one-woman operation, though Frain has relationships with photographers and venue managers. "I work with the entire staff at Tracks, but I provide people working in the entry and the dancers," she explains. She lauds the nightclub's light projection system, calling it "similar to the Van Gogh Immersive." 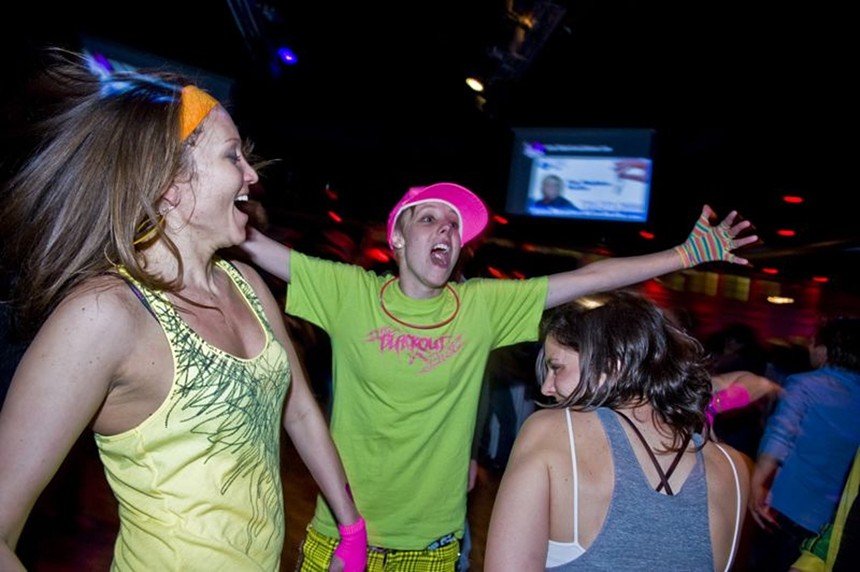 BAD is looking at a big anniversary party in March.
Kate Levy
"Every month, First Friday has a theme, and many guests dress up, and Tracks provides the best sound and lights to align with the theme," Frain continues. "The format for First Friday is unique in that we have three rooms with four DJs every month. We open at 6 p.m. with country-Western music, and starting at 8, we add Top 40, retro, Latin, hip-hop and all things dance for the rest of the evening." The DJ lineup on December 3 includes DJ Soup, DJ Tatiana, DJ Markie and DJ Blaque Gurl.

Although BAD is mainly an event-planning outfit, it's partnered with other LGBTQ groups in Denver, including One Colorado and The Center — LGBTQ Colorado, as well as the National Center for Lesbian Rights, working to raise awareness for LGBTQ rights, whether through political or non-political gatherings, and donates a portion of its profits to the cause. It's also supported a number of charities by hosting events ranging from wine tastings to school-supply drives, brunch benefits, bike rides and more.

BAD is a longtime PrideFest sponsor — Frain has served as grand marshal of the Pride parade — and hosts the Official Women's Pride Party during Denver Pride. This year's event served almost as a coming-back-out party for BAD. "I had the eighteenth-anniversary party on First Friday in March of 2020, and a week later, everything shut down with COVID," Frain recalls. "We came back roaring in June; I had 1,800 people at First Friday and 2,000 at the Pride party." Now she's looking at a big twentieth-anniversary celebration at the First Friday event in March 2021.

BAD presents First Friday December: Naughty Elf at Tracks, 3500 Walnut Street, starting at 6 p.m. Friday, December 3. Tickets are $10 until 10 p.m., and $15 from 10 p.m. to 2 a.m.
KEEP WESTWORD FREE... Since we started Westword, it has been defined as the free, independent voice of Denver, and we'd like to keep it that way. With local media under siege, it's more important than ever for us to rally support behind funding our local journalism. You can help by participating in our "I Support" program, allowing us to keep offering readers access to our incisive coverage of local news, food and culture with no paywalls.
Make a one-time donation today for as little as $1.
Emily Ferguson is Westword's Culture Editor, covering Denver's flourishing arts and music scene. Before landing this position, she worked as an editor at local and national political publications and held some odd jobs suited to her odd personality, including selling grilled cheese sandwiches at music festivals and performing with fire. Emily also writes on the arts for the Wall Street Journal and is an oil painter in her free time.
Contact: Emily Ferguson