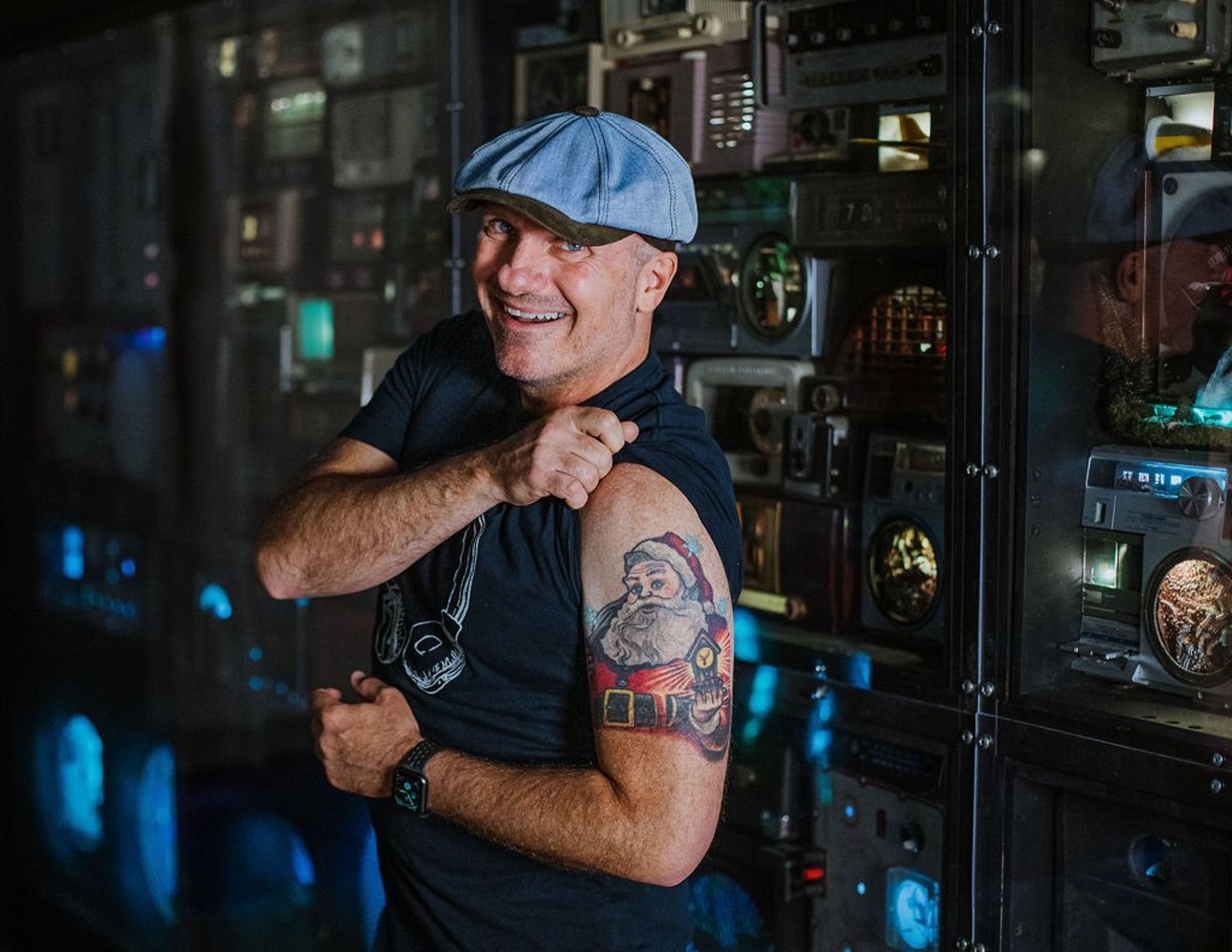 It all began, appropriately enough for a guy who went by the moniker “Mister Christmas,” with a holiday present for his girlfriend. “I had this idea to build this little Christmas village,” recalls Scott Hildebrandt. “I put it under glass, under this little cake dome. I have a little bit of electrical engineering background — just enough to be dangerous — and lit the thing up. She loved it.” That 2008 gift was the beginning of an artistic journey that’s led to a successful career and now a major display at Denver’s Meow Wolf. 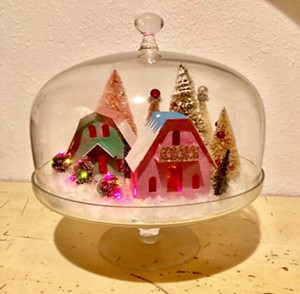 The Christmas diorama that started it all.
Scott Hildebrandt
"It was just a fun thing, a little hobby,” Hildebrandt says. The idea came from his childhood, when he’d work alongside his grandfather to set up an old and intricately detailed train set. “That set me on the path to miniatures,” he explains. “And that led to models, LEGO sets, army men, all that fun stuff. The culmination of the love for all that started pouring through my work with vintage Christmas pieces, and that led to the miniature work I’m doing now.”

He isn’t called Mister Christmas for his miniatures work, though. That name pre-dates Hildebrandt's artistic career by quite a few years. “I’ve had a super-elaborate light display that I do at my house every year,” he notes. “I started that in the early 2000s. It’s computer-controlled and syncopates certain songs to the light display. If you hook an FM transmitter up to it, you can broadcast it. I just put a sign up in the front yard — tune in to 88.3, and you can catch the Mister Christmas show if you drive by.”

The transition from creating big Christmas displays for family and friends to miniatures for the public was not immediate; Hildebrandt had a 25-year career in IT before a garage sale inspired him to go in a new direction. “I bought an old wooden radio, and it came with a donor radio so you could use it for spare parts to restore the first one, which is what I did," he says. "When I was done, I had an empty shell of this beautiful old tombstone radio, and the lightbulb came on: I could repurpose this. That’s what started me down the path I’m on now, taking old things like radios or clocks or televisions that didn’t work and clearing them out to make room for my love for miniatures and electronics. It became a challenge for me, making these old things something new.” A diorama of Union Station.
Matt Nager
He began creating one after the other. They are “adult dioramas inside nostalgic vintage vessels,” he says, and making them is almost like “building a memory inside of a memory.”

Hildebrandt has no interest in putting people in his landscapes. “The streetlight’s on, or there might be a light on in that store, but there’s nobody in it," he says. "There might be a little dog in the window, but that was it. It drew people in; it made them ask questions like, 'Why is the light on in that store?' Or, 'I wonder if that dog wants to go home?' Or, 'Is it about to rain?' Miniatures do that to people. You’re able to step into it yourself, create your own narrative, like you did when you were a child."

The nostalgia element became central to Hildebrandt’s work. “I’m a kid of the ’80s, so I’d use boomboxes and Walkmans and Game Boys and things like that,” he says. He also challenged himself in other ways,  using more intricate and unique LED lighting, like the pinhole night skies he’s employed, or robotics that allow for movement in a display — sometimes in subtle ways, sometimes in ways that make up the personality of a piece.

The whole thing was really just a hobby until Hildebrandt displayed his work at the 2015 Holiday ManCraft fair put on by the Ink Lounge screen-printing studio. “These were craft fairs just for guys — fifty of us making stuff like ceramics and leather belts and hot sauce and T-shirts," he says. "That was where I met the director of the Cherry Creek Arts Festival. She came down to check things out, and she stopped at my booth. She asked me why I wasn’t applying for a booth at CCAF, and I laughed and said, ‘Because I'm at a craft fair…and this is silly stuff, but I love doing it.’ And she said that this was art, and that I really needed to apply.” Hildebrandt followed CCAF director Tara Brickell's suggestion, applied for the 2016 fest and was awarded one of five spots for emerging artists. That year, he won Best of Show.

“That was validation: This was art,” recalls Hildebrandt. He quit his day job and threw himself into the art world full-time. “I gave myself twelve months to see what would happen.... Years later, I’m still here, still doing this.” 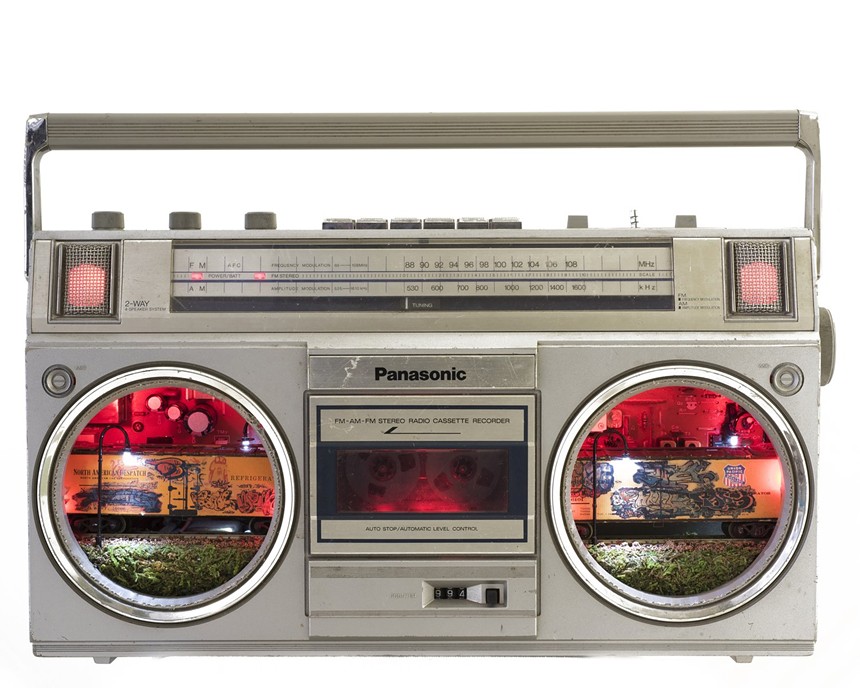 Nicholas Buckingham
The popularity of his work has been growing ever since. “It’s sort of a two-punch bang,” Hildebrandt says of his fans’ response to his work. Some of them recognize the vessel first before marveling at the miniature world inside it. It happens the other way, too. “I get people who look at a piece and say that they love the cityscape they see, and then they step back and notice that, hey, it’s inside a boombox," he explains. "Then I get to reminisce with people about what they remember and what was important to them, and I love the opportunity to connect with people on that level.”

And then came Meow Wolf. “It was the end of 2017; I got this random email,” recalls Hildebrandt. “It was someone saying they were from Meow Wolf, asking if I wanted to submit a proposal for the Denver location. I thought it was totally fake. I’d been getting all these emails from so-called galleries saying they loved my work and would love to show it if I wanted to pay them $2,500.” He showed those emails to his contacts at CCAF, who confirmed that they were scams and warned him to stay away. “So I was pretty skeptical, and I sort of blew off the Meow Wolf thing until the very last day. And that day, I remember thinking, 'It would really suck if this were real and I’m ignoring it.' So I took the day and all the way up to midnight, when it was due, and sent them a proposal, and they loved it.” 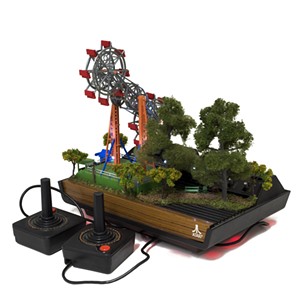 An Atari ferris wheel.
Nicholas Buckingham
What Hildebrandt ended up building for Meow Wolf Denver is “pretty much exactly what I originally proposed,” he says. “It’s over 200 separate dioramas, all built into repurposed radios, TVs, clocks, cameras, things like that, all bricked into the walls on either side of the hallway. Seventeen feet long, ten feet high, twelve feet wide. The theme is sky, land and sea.” The dioramas include light displays, movement and sound, and the whole thing is a meticulously planned experience with miniatures.

With the Meow Wolf installation behind him, Hildebrandt is back to working on smaller projects to sell on his website or on Instagram. But his reputation is anything but miniature in scale, and Mister Christmas is finding it harder and harder to keep up with demand for his unique appeal to nostalgia.

“It humbles me to hear how the pieces move people,” he says. “There’s nothing in the world like it.”

Check out Scott Hildebrandt’s work on his website or on his Instagram.
KEEP WESTWORD FREE... Since we started Westword, it has been defined as the free, independent voice of Denver, and we'd like to keep it that way. With local media under siege, it's more important than ever for us to rally support behind funding our local journalism. You can help by participating in our "I Support" program, allowing us to keep offering readers access to our incisive coverage of local news, food and culture with no paywalls.
Make a one-time donation today for as little as $1.