Art Attack: New Shows and Events This Weekend in Denver

Plan ahead, and get ready to paint the town:

Eamon Ore-Giron Artist Talk and DJ Set
The Holiday Theater, 2644 West 32nd Avenue
Thursday, April 28, doors at 6 p.m.
$15 MCA members, $20 non-members
Eamon Ore-Giron’s large-scale paintings homogenize twentieth-century modernist art movements to great visual effect, one minute reflecting age-old Indigenous patterns, Malevich the next, and so on, in a geometrical, historical mix. Competing With Lightning, his show at MCA Denver, also reflects the musical waves of his performance mode as DJ Lengua, with paintings reminiscent of the shapes and rays in Oskar Fischinger’s influential music animations of the ’30s and ’40s, in a tapestry-lined sound installation set apart from the rest of the exhibition. This talk — a conversation between MCA curator Miranda Lash and Los Jaichackers, the DJ collaboration of Ore-Giron and fellow artist Julio Cesar Morales — dives into this piece of his practice. Bonus: Stick around after the talk for a live set by Los Jaichackers.

Untitled: Creative Fusions
Denver Art Museum, 100 West 14th Avenue Parkway
Friday, April 29, 6 to 10 p.m.
Included in museum admission
Untitled: Creative Fusions brings the theme of "Voices Breaking Down Borders" to the Denver Art Museum under the leadership of musician/healer and artist Bianca Mikahn and muralist Danielle SeeWalker, a citizen of the Standing Rock Sioux Tribe. The liberating evening will immerse visitors in American cultures of the displaced and underserved through Indigenous rituals, food, comedy and documentation by film and imagery, as well as Black performance, music, therapies and visuals. It's all tied into the museum’s La Malinche exhibition and its themes of cultural reclamation.

Courtney Giblin, "Yin" (detail).
Courtney Giblin
Line and Weight: Courtney Giblin and Clark Valentine
Firehouse Art Center, 667 4th Avenue, Longmont
Friday, April 29, through June 5
Yoga and Musical Meditation: Saturday, April 30, 10:30 a.m. to 1 p.m.
Artist Talk: Thursday, May 5, 6 p.m.
Second Friday Opening: Friday, May 13, 6 to 9 p.m.
Artists Courtney Giblin and Clark Valentine both work within the limited strictures named in their shared exhibition’s title, which not only intimates a spare compositional vision, but also an uncomplicated, meditative practice. That might explain why Firehouse added a morning of yoga, meditation and kirtan (Hindu chanting) to its programming for Line and Weight on Saturday, April 30. The 10:30 a.m. yoga class has a $12 fee and runs for an hour; kirtan begins at 11:45 a.m. and will be followed by refreshments and show viewing. 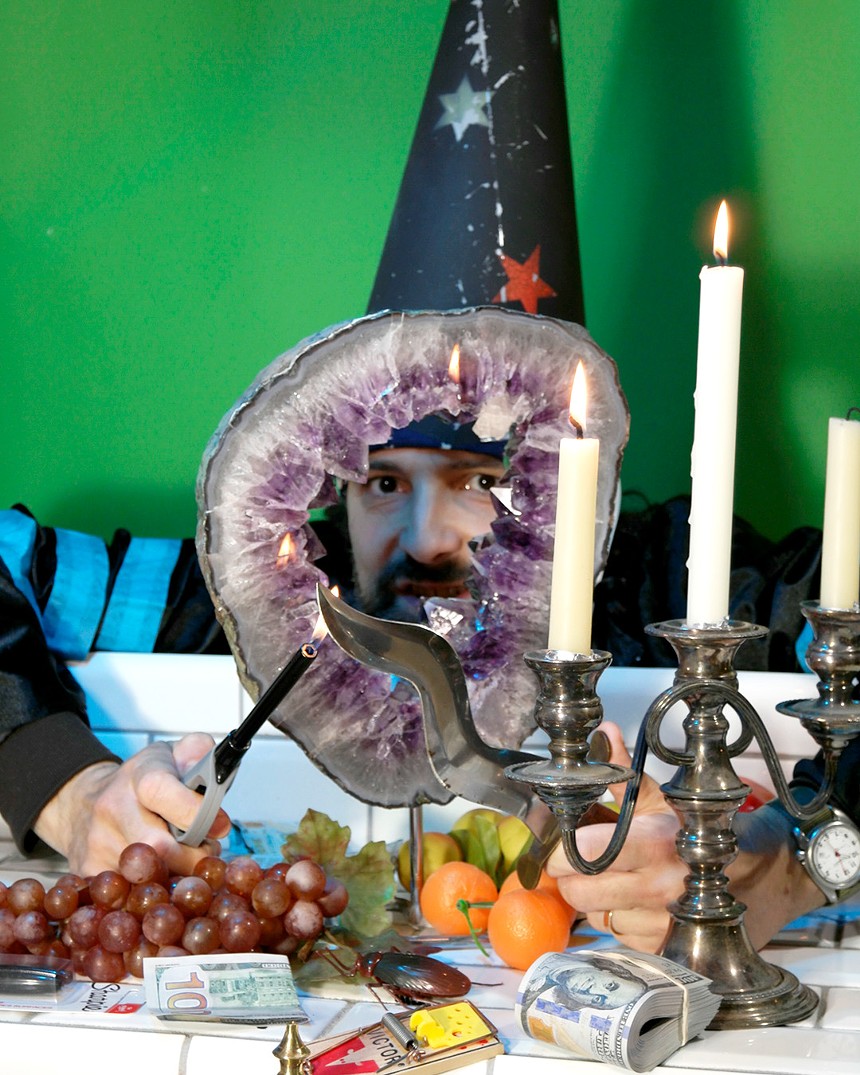 Matt Tripodi, “No One Hurt,” acrylic, China marker, crayon, spray paint on canvas.
Matt Tripodi
Matt Tripodi, 1982
Leon Gallery, 112 East 17th Avenue
Through June 11
Opening Reception: Saturday, April 30, 7 to 11 p.m.; karaoke at 9 p.m.
Matt Tripodi named this Leon show 1982 for his birth year, a clue that the work therein is autobiographical on some level. In this case, he shows an inherent sense of inbetweenness or, as he describes it, “being caught between two disparate generations, analog and digital.” In that spirit, he used manual tools — neon, airbrush, wood-burning, etc. — to create art that might bring a smile to the lips of his fellow millennials.

Modern Women/Modern Vision: Works From the Bank of America Collection
Denver Art Museum, 100 West 14th Avenue Parkway
Sunday, May 1, through August 28
Anderman Photography Lecture: Sandy Skoglund, Tuesday, May 31, 6 to 7 p.m., $10-$20 (museum members free)
Women have always upheld their end of the photography canon: Berenice Abbott, Diane Arbus, Margaret Bourke-White, Imogen Cunningham, Dorothea Lange, Cindy Sherman and a host of others whose works are among the 100 images of Modern Women/Modern Vision have proven so again and again. Perhaps it was because it was easy to independently pick up a camera and start shooting, but these women stand tall next to their male counterparts. For context, the exhibition is organized in six sections to help you through it, exploring female inroads in photography in terms of innovators, documentary work, the Photo League (a cooperative formed in 1936), modern masters, environmental work and the global lens.