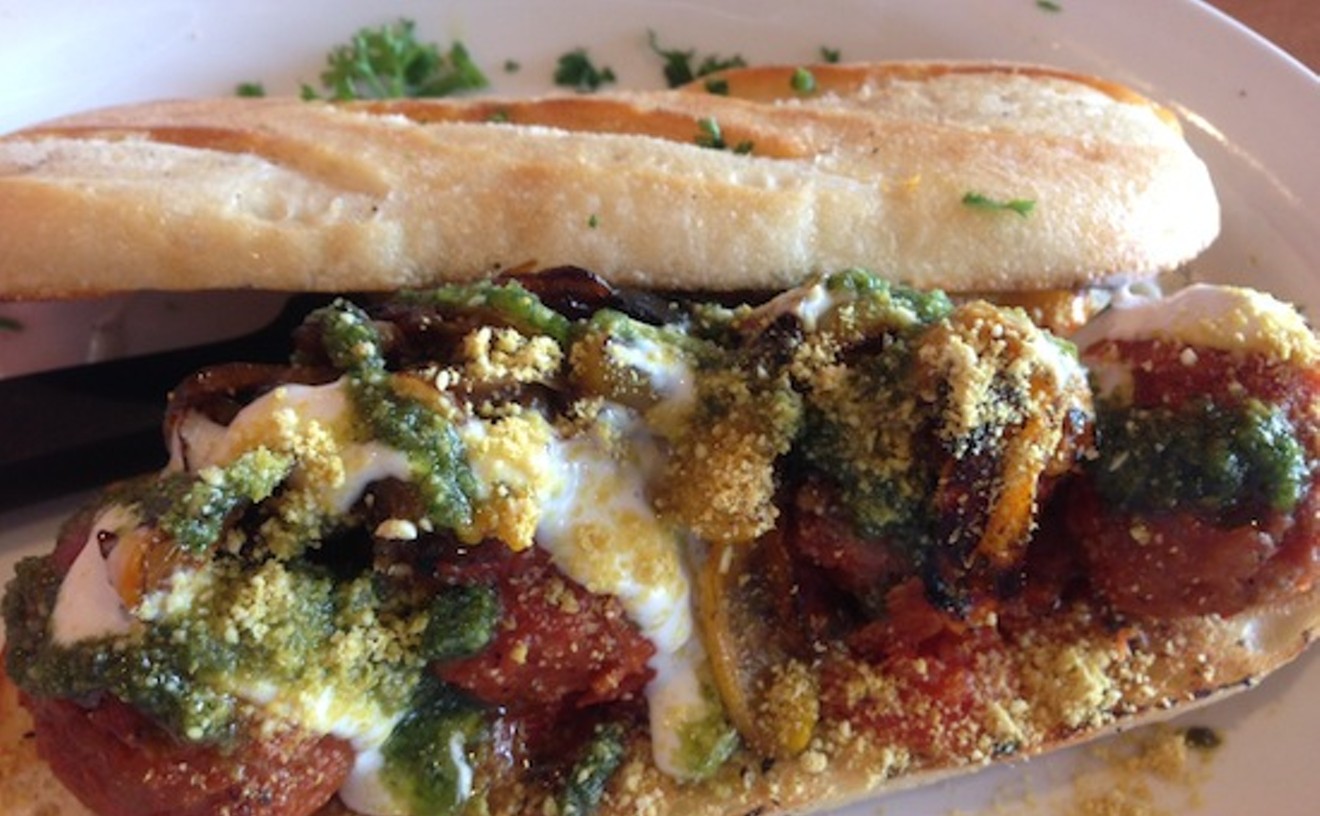 Native Foods might be a link in a California-based chain, but it's also one of the best things to have happened to vegetarians in Denver all year. Plus, it's one of the most carnivore-friendly plant-based restaurants you'll ever visit, with an emphasis on meat substitutes (seitan, "chicken" and more) that are all made in-house and are some of the most convincing meat substitutes you'll ever taste. Native Foods goes far beyond soups and salads (although those offerings are invariably delicious), serving up a variety of sandwiches, chef's-special plates and desserts that will make you want to return again and again to try everything. And for special occasions like Thanksgiving and Valentine's Day, Native Foods puts together vegan-friendly feasts perfect for a celebration.

There's not a lot besides burgers and shakes on the menu at your neighborhood Park Burger. But the eateries (a fourth is coming soon) don't need much more than a darn good burger to thrive in this cowtown — especially when that something extra just happens to be the city's best veggie burger. The grain-based patty is made in-house (there's no egg, so it's vegan-friendly, too) and grilled on the flat-top, then served on one of Park Burger's good buns in a paper-lined basket. The kitchen crew will help adjust the specialty burgers to make them vegan-friendly, or you can create your own by adding some of the toppings available on the long list. So long, in fact, that even the most particular plant-based eater should be able to enjoy his own unique version of the best veggie burger in town.

There are more ways to dress a hot dog than there are stars in the galaxy — at least that's how it seems when you step up to the counter at Steve's Snappin' Dogs. And for those who eschew meat, this glorified hot-dog stand has made it a point to include as many plant-based options as possible. Steve's even has vegetarian green chile to cover your veggie dog with — and on its own, the chile is almost indistinguishable from its meaty counterparts. If you're looking for a traditional-style hot dog without the traditional health issues, look no further than Steve's.

If you're looking for Julia Child-style crepes, don't go to Lotus Vegetarian Restaurant. Inside this tiny, cheerful hole-in-the-wall, with its pink façade and green and blue walls, owner Thuy Pham caters to the vegetarian and vegan sets, so her crepes shun the eggs, white flour and cream that Child used in spades. A turn on the traditional banh xeo (made with pork and shrimp), Pham's version is made with coconut milk and rice flour, with turmeric adding a splash of deep yellow color. Thick as a fluffy omelet, the crepe is filled with a mixture of bean sprouts, carrots and tofu and folded in half, not rolled. Mildly spiced, it's meant to be wrapped in the lettuce and fresh herbs that come on a separate platter, then dunked in nuoc cham. But since this is a vegetarian restaurant, the sweet-and-sour dipping sauce is made without fish sauce, so the flavors of crepe and herbs take center stage.

Pho and bun dishes with grilled meats are the comfort foods of Vietnamese kitchens, giving diners just a hint of the exotic. While Viet's certainly does an admirable job with the basics, the more adventurous side of the menu really shines. Platters of crab and lobster dressed in thick sauce emerge from the kitchen at regular intervals; orders of goi dac biet bring salads layered with jellyfish and drizzled with a dressing pungent with fish sauce. If you're not sure what you want on the menu, just point and ask; the staff is always willing to explain unusual combinations, what to do with that side of wonderfully funky sauce, or which raw herbs and greens to stir into the simmering goat-rib hot pot at the center of the table. Viet's stands out from the competition for its deep menu and ability to surprise with every plate, whether you're just in for a bar-food standard of stuffed chicken wings or impressing guests with whole fried catfish.

Last year, Karen and Rob Lawler, who own the Truffle — Denver's best cheese shop — opened the Truffle Table, Denver's best wine-and-cheese bar. The kitchen, helmed by Crickett Burns, turns out everything from alluringly arranged boards of artisan cheeses with delicious accompaniments to pâté de champagne and all-you-can-stomach raclette (Karen calls it "Swiss sex"), offered every Wednesday night for $40 per couple. And nothing pairs better with a choir of cheese than a symphony of wine (including "stickies," an Australian slang word to describe sweet wines) and French bubbles, all of which you'll find in abundance and the majority of which are poured by the glass. If you have any questions, general manager and grape wizard Miguel Vera is more than happy to uncork enlightening answers. 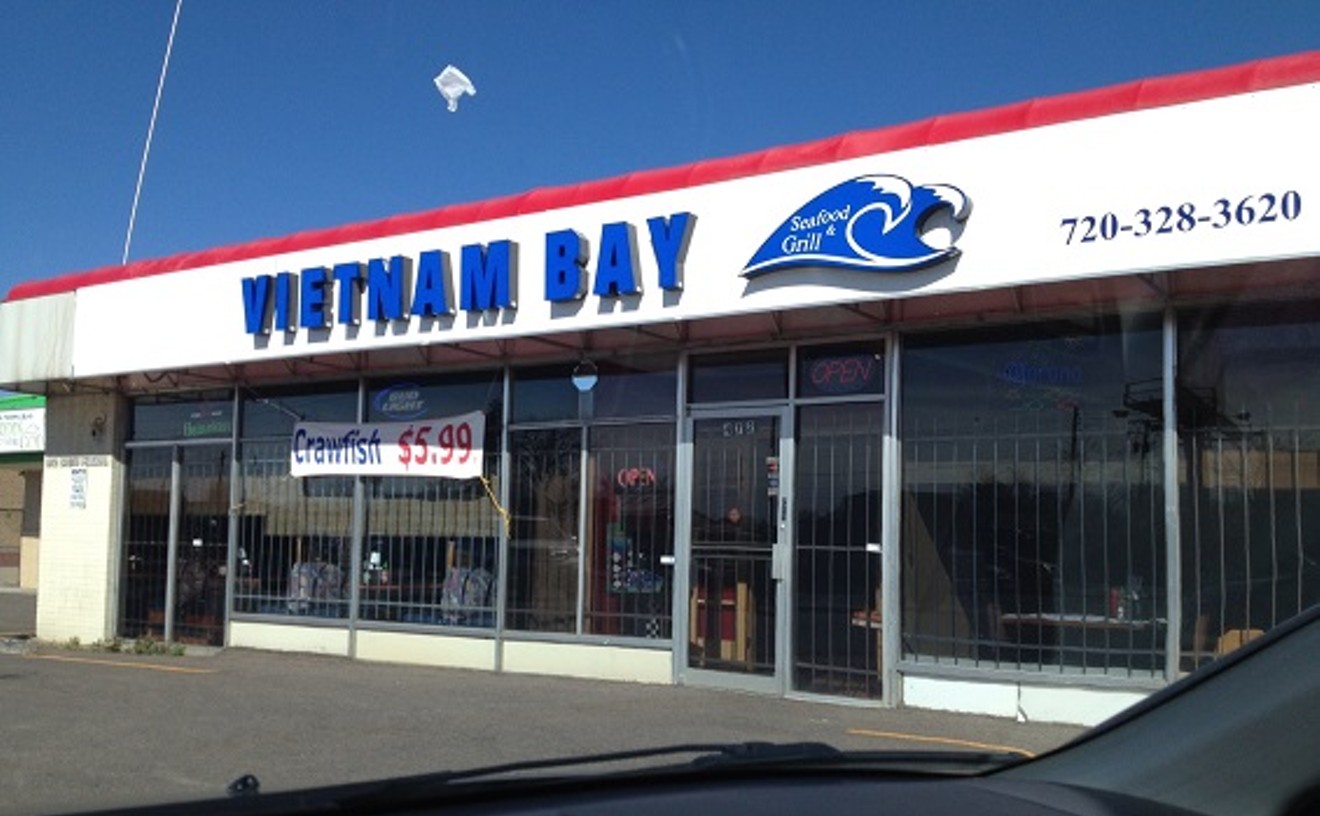 The food at Vietnam Bay presents a collision of Cajun ingredients and Vietnamese specialties. Before you dive elbow-deep into a bag of the freshest crawfish in town, remember that the kitchen also offers chicken wings in a variety of styles. Best is the version with the house fish-sauce glaze, the deep, fermented funk of nuoc mam balanced by soy, sugar, red-chile flakes and a slurry of finely chopped herbs. Although a ramekin of ranch dressing is included on the plate, you won't need it: The tangy tamarind and creeping heat provide all the impact your tongue can handle. 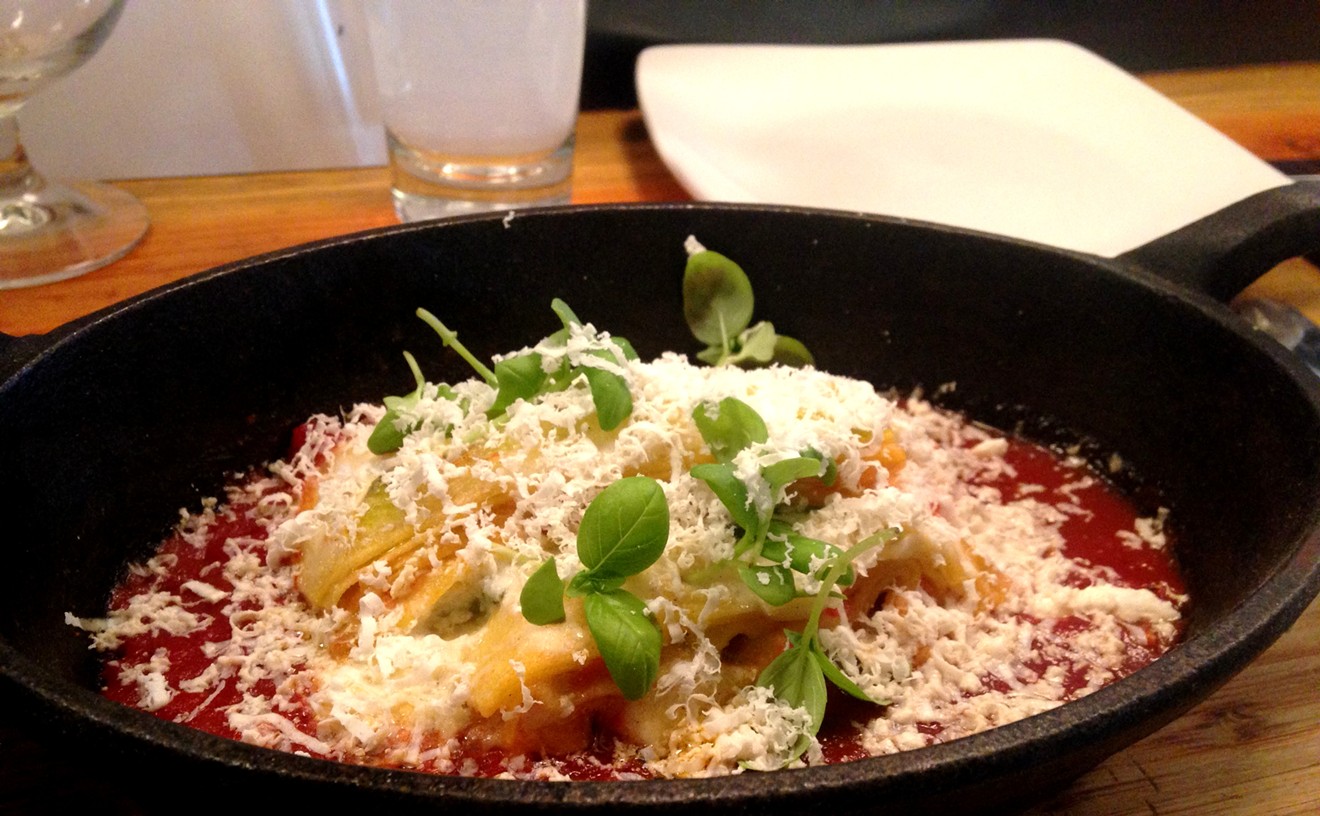 "Basta" translates to "enough" in Italian, and true to the name of the Boulder restaurant that Kelly Whitaker opened in 2010, you can never get enough of the food — whether you order the wood-fired pizzas, roasted vegetables, lasagna or, most notably, the sensational wood-roasted chicken, which flies high above its competition. No one makes the humble bird soar quite like Whitaker, who thumps it with salt and fragrant fresh herbs before compressing it in a Cryovac machine. The chicken is finished off in a wood-fired oven stoked with oak, and the result is exceptionally juicy flesh and an exterior the hue of caramel, with a thin, salty sheet of skin so crisp, you wonder if it might shatter.

Welcome to the Best of Denver 2014, a celebration of everything that we love about this city. Click here to connect to the Food and Drink section, then go to westword.com to view the rest!

Cannes Report: Timothy Spall Gives the Performance of His Career in Mr. Turner

If you’ve ever loved a terrible person, Mike Leigh’s quietly sensational Cannes competition entry, Mr. Turner -- a biopic, of sorts, covering the last 25 years of the life of the great nineteenth-century British painter J.M.W. Turner – is the movie for you. In his seascapes and landscapes, Turner found the perfect visual language for every possible combination of weather atmospherics, from soft swirls of ochre sunlight to the powdery whites and grays of treacherous ocean storms. Human beings don’t figure largely in Turner’s work, particularly in the later years of his career; when they appear at all, they’re often small, blurred figures at the mercy of the sky above and the sea below. You can read that as a lack of interest in human nature, or as a kind of personal humility in the face of the vast range of colors and textures – and, by extension, sounds and smells and feelings – that make up the world around us.

As a person, Turner tended toward eccentricity and solitude. And as played in Mr. Turner by Timothy Spall, he isn’t the sort you’d necessarily want to cuddle up to. Only occasionally does he use actual words to communicate. More often, he makes his feelings known using a vast vocabulary of growls that emerge from the depths of his throat. Presented with a visitor he doesn’t wish to see, Turner makes the sound of a bear snuffling through garbage and finding nothing of worth; admiring the thousands of shades of brown and gray in a piece of driftwood, he’s like a contented pig who has located a particularly tasty truffle in the forest.

Turner appears, especially at first, to care little for human beings except on those rare occasions when he needs them: His housekeeper, Hannah (played, with guarded tenderness, by the British stage and theater actress Dorothy Atkinson), welcomes his gruff sexual advances, even though he treats her thoughtlessly. A mysterious and rather angry woman (Ruth Sheen) appears at his door with her two daughters – who, it turns out, are also his daughters – to show him his first grandchild. He grunts at the little cherub in her white bonnet, wanting nothing to do with her.

But only at first: A few minutes later, he comes around to admire the infant in all her powder-pink glory, albeit in a rather businesslike way. Yet it’s the first moment in Mr. Turner when we realize that maybe we’re not as expert at reading this man’s heart as we think. He’s intractable, uncommunicative, dismissive. But he is also, as Spall and Leigh show us, capable of delicate gradations of emotion. This is less your standard-issue biopic than a foray into the mystery of human feeling.

Mr. Turner, majestic in its stubbornness, may be Leigh’s finest picture, or, at the very least, a picture different from any other he’s made. Leigh, Spall, and cinematographer Dick Pope – who borrows lots of lighting tricks from Vermeer and Ingres and even Turner himself, to glorious effect – have gently atomized Turner’s character, breaking it into small, potent fragments that affect us in ways we don’t see coming. We see how he reserves his affection only for a worthy few: For his father (played, wonderfully, by Paul Jesson), a gregarious man who has somehow failed to pass that quality on to his son; and for a widow he meets late in life, Mrs. Booth (the marvelous Marion Bailey) -- when she first meets the already famous painter, she doesn’t even know who he is, though despite his gruff manner, she takes to him immediately.

Spall has always been a terrific actor, but this is the performance of his career. He’s wholly without vanity: As Turner, he has a chin that doesn’t know where his neck begins; he carries his somewhat portly frame like he's more preoccupied with light than with grace of movement. This Mr. Turner is no one we’d go out of our way to know; he may be historically significant, but he’s anti-charismatic, a walking negative charge. And yet somehow, we come to love a man we don’t even like. As Mrs. Booth says of him, with perceptiveness that has nothing to do with flattery or even with mere kindness, “I believe you to be a man of great spirit and fine feeling.” She’s heard the heartbeat beneath the growl.