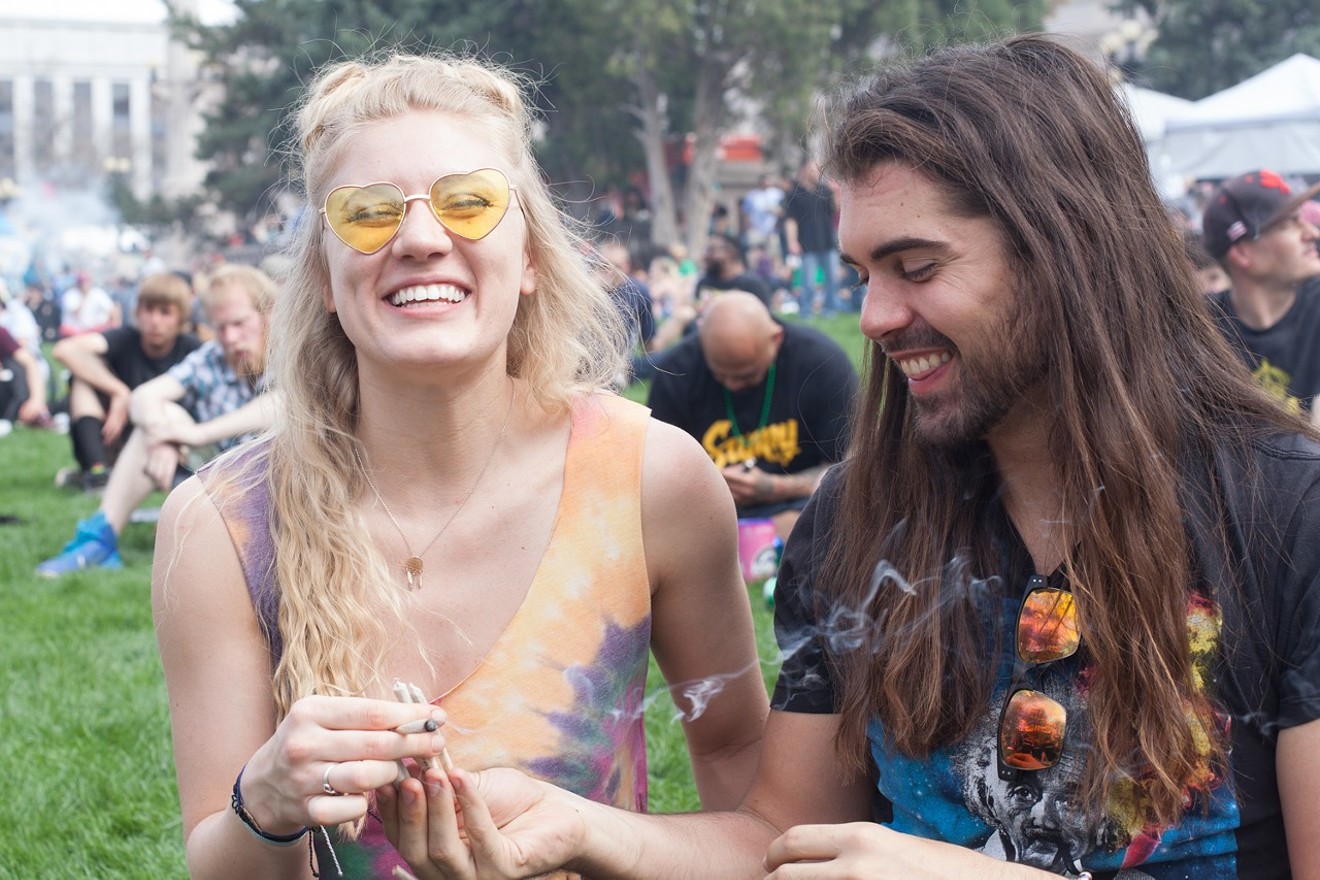 Civic Center Park has long been recognized as Denver's unofficial gathering spot for 4/20. Jacqueline Collins
After a two-year hiatus because of the COVID-19 pandemic, the 4/20 festival at Civic Center Park is returning in 2022.

Euflora has secured a preliminary event permit for Civic Center on Wednesday, April 20, according to Denver Parks & Recreation, and the Denver-based dispensary chain plans to bring back the free festival and concert on the unofficial marijuana holiday.

Although the FlyHi 420 Festival is still working on its performance lineup, organizer Ashley Chubin says that sponsors, vendors and musicians are currently being locked in. Past performers at the 4/20 Fest and the 4/20 Rally that preceded it included 2 Chainz, Jermaine Dupri, Lil Jon, Lil Wayne, the Original Wailers and T.I., among others.

With plans to run later into the night than previous 4/20 celebrations at Civic Center, Chubin says that this festival will serve as a celebratory reunion for Colorado's marijuana community. "We want to go a little bit bigger this year," she explains. "The past two years have been a bummer for everyone, and the 420 Fest really brings happiness out in people."

The 2020 rendition will run from noon to 9 p.m., according to Chubin. Although there will be security and a gated event area, all ages will be allowed to attend the festival. Food trucks, a ticketed VIP section and liquor sales will also be part of the event, she adds.

Marijuana use isn't officially sanctioned or allowed at the event, but that's never stopped thousands of visitors from lighting up at Civic Center in the past. Those who are respectful and mindful of the police presence around the park will be treated as they have been in previous years, Chubin says.

"It's a new consumer purchasing power, and a lot of people don't know delivery is actually a thing out here, so it's been slowly building month to month. The festival is going to be a huge asset for us," she points out.

Long recognized as Denver's unofficial gathering spot for 4/20, Civic Center was hosting marijuana smokeouts and free concerts before recreational pot was legalized in Colorado in late 2012. The event focused on advocacy and politics in the early years, but slowly turned into more of a festival and celebration as Colorado's pot industry has evolved.

Euflora took over the Civic Center event permit for April 20 in 2018, after the previous 4/20 event organizer, the Denver 420 Rally, ran into opposition from the city over operating and cleanup issues following the 2017 event.
KEEP WESTWORD FREE... Since we started Westword, it has been defined as the free, independent voice of Denver, and we'd like to keep it that way. With local media under siege, it's more important than ever for us to rally support behind funding our local journalism. You can help by participating in our "I Support" program, allowing us to keep offering readers access to our incisive coverage of local news, food and culture with no paywalls.
Make a one-time donation today for as little as $1.