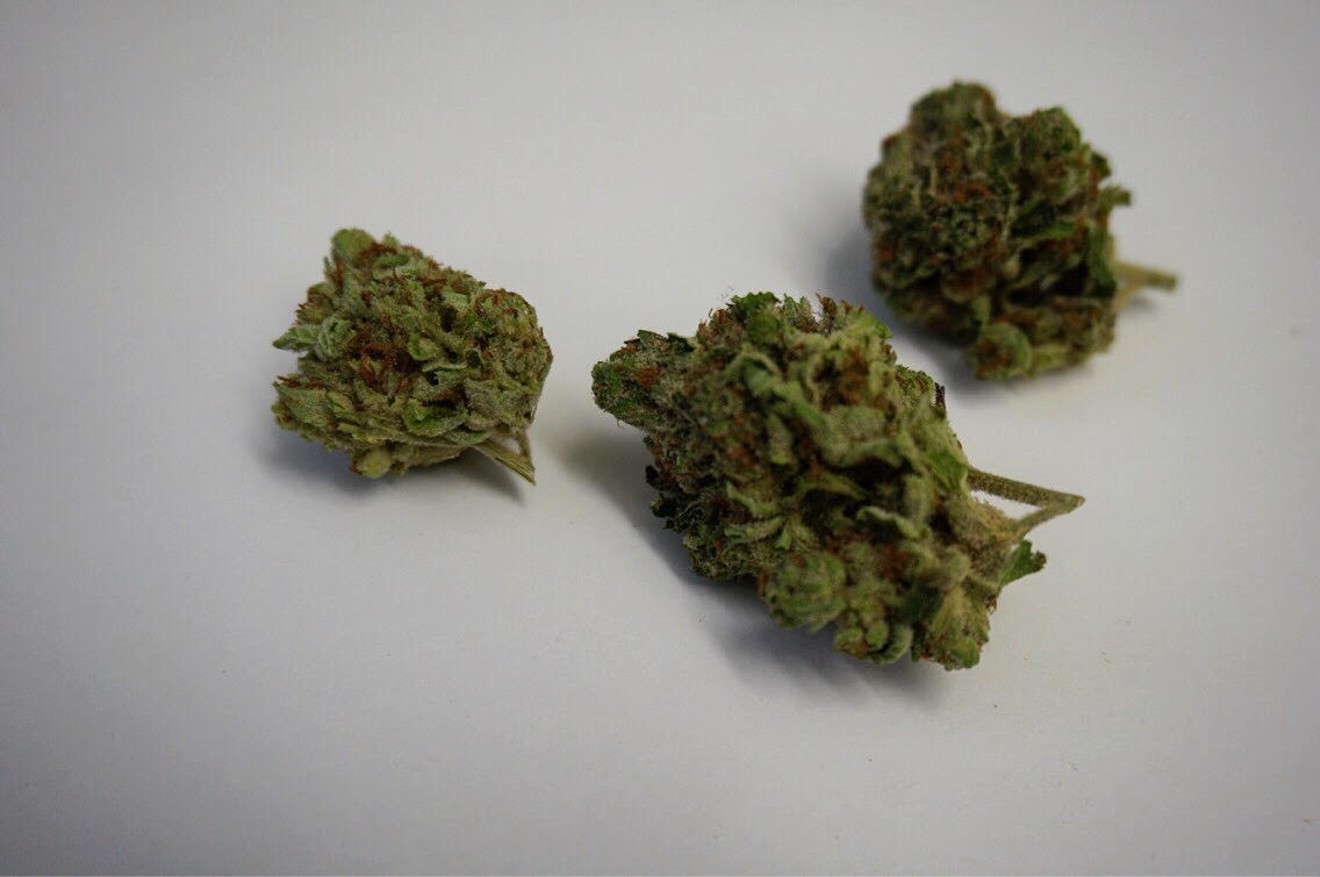 Don't let your guard down around strains that start with "Bubba." Herbert Fuego
If Disney and its horde of lawyers served Colorado cannabis companies with lawsuits and cease-and-desist orders for Star Wars ripoffs, as the Girl Scouts of America and Gorilla Glue did for strains named after their respective brands, nearly every pot menu in Denver would be affected. Skywalker, Skywalker OG, Death Star and Princess Leia are easy to find in dispensaries, with Ewok, Jedi Kush and Boba Fett popping up intermittently as well.

Bubba Fett — named after Boba Fett, a bounty hunter in Star Wars — might be able to sneak by Mickey because of its first name, but the strain is fetching quite the reward across the Mile High galaxy. Born in Boulder’s Green Dream Cannabis cultivation, Bubba Fett is an indica-dominant hybrid with Pre-’98 Bubba Kush and Stardawg genetics. Not to be confused with Boba Fett or Bubba Fett OG, two indica-dominant hybrids with completely different lineages, Bubba Fett is currently a Colorado-only strain.

Although Pre-’98 Bubba is known for its relatively high CBD percentage, Bubba Fett is a THC yielder through and through. It’s routinely one of the highest testers on the shelf at Buddy Boy and Lightshade dispensaries, and like ol’ Bubba, the Fett has extremely sedative effects. Even at night, this strain can be easily overdone, with the motivation to brush your teeth, take the dog out or put leftovers in the fridge all hanging in the balance after a puff or two. Be sure to have your pre-sleep chores done before lighting up, or you’ll wake up in a shameful, slovenly state.

Bubba Fett is sold at a number of chain dispensaries in Denver that use wholesale growers and extractors, such as Buddy Boy, Lightshade and bgood. All are of similar quality, with big, chunky nugs and a diesel- and cheese-heavy flavor profile. But if you’re ever near Boulder, you might as well try it from Green Dream, the shop where it all started.

Looks: Expect large buds with chunky calyxes that like to spread out and foxtail. Everything about the color is bright, with lime-green flowers blotted with occasional light hues of violet and a striking blanket of milky-white trichomes.

Smell: Like its sedative effects, Bubba Fett’s smell is stiff. A potent blend of diesel and dank instantly take over the nostrils, starting with gassy and grassy aromas and finishing with a fruity-skunky-cheesy funk similar to that of Ingrid.

Flavor: A treat for tokers who value complexity, Bubba Fett has a mix of diesel, floral and earthy flavors, with subtle, creamy notes of cheese and berries also present.

Effects: Make no mistake — the strain is an indica, but there’s much more of a cerebral effect to Bubba Fett than there is with Bubba Kush. The first half of the high can be euphoric without becoming disorienting, but couch lock is inevitable no matter the tolerance. Great for medical patients with stronger-than-average pain, sleeping problems or eating afflictions, Bubba Fett provides potent relief both mentally and physically — especially as a concentrate.

Commercial grower's take: “I can only imagine how strong this would be for a new user, because it puts me down fast and hard. Stardawg is a really potent strain from the Chemdawg family – and that’s saying a lot – and most users are familiar with Bubba Kush’s strength. Stardawg likes being inside and needs regular topping, but Bubba is better grown outdoors and can take a while to flower. All of that makes me think it’s not going to be the easiest to grow at home for someone without a lot of experience. I’ve heard the Green Dream people went over a few different phenotypes of [Bubba Fett] before choosing which ones to use as mothers, though, so I’m sure they’ve bred out a lot of those difficulties — or figured out how to deal with them, at least.”