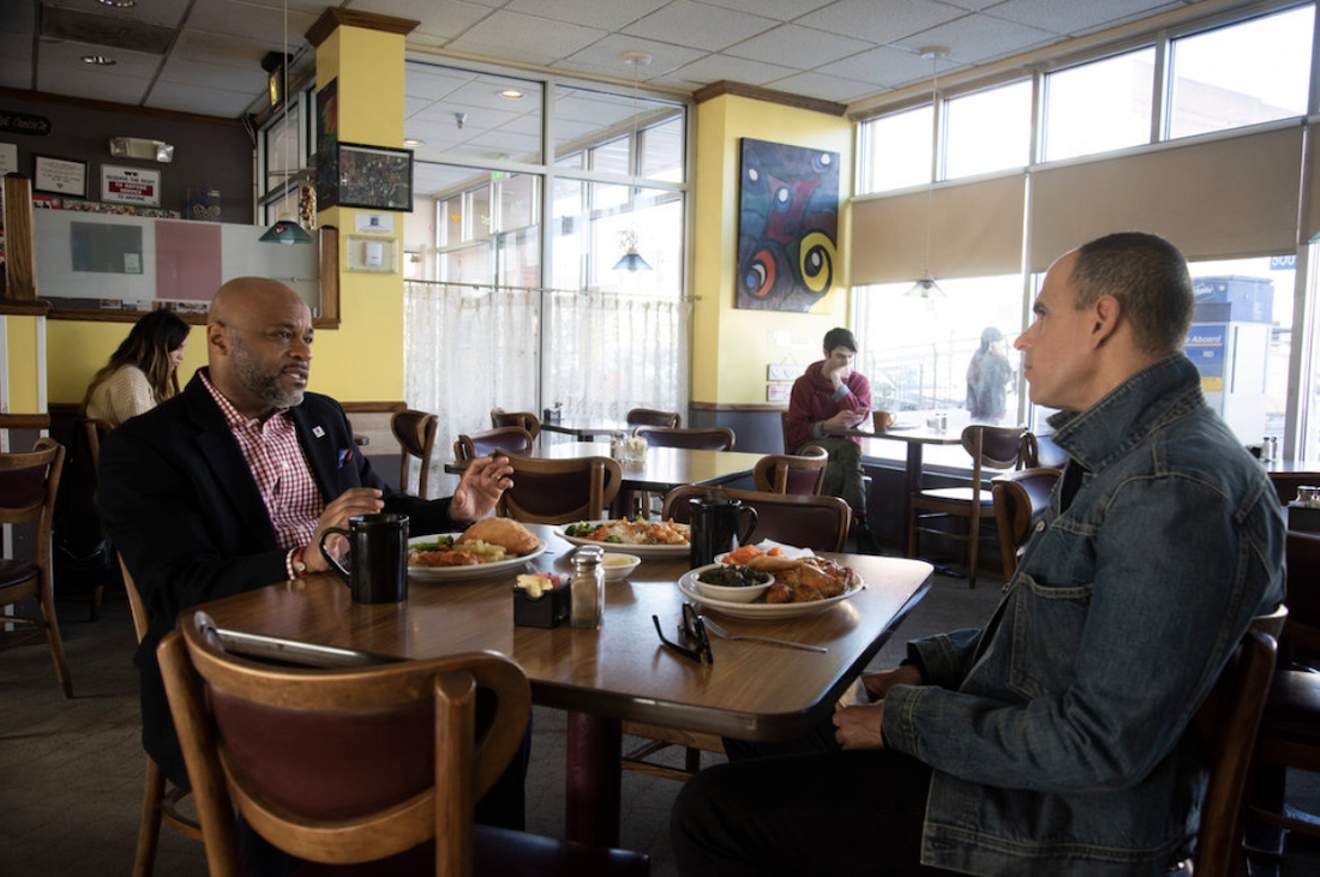 Mayor Michael Hancock shares a meal with CNBC's Marcus Lemonis at the Welton Street Cafe. Thomas Cooper/CNBC
Cable TV, you did it again.

CNBC came to town about a year ago to film Streets of Dreams With Marcus Lemonis, a new TV series that follows the entrepreneur around the country as he learns about iconic streets in America that drive business and culture. The episode about Denver, which debuted January 26, focuses on the local marijuana industry. And, according to Lemonis, what better street to show off Colorado cannabis than South Broadway?

"This is the Green Mile, a two-mile stretch along Denver's South Broadway that's literally putting the 'high' into the 'Mile High City' and leading the way into a multibillion-dollar global cannabis industry," Lemonis says at the beginning of the episode as B-roll footage of Broadway appears. "Welcome to Denver's Green Mile."

Lemonis then visits former Denver Broncos great Terrell Davis and his Denver-based CBD drink company. He also checks in with Wanda James and her dispensary, Simply Pure, as well as the Love's Oven edibles kitchen, Super Farm's commercial marijuana cultivation and a now-closed pot tourism company, My 420 Tours. He even tours Blue Moon creator Keith Villa's marijuana-infused brewery and shares a meal with Mayor Michael Hancock at the Welton Street Cafe. And he visits other spots, too, all respected operations run by folks who've either been in the pot industry for years, carry certain amounts of celebrity, or both.

Along the way, Lemonis broaches social justice and the racial hypocrisies of legalization with James, touches on the economics of commercial growing with Super Farm owner Joshua Haupt, dives into the infused food-and-drink market with Love's Oven and Villa, and hangs out with Davis to learn about CBD's potential in the athletic training industry. He also looks into the confusing laws and regulations surrounding state-legal marijuana — still federally illegal — and CBD products, and visits marijuana banking, security and packaging businesses before meeting with Hancock to grill the mayor on his rocky past with the marijuana industry.

The episode is actually one of the more accurate portrayals of our local trade. So why the need for the Green Mile bullshit?

Before Denver prohibited new dispensaries from opening within 1,000 feet of each other in 2013, eighteen medical marijuana dispensaries were able to pop up along a small stretch of South Broadway. Since then, most of them have opened for recreational sales, and all of them are still there. It's the densest area of retail marijuana in the city, and carries a great name for the premise of a show called "Streets of Dreams." The show's producers just neglected to profile dispensaries along that stretch.

And there are definitely some dispensaries on South Broadway worthy of attention. Solace Meds is operated by former Denver Broncos running back Rod Bernstein and his son, Drick, a basketball star during his time here in high school. Colorado Harvest Company was founded by a schoolteacher who went on to make millions in the pot industry, and Good Chemistry's backstory of medical marijuana and terminal illness within the owner's family inspired one of the better dispensary chains in Denver. (Yes, Cookies is also along the Green Mile, but it didn't open on South Broadway until last November, after filming took place.)

The producers did have other options for the name of the Denver segment. After all, this town is nicknamed the "Mile High City." Our professional basketball team is the Nuggets, which plays at an arena named for the Ball Corporation, the maker of Mason jars — the most popular nug jug of all time. The weed industry is so prevalent here that businesses with the words "green" or "wellness" in them have had to put signs on their doors telling people "THIS IS NOT A DISPENSARY."

This city has an arsenal of pot puns at the ready, and there are other streets — East Colfax, Federal Boulevard and the entire neighborhood of Montbello — that easily could've played host to the show's concept.

When I was in middle school, MTV visited my small hometown to film an episode of Made, documenting an awkward high school kid's wish to become a ladies' man. MTV returned when I was in college, this time filming an episode of Catfish that followed one of my high school classmates who was in a long-term relationship with someone who didn't exist. Both times, the shows made my town seem as if it had a functioning airport (it doesn't), was an opulent riverside community (it's one of the poorest tri-state areas in the country), and had an exciting nightlife. None of it was true, but our town of fewer than 40,000 was too small for anyone outside of it to notice.

Denver's a little bigger than that.
KEEP WESTWORD FREE... Since we started Westword, it has been defined as the free, independent voice of Denver, and we'd like to keep it that way. With local media under siege, it's more important than ever for us to rally support behind funding our local journalism. You can help by participating in our "I Support" program, allowing us to keep offering readers access to our incisive coverage of local news, food and culture with no paywalls.
Make a one-time donation today for as little as $1.