Governor Jared Polis will have to navigate new challenges for Colorado if Congress legalizes cannabis. Kenzie Bruce
click to enlarge 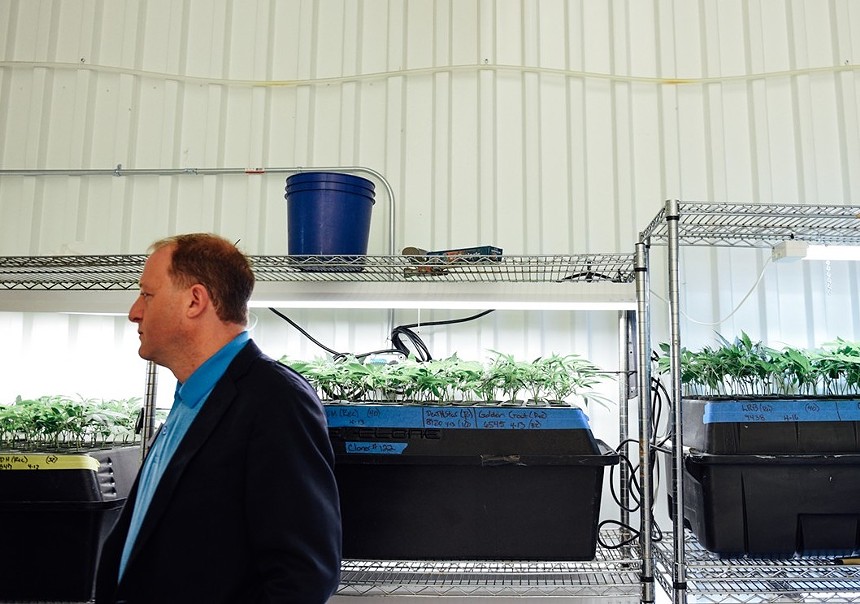 Governor Jared Polis will have to navigate new challenges for Colorado if Congress legalizes cannabis.
Kenzie Bruce
Governor Jared Polis has been a vocal proponent of federal cannabis reform since his days in the U.S. House of Representatives, but he now leads a state with pot laws miles ahead of anything Congress has passed. And all those miles come with occasional forks in the road.

As such notable senators as Cory Booker and Majority Leader Chuck Schumer introduce bills that propose federal legalization, Polis has begun pushing for a more incremental approach. Still supportive of nationwide legalization, he outlined the need for new banking and tax laws for state-legal cannabis businesses in a public letter to Congress on August 27, suggesting that Democrats put attention toward more bipartisan efforts in addition to the comprehensive cannabis packages that Republicans are less likely to support.

In the letter, written in response to Schumer's Cannabis Administration and Opportunity Act, Polis urges senators to consider short-term solutions to cannabis financing problems while still engaging in long-term legalization conversations. However, Polis faces his own cannabis tax issues in Colorado, where a statewide ballot initiative currently suggests raising recreational dispensary sales taxes by 5 percent. And days after sending the letter to Congress, Polis suggested that Colorado eliminate the state income tax in favor of taxing certain polluting activities, including smoking.

Westword recently caught up with the governor to talk about cannabis taxes and congressional pot conversations, as well as to ask whether he plans to include higher cannabis taxes in any proposals eliminating the state income tax.


Westword: Other forms of federal legislation have been introduced for cannabis decriminalization or descheduling over the years. What about the Cannabis Administration and Opportunity Act made you want to write a letter?

Governor Jared Polis: First of all, I'm, for everything and anything that Congress does to decriminalize marijuana, including a comprehensive package with social equity investments. That being said, there are two partial reforms that I think can actually get the sixty votes in the Senate we need. One of them already passed the House in a strong bipartisan vote: the SAFE Banking Act. The other one I highlighted is the 280E fix, [an IRS tax code] that currently prevents a lot of workers in the marijuana industry from getting mortgages on their homes, and their bank accounts are often messed with just because they work in the industry. If we can at least get those two bills done and on President Joe Biden's desk for signing, it'll be good momentum forward as we work on broader federal reform efforts.

Would you prefer a more incremental approach toward legalization?

It's usually the way Congress works. When you count to sixty votes in the Senate, I just don't see how they get there on a comprehensive package. I'm totally for it, and if they can get ten Republicans, they get ten Republicans — but I don't know if they even have every Democrat [on board]. I don't think they do; they just have most of them. On the banking and tax issues, though, I believe they could get the majority needed to actually get those bills done. I think it's good to keep talking about comprehensive reform, and keep fighting and pushing for it, but hopefully these boulders will help start an avalanche, where they start rolling, pass and begin building momentum in future years for more cannabis initiatives.

Colorado Representative Ed Perlmutter has been pushing SAFE Banking for years. As a former representative yourself, how common is it to see a member of Congress push the same legislation for that long — and actually start seeing success, as well?

It's very common. It takes years to get from an idea to reality. The fact that Congressman Perlmutter was able to get the SAFE Banking Act approved in a bipartisan vote by the House and also included in the HEROES Act is really solid momentum. It passed 321 to 103, so that's 91 Republicans joining if every Democrat is voting for it. That's some solid momentum. I think banking is there, and we know the voters are there for banking. The challenge is just getting the Senate committee hearing and the votes.

Members of Congress, including Schumer, have visited Colorado to tour the state's cannabis industry. As an elected official who tours cannabis businesses from time to time, what do you get out of that?

I've visited many, and you hear about it firsthand — things like "We can't even get a bank account," or "My shift manager can't get a mortgage." These are real-life issues that dispensaries and workers face. People are paying too high of a tax rate because they can't deduct normal expenses, which is unfair. Treat these businesses just like other legal businesses from a banking and tax perspective. If we get that done, hopefully that will help ease the pain and make life easier for people who work in the industry.

Whenever people are interested, we absolutely accommodate them. Other governors have called me for my insights, which we've given about our experience, and we're always happy to show what we do. By no means are we saying we're perfect — I think we can do even better — but we certainly are a good model compared to other states.

A lot of the conversations Congress is having about cannabis reform — taxes, social equity, licensing — have already happened in Colorado. How would federal legalization laws impact some of the state-run programs out here, such as the new Cannabis Business Office, or cannabis businesses themselves?

Every state would have help from the SAFE Banking Act, from access to loans, capital and banking relationships, to cutting 280E, which would decrease the tax burden on both workers and businesses in the cannabis industry to help them grow. These are examples of something that will make a real-life difference on the ground for workers and businesses.

You recently came out in support of cutting out Colorado's state income tax and replacing it with a variety of pollution or sin taxes. If there were a future sin tax, would cannabis be included in it?

Well, I think there's one way of looking at this in November: If the 280E bill gets signed, the tax burden marijuana businesses and workers face will go down substantially, so it dwarfs any small change if the state is looking at 3 or 4 percent here, increase or decrease. The 280E reform will decrease the tax burden cannabis businesses face by as much as 30 to 40 percent, because it will allow for all tax deductions and businesses expenses.

In your letter to Congress, you also mention the proposed federal cannabis excise tax in the Cannabis Administration and Opportunity Act, which could reach as high as 25 percent. How do you see that conversation playing out as federal legislation looks for legal cannabis revenue, but states with recreational pot have already levied similar-sized taxes?

It would be more than offset if Congress can pass the 280E, which means there'd be a tax cut in the cannabis industry even if that other proposition passes.
KEEP WESTWORD FREE... Since we started Westword, it has been defined as the free, independent voice of Denver, and we'd like to keep it that way. With local media under siege, it's more important than ever for us to rally support behind funding our local journalism. You can help by participating in our "I Support" program, allowing us to keep offering readers access to our incisive coverage of local news, food and culture with no paywalls.
Make a one-time donation today for as little as $1.