Marijuana Hospitality and Delivery Bills Move On in House 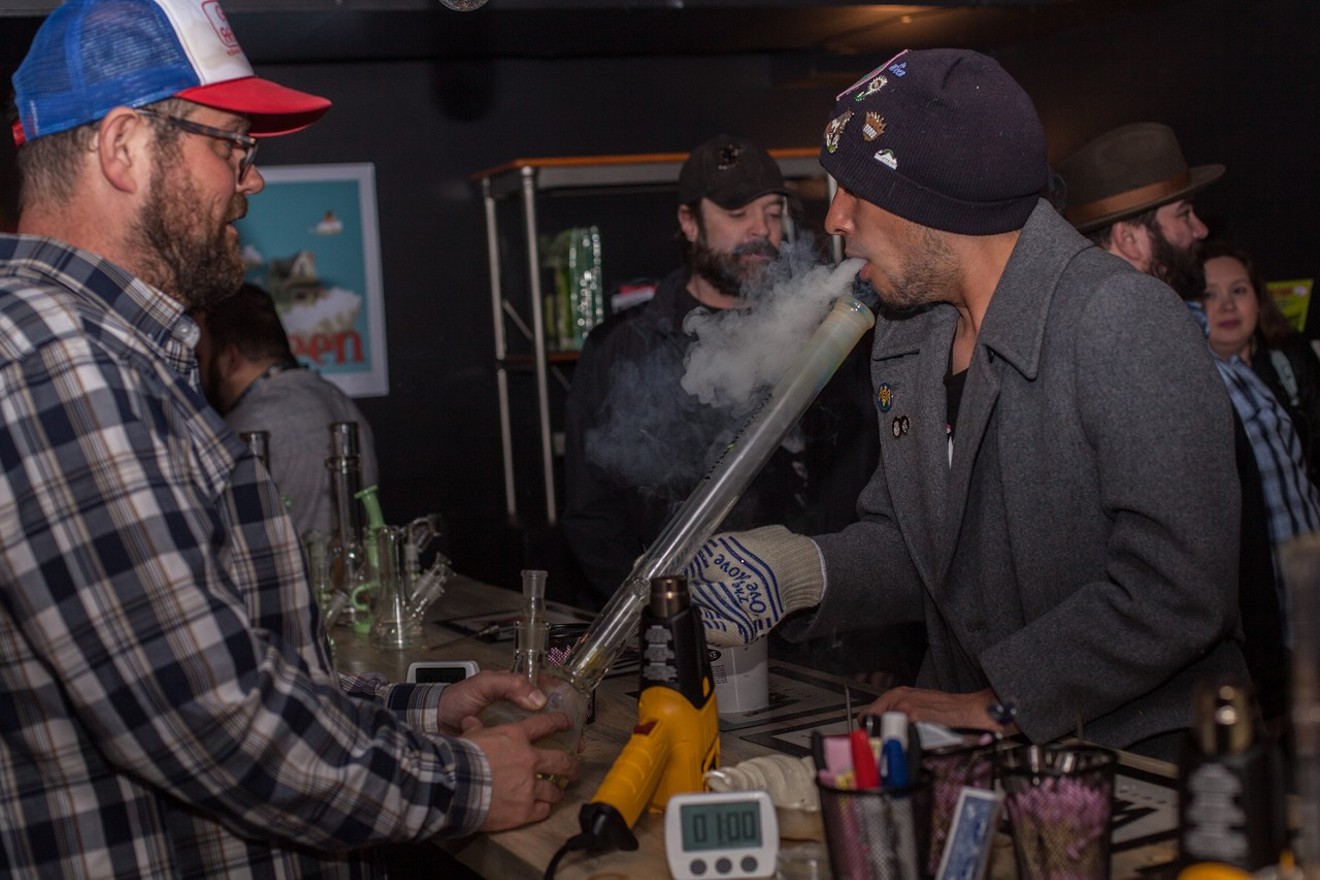 Social marijuana use is still a very gray area in Colorado. Jacqueline Collins
Proposals to legalize both marijuana hospitality establishments and commercial pot delivery moved on in the Colorado Legislature on April 8 — but just barely.

House bills 1230 and 1234 were both approved by the state House Finance Committee, in narrow 6-5 votes, after some significant discussion by lawmakers. Although this round didn't include as much passionate public testimony, committee members drilled down on the potential economic effects.

Marijuana delivery and social use have been the focus of failed bills over the past several years, but Representative Jonathan Singer thinks this could be the year to buck that trend. A prime sponsor of both measures, he believes regulation would curb illegal marijuana delivery services and public pot use.

Hospitality
Singer and Representative Jovan Melton introduced HB 1230 in March. The bill would require the state Marijuana Enforcement Division to create a business licensing system for social marijuana consumption, with towns and counties able to ban such establishments or tailor the rules to their own regulations. If passed, dispensaries could apply for a tasting room similar to those at breweries, while businesses such as hotels, restaurants, music venues and yoga studios could apply for private consumption areas and limited pot sales. Mobile lounges could also be licensed, but could not sell marijuana.

The MED is officially neutral on the bill, according to deputy director Dominique Mendiola. However, she told committee members that if it passed, her department would be able to work with it thanks to the rule-making authority that the MED would have during the new law's implementation.

Not every committee member was pleased, however. Representative Susan Beckman didn't like the idea of mobile cannabis lounges or buses, while Representative Marc Snyder said he thought that allowing new licensees in immediately, without giving current dispensaries a head start, wasn't fair to the current industry.

"You've put a lot of lipstick on it, but it's still a pig for me," he told the bill's sponsors. "There's no preference here for these companies that have been in this for six years. I've long advocated for a lead time for existing marijuana retail businesses."

Despite the close call, HB 1230 has moved on to the House Appropriations Committee; if it passes out of there, it will go to the full House.

Delivery
Also introduced by Singer, HB 1234, regarding commercial pot delivery, would allow dispensaries to deliver medical marijuana only for the first year, with recreational deliveries included in the second. Only residential addresses could receive deliveries, and the MED would implement regulatory and heightened security requirements for drivers. Towns and counties would be able to opt out of allowing deliveries within their borders, as well.

The marijuana industry is somewhat split on the measure. Some dispensary owners think that the bill's language allowing third parties into the delivery space after the first year could hurt small businesses, while others argue that third-party delivery should be included from the start, because mom-and-pop stores can't necessarily afford their own delivery drivers.

Amendments to the bill have curbed some of these concerns, but Snyder reiterated his fears of closing out small businesses. "This is killing me," he said at the hearing. "It just seems to me that this, and 1230 before it, are very thinly disguised attempts to bring big interests out. No one's looking out for the little guys. It's about third-party big business."

Proponents of 1234 say that delivery is more about consumer access. Several military veterans from Veterans for Natural Rights testified about their lack of proximity to dispensaries, which requires them to depend on friends or illegal delivery services to get their medication.

"It is something we need to think about in Colorado. I actually think this makes our streets more safe — I think it's just the way we're going as a state," explained House Finance Committee chair Leslie Herod. "I think there is a black market that we do need to crack down upon, but part of the way to do that is to put this out in the daylight."

Like the hospitality bill, HB 1234 will now go before the House Appropriations Committee.
KEEP WESTWORD FREE... Since we started Westword, it has been defined as the free, independent voice of Denver, and we'd like to keep it that way. With local media under siege, it's more important than ever for us to rally support behind funding our local journalism. You can help by participating in our "I Support" program, allowing us to keep offering readers access to our incisive coverage of local news, food and culture with no paywalls.
Make a one-time donation today for as little as $1.