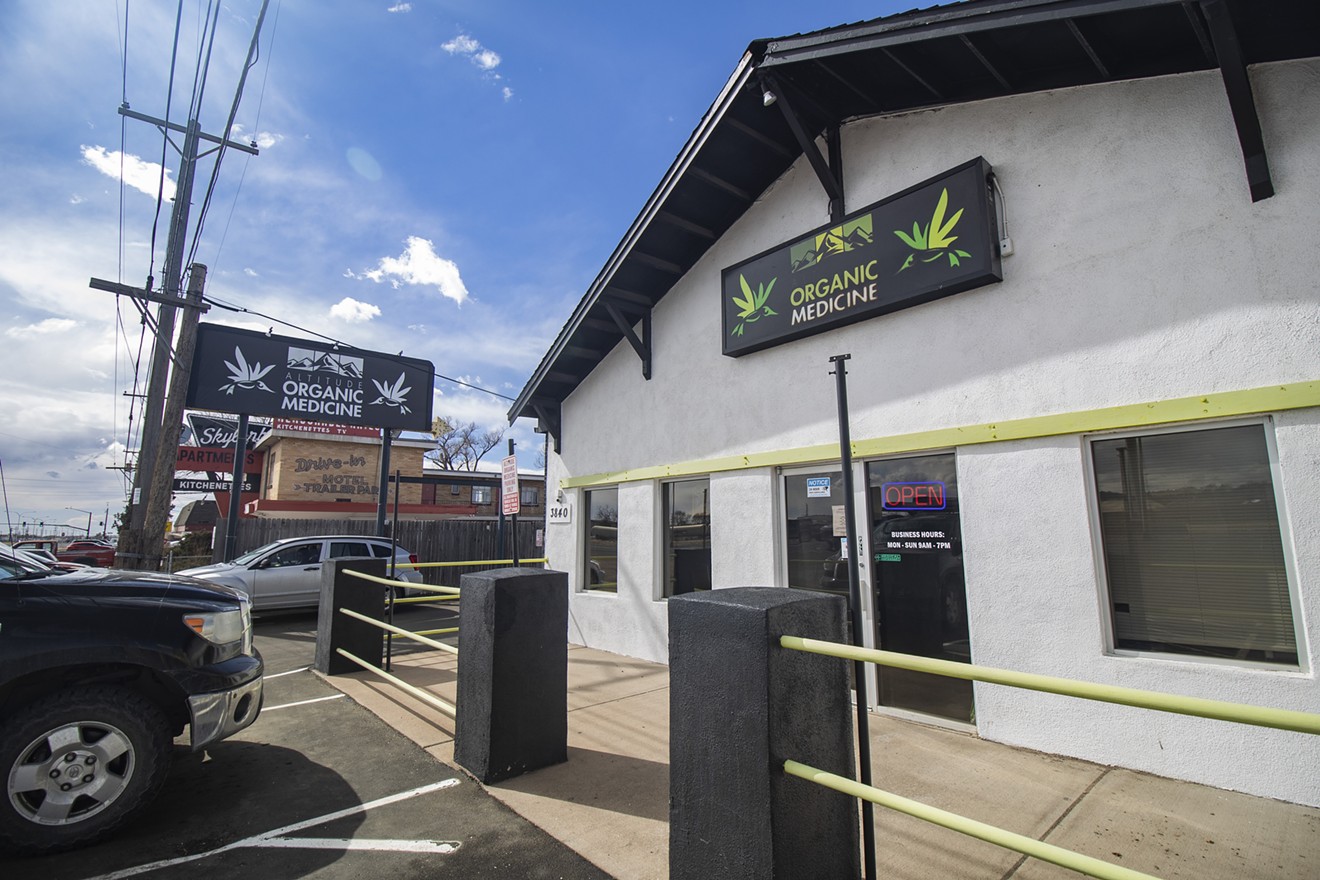 If Colorado Springs voters approve recreational pot sales, over 100 dispensaries could join a new market. Courtesy of Altitude Organic Medicine
Ballots are still being counted in Colorado Springs, but it looks like that city's voters have rejected Question 300, which would have allowed recreational marijuana sales, by a substantial margin.

Colorado's pot industry poured over $1 million into a campaign aimed at allowing medical marijuana dispensaries to offer recreational sales in the state's second-largest city. Before the November 8 vote, leaders of the ballot measure's prime sponsor, Your Choice Colorado Springs, said they were confident in the outcome, pointing to local voter approval of statewide recreational marijuana legalization in 2012.

Even so, the Colorado Springs City Council had voted to ban recreational sales before they began in Colorado in 2014. Medical marijuana was allowed, though, with over 100 medical dispensaries operating in the city.

Your Choice Colorado Springs and local dispensary owners had argued that a 5 percent local sales tax on recreational marijuana would raise around $15 million annually, with the revenue going toward mental health, public safety and veteran's programs. The measure would have allowed the city's existing medical dispensaries to add or transition to recreational sales — a lucrative proposal for marijuana brands in a state experiencing its first sustained downturn in commercial pot sales.

But according to unofficial results from the El Paso County Clerk and Recorder released early this morning, 77,899 Colorado Springs voters rejected the recreational sales proposal, with 58,878 votes in favor. Yet Question 301, which would've created a 5 percent tax on recreational pot sales had voters approved Question 300, passed 71,678 to 64,470.

Marijuana business owners and industry representatives across the state expressed both disappointment and surprise at the loss.

Escape Artists, a marijuana-infused product company based in Denver, had canvased nearly 3,000 homes in Colorado Springs on behalf of Question 300. Brand director Monika Kowalczyk thought the idea of homegrown tax revenue, much of which currently goes to surrounding towns like Manitou Springs that allow recreational sales, would be a compelling argument.

"It did surprise me. We had some team members at the official watch party last night, and it was a somber moment, for sure. We were very bullish and optimistic from our efforts and the efforts of the campaign. Based on the feedback we received from knocking on doors, folks were very receptive," Kowalczyk says.
"To see 300 not pass by quite a large margin was a surprise. It shows we have a lot of work left to do. We know most Colorado Springs residents are supportive of recreational cannabis use. We know that because of the sheer amount of signatures we got to put this on the ballot."

Informal polling done by local news outlet KOAA in 2021 showed that a majority of residents supported recreational dispensaries in the city, but Colorado Springs Mayor John Suthers has been a steadfast and vocal opponent of commercial marijuana. Upon hearing the results, Suthers told the Colorado Springs Gazette that he was "very proud" of voters and that they were "very discerning."

Colorado Springs wasn't the only Colorado city voting on whether to allow recreational sales. Cripple Creek and Palmer Lake, which are both near Colorado Springs, approved recreational pot sales measures, as did Hotchkiss, while Dove Creek rejected allowing marijuana businesses in their towns. A ballot measure in Grand Lake that would permit commercial marijuana business is currently ahead by 2 votes, according to unofficial results.
KEEP WESTWORD FREE... Since we started Westword, it has been defined as the free, independent voice of Denver, and we'd like to keep it that way. With local media under siege, it's more important than ever for us to rally support behind funding our local journalism. You can help by participating in our "I Support" program, allowing us to keep offering readers access to our incisive coverage of local news, food and culture with no paywalls.
Make a one-time donation today for as little as $1.