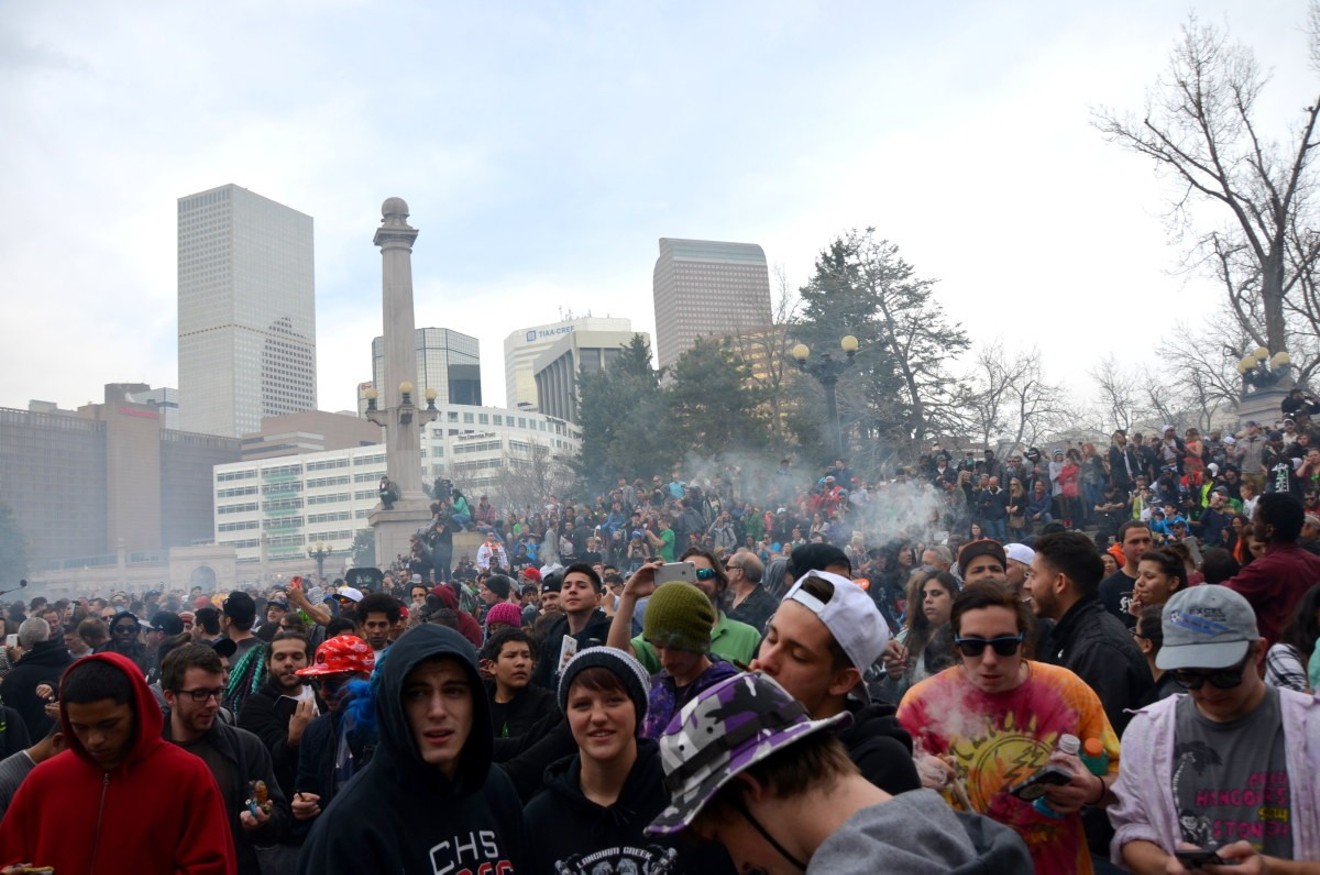 Controversy continues over Denver's April 20 event. Lindsey Bartlett
Michael Ortiz, who last week snagged the permit for a 4/20 event at Civic Center Park in April 2018, has had his attorney send a cease-and-desist letter to the owner of the Euflora dispensary chain.

Euflora, which had employees camp outside the Wellington E. Webb Municipal Office Building starting October 25, has been vocal about its concern that city employees gave Ortiz a chance to be first in line when permit applications were first accepted, on November 21. But Ortiz's attorney, Rob Corry, says his client got the permit in a fair competition.

In the letter that Corry sent to Logan Goolsby of JS Investments LLC, the investment firm that owns Euflora, Corry claims that Euflora employees have been "falsely defaming and maliciously disparaging" his client since Ortiz received the permit. The letter demands that the dispensary chain cease making "any further false statements" about Ortiz, take down any social-media postings about Ortiz, and issue a written apology and retraction of the allegedly false statements.

Michael Ortiz, the new permit holder for a 4/20 event at Civic Center Park.
Facebook
"My client and I had seen Euflora making these statements publicly that implied he did something improper or illegal to get the permit Denver awarded him. That's patently false," Corry says. "My client was there first, and he's entitled to the permit; these comments from Euflora harm my client's ability to put on a solid, first-rate event — that's our concern."

Corry, who also represents former Denver 420 Rally permit-holders Miguel Lopez and Santino Walter, focuses much of the letter on comments from Euflora marketing director Bobby Reginelli, who announced Euflora's campout strategy in October and was at the Webb building at 12:01 a.m. on November 21 to wait for the doors to open so that Euflora could be first to apply for the event permit. Reginelli told 9News that a security guard told his team they could only wait at one door that night, the Court Street entrance, and not the Colfax entrance that Ortiz used to get inside the building at 7 a.m. that day. He beat the Euflora team by seconds.

Although Corry's demand for a written apology had a deadline of 5 p.m. Friday, December 1, Regenilli says he hadn't even seen the letter by that date, and adds that he doubts anyone else with Euflora had seen it, either. Reginelli declined to comment further until he spoke with his lawyer.

Bobby Reginelli announced Euflora's intent to take the event permit in October.
Thomas Mitchell
The fight over the event permit stretches back to the 2017 420 Rally, which drew public backlash after photos and reports of long security lines, broken fences and overflowing trash cans surfaced shortly after the rally ended. The Denver Department of Parks and Recreation then cited organizers for violations that would ban them for reapplying for a permit for three years.

After a hearing officer upheld the decision last month, Lopez threatened legal action; Corry says he's still considering filing a temporary restraining order against the City of Denver because the rally permit was issued to someone else. But since that someone wound up being Ortiz, Corry's client and an associate of Lopez's, the two are "likely" going to come to "some kind of arrangement" for the event's name, Corry says.

The actual permit for use of Civic Center Park on April 20, 2018, won't be issued until around ten days before the event is scheduled to take place, according to Denver Parks and Recreation.

Michael Roberts contributed to this report.