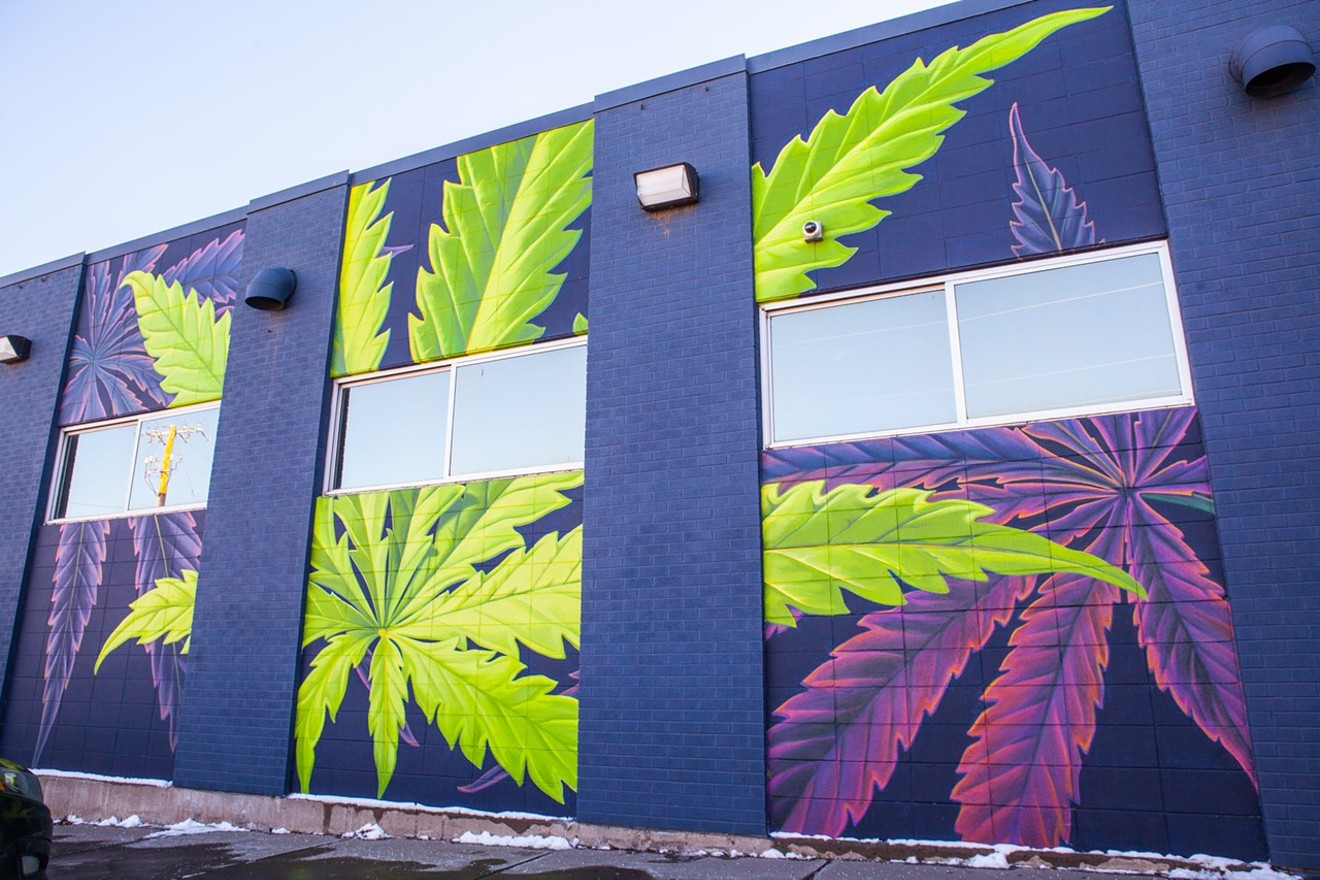 Rocky Mountain High dispensary in Stapleton. Jacqueline Collins
Denver City Council is considering the city's biggest overhaul of marijuana regulations since the plant was legalized commercially in the state in 2012, and there's a chance it could all go through on April 20, the date of America's unofficial pot holiday.

During the April 12 council meeting, bills proposing that Denver opt into marijuana delivery, hospitality and socially equitable licensing were all moved forward after their first hearings. The proposed ordinances, submitted by the city Department of Excise and Licenses after nearly two years of stakeholder meetings, would also allow permanent to-go windows at dispensaries — a temporary business adjustment during the COVID-19 pandemic — and make numerous other technical changes in city rules, as well.

If approved during a vote of the full council on April 19, the measures could be signed by Mayor Michael Hancock the next day. A combination of Black Friday, Christmas and St. Patrick's Day for cannabis consumers, 4/20 has been celebrated with a boisterous bash during non-pandemic years, with upwards of 50,000 people descending upon Civic Center Park. That park was closed last year, and no one has filed for a permit for Civic Center for April 20, 2021.

And Excise and Licenses swears the timing of the bills finally going before council is a coincidence.

"If city council votes on this April 19, the mayor would likely sign the most massive changes to marijuana rules and regulations in Denver since legalization on 4/20. That was purely accidental and not intentional. I can’t say for sure the mayor would sign the legislation that day, but typically he signs legislation the day after city council passes it," says Excise and Licenses spokesman Eric Escudero.

The Colorado Legislature passed bills legalizing marijuana delivery and hospitality services at the state level in 2019, but under those laws, municipalities must opt in. Denver, the first major city in the country with recreational dispensaries — one so proud of its marijuana rules that it holds yearly Marijuana Management Symposiums to teach other government leaders about pot regulation — has taken its time addressing these two growing areas of commercial marijuana, while Aurora, Longmont, Boulder and Superior have already approved programs.

If council approves the delivery proposal, Denver would permit both medical and recreational deliveries within city limits, following most of the rules set forth by the state Marijuana Enforcement Division. Delivery would be cut off at the local dispensary closing time of 10 p.m., orders could only be delivered at residential addresses, and those placing the order would have to show their IDs to the delivery driver. Deliveries would be limited to 1 ounce of flower, 8 grams of concentrate, or edibles containing 800 milligrams of THC.

Denver already has a hospitality program in place that allows qualified businesses to apply for social pot-use permits. That program, established in 2017, only has one current licensee, however, and is more restrictive than the state's version. If approved, the city's new hospitality program would allow more types of businesses to apply for licenses, and would provide for indoor smoking and even micro-sales and mobile lounges — but the 1,000-foot buffer between a social-use business and any daycare center, drug treatment center and city-owned park, pool or recreation would remain in place.

Marijuana-industry representatives and advocates have argued against the buffer, suggesting it be changed to 500 feet or that the requirements for daycare centers be removed altogether. However, Excise and Licenses and, more important, Mayor Michael Hancock are in favor of the restrictions.

Another proposed stipulation would require that all new marijuana business licenses in Denver outside of testing laboratories be reserved until 2027 for owners who qualify for a new social equity designation.

The social equity definition, which was adopted by the legislature at the end of the 2020 session, stipulates that a qualified applicant must be a state resident who has been arrested for or convicted of a drug offense, was subject to civil asset forfeiture related to a drug investigation, or lived in a designated zone of low economic opportunity or high crime; anyone with a family member who has been subject to drug-related offenses would also be eligible, too.

"This ordinance is not only a big step in the Denver and the Colorado cannabis landscape, it has historical and national implications," says the Black Cannabis Equity Initiative. "If this Denver ordinance is approved, it will demonstrate the city's commitment to correct a wrong and a 'societal ill.'"

Governor Jared Polis signed a law in March establishing a $4 million fund for social equity efforts in the state's marijuana industry. The money will be distributed by the state Office of Economic Development and International Trade, and go toward low-interest loans, grants and technical assistance for social equity licensees.

If the proposals are approved by council on April 19 and signed by Hancock, the new programs probably wouldn't be implemented until July, but some delivery and hospitality businesses have already been licensed by the MED in anticipation of Denver making the move.
KEEP WESTWORD FREE... Since we started Westword, it has been defined as the free, independent voice of Denver, and we'd like to keep it that way. With local media under siege, it's more important than ever for us to rally support behind funding our local journalism. You can help by participating in our "I Support" program, allowing us to keep offering readers access to our incisive coverage of local news, food and culture with no paywalls.
Make a one-time donation today for as little as $1.