Jacqueline Collins
The head of a Denver City Council task force evaluating the success of the city's social cannabis consumption initiative doesn't think many of her task force's recommended changes will be approved.

Councilwoman Kendra Black has been leading a committee of local entrepreneurs, public officials and cannabis industry representatives for over six months as they consider the successes and failures of Initiative 300, Denver's social pot consumption licensing system that was approved by voters in November 2016.

The task force recently released recommended changes to how the city handles social consumption licenses. Black doesn't think many of its points will be seriously considered by council, however. "I'll present it to the [Denver City Council Marijuana Committee], and we can talk about it, but I don't think there will be a lot of support," she explains. "I think there are a lot of councilmembers who are very cautious of marijuana."

Black's task force met throughout the summer to determine why only two businesses have received approval from the Denver Department of Excise and Licenses since it began accepting social consumption applications in summer 2017. The committee's final report, released in September, called for an ease on location restrictions that were added by the city after voters approved the initiative, as well as other prohibitions that make it difficult to come up with a profitable business plan. For example, thanks to state regulations, social-use establishments cannot allow smoking or sell cannabis or alcohol; they can only provide a space for vaporizing cannabis or eating edibles.

Several state agencies recently came out against some of those recommendations. The Colorado departments of revenue, public safety, public health and environment, transportation and human services sent a collective letter to Denver City Council on Monday, October 15, criticizing several points in the task force's final report. The letter specifically calls out the report's request for exemptions from the Colorado Clean Indoor Air Act for pot-smoking, as well as the report asking whether the State of Colorado should reconsider a rule banning cannabis-consumption businesses from having liquor licenses. 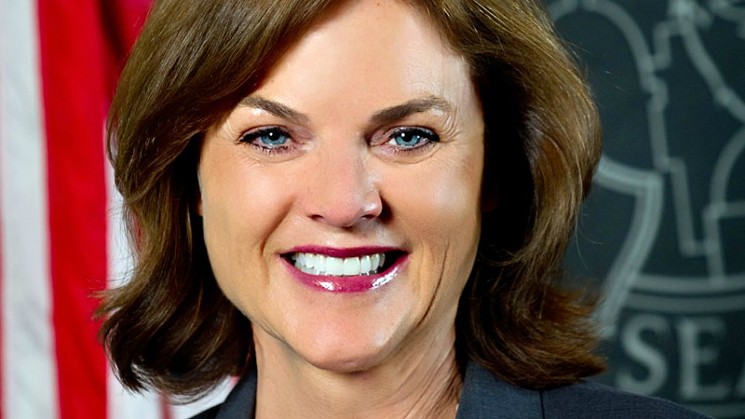 Denver City Councilwoman Kendra Black.
denvergov.org
"This administration is concerned that allowing marijuana and alcohol in licensed premises will result in an increase in impaired roadway users," the letter reads. "The Retail Marijuana Public Health Advisory Committee found substantial evidence that the combined use of marijuana and alcohol increases impairment and motor vehicle crash risk more than use of either substance alone."

Black says she hadn't heard from any of the state agencies before their letter arrived at Denver City Council, but she wasn't surprised. "It's pretty much what I would've expected from the State," she says. "They didn't comment on a lot of other parts of it, [like] distance requirements and those issues."

Did the letter change any of her opinions on the report? Black's response is a simple "No."

The councilwoman will present her report to the Denver City Council Marijuana Committee at its next meeting on November 19, but says the city still has a long way to go to figure out how social consumption will work.

"The intent of the law was to solve the problem of people smoking marijuana outside, and we haven't solved that problem. This ballot measure that passed and the law isn't solving the problem, so I hope we and the community can come together to find a solution," Black says. "We need to find a solution to this problem. [I-300] might not be it, but we need to work with it."
KEEP WESTWORD FREE... Since we started Westword, it has been defined as the free, independent voice of Denver, and we'd like to keep it that way. With local media under siege, it's more important than ever for us to rally support behind funding our local journalism. You can help by participating in our "I Support" program, allowing us to keep offering readers access to our incisive coverage of local news, food and culture with no paywalls.
Make a one-time donation today for as little as $1.