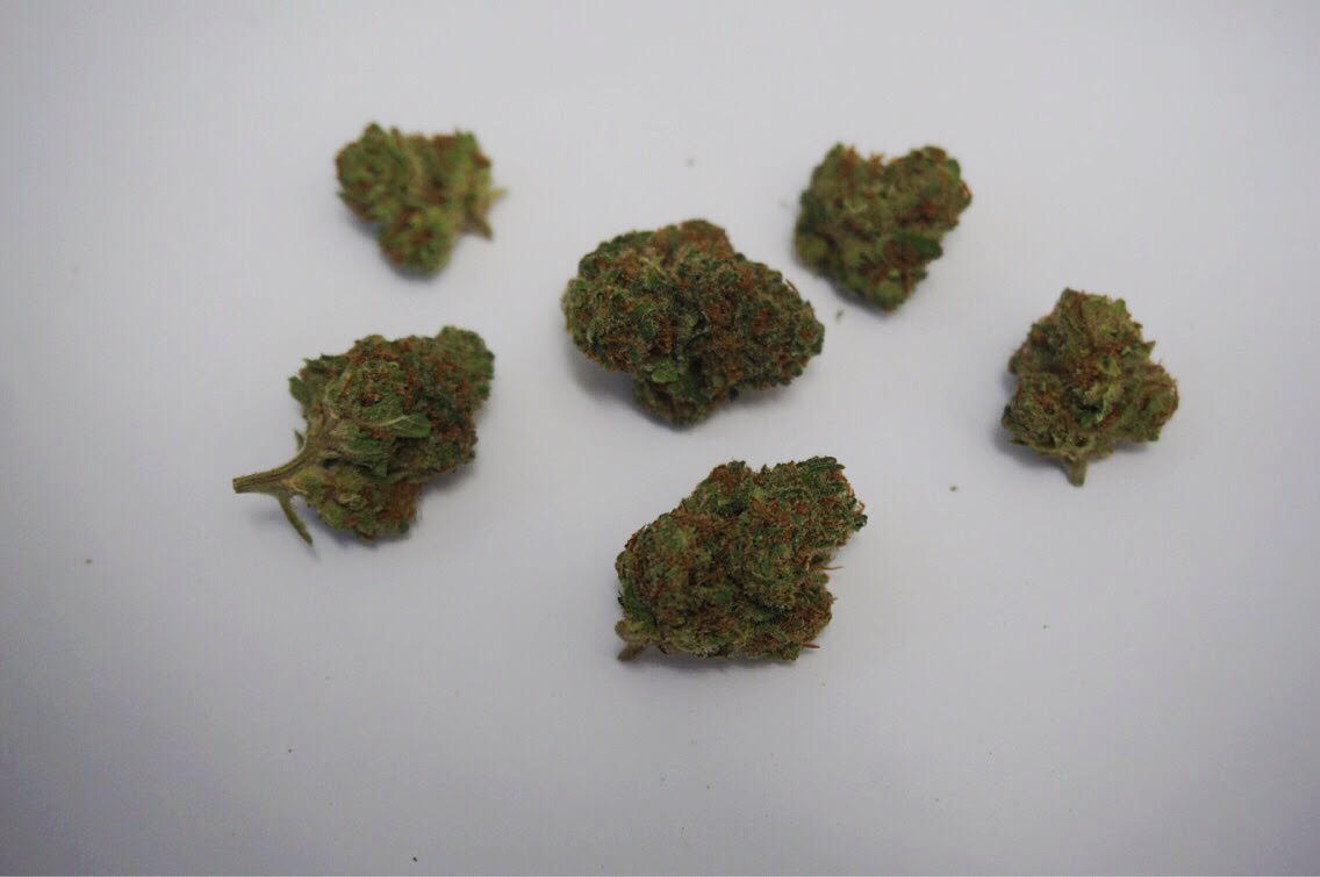 Harlequin's medical benefits are no laughing matter. Herbert Fuego
A reader recently pointed out the lack of high-CBD strain reviews in this column, and she was right. There’s no excuse, folks: I had CBD bias, and I’m ashamed of it. I’m currently free of any real anxiety, inflammation or muscle pains, so the thought of buying a CBD strain had never really crossed my mind. After getting called out, though, my eyes focused on a jar of Harlequin during a recent trip to the Health Center Uptown.

Harlequin is an easy CBD strain to find around Denver. Its sativa-leaning tendencies and consistent CBD-to-THC ratios make it popular for medical patients and low-tolerance users alike. While many tokers assume that any CBD product will make them sleepy, Harlequin has become popular for daytime use. The strain’s genetics are dominated by sativas from Colombia, Switzerland and Thailand, and the burst of energy it gives is noticeable but not overpowering. Harlequin’s lineage also includes a landrace Nepali indica, which is likely responsible for the high CBD content, as landrace indicas are known to have relatively large amounts of the cannabinoid.

I’ll admit that it took me a few sessions to learn how to properly dose myself and manage expectations with Harlequin, but it soon became quite serviceable. Two bowls in the morning helped ease an upset stomach and any slight neck pain without getting me anywhere near stoned, and mixing it 50/50 with Durban Poison — a delicious sativa that can get too racy at times — provided the perfect balance for any paranoia or lack of focus brought on by the Durban’s THC potency.

Looks: Harlequin buds are usually dense, round and colored in a rich forest green, with vibrant rusty-orange pistils and speckled amber trichomes that look like ants and fireflies moving among the trees.

Smell: Strong wood and soil scents dominate at first, with subtle, sweet and creamy notes of vanilla that teeter on the edge of chalky rounding things out.

Flavor: Much like its smell, Harlequin’s flavor is dominated by woody, earthy tastes, followed up by a faint sweetness on the side of the tongue.

Effects: Although it’s a CBD strain, Harlequin packs quite the sativa uplift, known for melting away pain and anxiety while easing stress and fatigue. The strain is much more popular for medical use than recreational, but its relaxing yet invigorating effects are a favorite for the productive smoker. Just remember to keep a water bottle with you: The cottonmouth is strong in this one.

Commercial grower’s take: “I’ve heard it’s a little too humid up here in Colorado for Harlequin, but I doubt anyone with a properly secured indoor grow has problems with that. Not the most popular on the street because of low THC levels. Most of the people growing this at home are either doing it for themselves or other medical patients. Hearty strain, though — good choice for beginners.”

Home grower’s take: “Harlequin is pretty popular commercially because it’s one of the easier, higher-yielding CBD strains to grow. It’s also got a little THC, but not too much, so people looking for more medication without totally abandoning the high tend to like it. It being a sativa doesn’t hurt, either. I think most people associate CBD with sleep, so when they find out they can try this without getting groggy, it’s a big selling point. Usually ready for harvest within sixty days, too, so I wouldn’t be surprised if its clones sell well.”