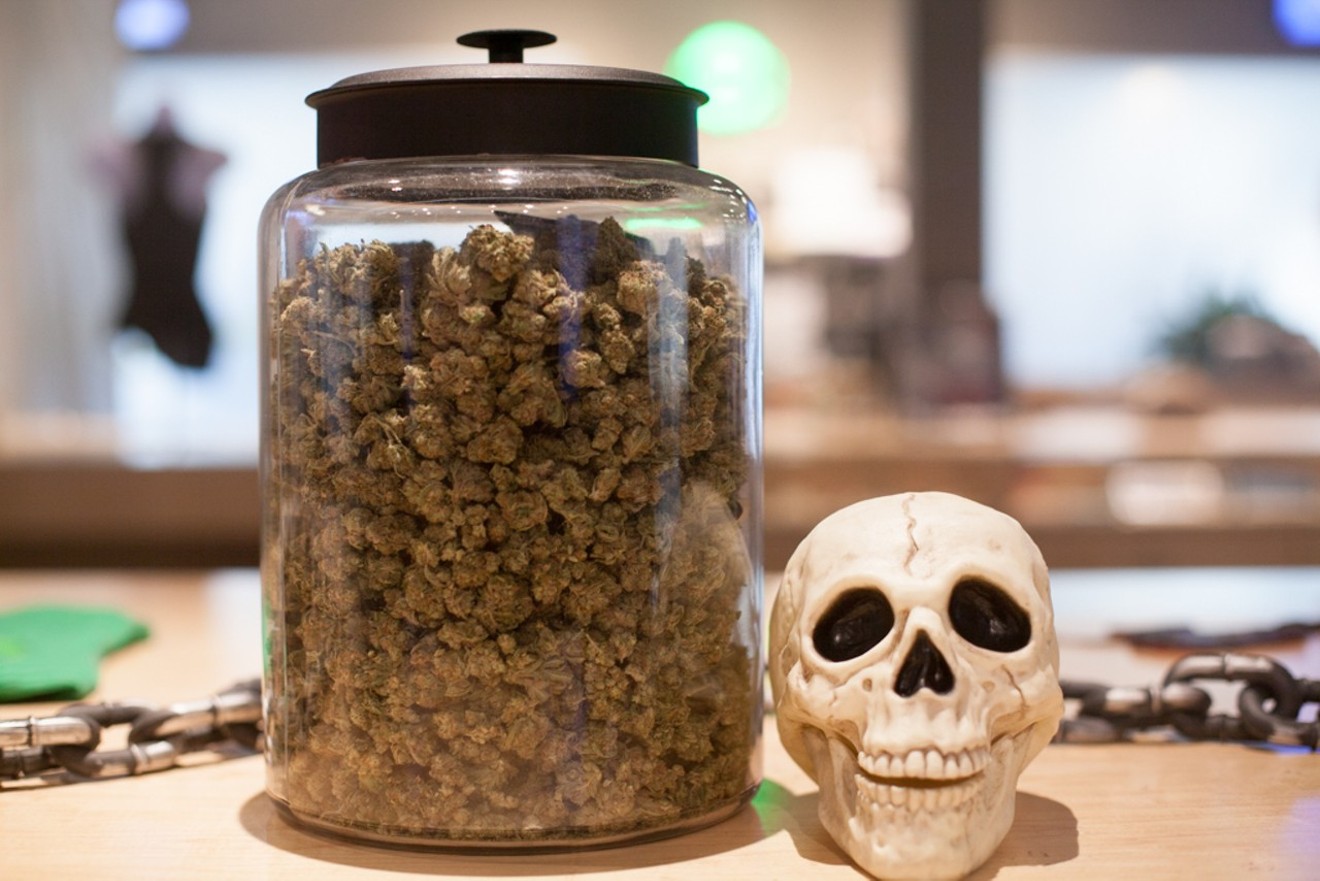 Jacqueline Collins
What do old Count Chocula commercials, bite-sized candy bars and cheesy horror movies have in common? You guessed it: They're all better with weed involved.

In all seriousness, cannabis and the horror genre have an interesting relationship that's developed over the last several decades. As early as the '70s, cannabis users were portrayed as bumbling fools, usually impaled or beheaded as they wandered off alone. They provided a few dumb jokes, never got laid and rarely presented a challenge to bad guys. That's kind of unfair when you think about it: For most of us, the only way we can watch Freddy, Jason or Michael is if weed is involved.

The plant's relationship with scary movies goes deeper than that, though. Like the rest of mainstream media, horror movies are starting to come around on cannabis use or, at the very least, treating the sinners who indulge in it the same way they do their beer-chugging friends.

To learn more about mixing cannabis and horror, we caught up with Timothy Schultz, director of the Mile High Horror Film Festival, before the virtual film fest begins October 7.

Westword: Do you feel like getting high affects the way we enjoy or perceive a good scare? How about scary movies, specifically?

Timothy Schultz: Yes! I think a lot of cannabis users would agree that it can heighten senses. This can definitely change the way you experience a movie, especially from the horror genre. There are a lot of over-the-top moments in horror films. Whether it’s scary, funny or psychologically mind-blowing, those feelings can be intensified.

Is there a certain type of horror movie for you that went best with cannabis use? Sci-fi? Slasher? Creature feature? Something else?

This depends on who you ask, but I think slashers are tough to beat. Films with a strong score are also favorites amongst cannabis users.

Are we still killing off sinful teens in horror movies? Who usually goes out first in the average '80s or '90s horror flick, the stoner or the teens having sex?

Ha! This is an important topic of debate. Fewer sinful teens are getting the axe, but it does still happen. One of the craziest stoner deaths I’ve seen comes from Leprechaun: Back 2 Tha Hood, where someone gets brutally impaled by their own bong. I think the peak of stoner deaths was in 1980s slasher films, although it still happens from time-to-time. As for who goes out first, the stoner vs. the teens having sex: it depends on the film, but I think the stoner has a slightly higher chance for survival. The odds are not good if you’re smoking weed or having sex in an '80s horror movie, though.

Have we seen the portrayal of cannabis use evolve in the horror genre as society accepts the plant more, or is it still stoner-loners who go out before the third act?

It has definitely evolved over time. It used to be much more taboo to use cannabis, and that was reflected in film. It’s legal now in many places. The stoners used to frequently get slaughtered; now, I see them surviving until the end and even overcoming the antagonist.

What are you excited to see at this year's Mile High Horror Film Festival? What can viewers expect?

This year, there are several new indie horror movies that I’m excited about, such as the zombie feature film, Brain Freeze. We’re also featuring seven shorts programs! We pride ourselves on showing the best new horror shorts from around the world. What’s special about a film festival is that these are films you can’t see anywhere else; it’s a chance to see them before the general public.

What's your Halloween movie lineup look like? What do you need to watch every year?

Well, for myself, I’m a huge fan of The Shining. We’ve hosted the actors who played the twins and the bartender from that movie. It has so many ties to Colorado; it’s a must-watch. Stanley Kubrick is a genius. Outside of that, there are mainstream films I’m super-excited about this October, such as Last Night in SoHo and Halloween Kills. This is in addition to what we’re playing at the Mile High Horror Film Festival, of course!

In honor of all this '80s horror talk, what is your favorite "cheesy" horror movie?

Oh, [the 1988 classic] Killer Clowns From Outer Space.
KEEP WESTWORD FREE... Since we started Westword, it has been defined as the free, independent voice of Denver, and we'd like to keep it that way. With local media under siege, it's more important than ever for us to rally support behind funding our local journalism. You can help by participating in our "I Support" program, allowing us to keep offering readers access to our incisive coverage of local news, food and culture with no paywalls.
Make a one-time donation today for as little as $1.