Mushrooms on display at the Colorado Psychedelic Convergence in 2022. Chris Walker
In light of Colorado's recent decriminalization and legalization of certain psychedelics, the Denver District Attorney has dismissed felony drug charges against two men for producing and distributing psilocybin during religious ceremonies.

Rabbi Benjamin Gorelick founded Sacred Tribe, an underground synagogue in Denver that incorporated psilocybin into certain spiritual ceremonies. Gorelick's warehouse was raided by Denver police in January, and he and a Sacred Tribe chemist were eventually arrested and charged with possession with intent to manufacture or distribute a controlled substance, a first-degree felony, by the Denver DA. But then in November, Colorado voters approved Proposition 122, a statewide initiative that legalizes psilocybin for medical purposes and decriminalizes certain psychedelics. 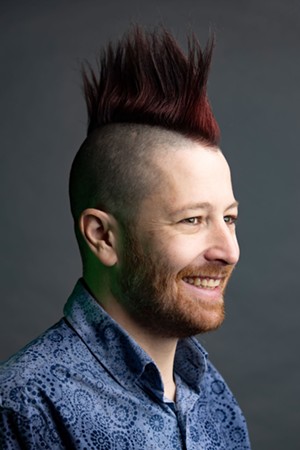 Rabbi Ben Gorelick
Courtesy of Ben Gorelick
On December 8, when Gorelick was in court to be arraigned, he and his attorney were told that the Denver DA had dropped the charges against him and the Sacred Tribe chemist. The dismissals, first reported by the Denver Post, were confirmed by Denver DA communications director Carolyn Tyler.

"In light of Proposition 122's passage, we decided it was no longer in the interest of justice to pursue either case," Tyler says.

The dropped charges were specific to the Sacred Tribe situation, she adds, and were not part of a larger effort to dismiss or clear charges and convictions for psychedelic-related activities that are now legal in Colorado.

In an email to Westword, Gorelick says he's "grateful" to the Denver DA for dropping the charges, and thankful for support from his Sacred Tribe members and legal representation throughout the case. Still, he notes that religious use of psychedelics isn't protected by state laws — just as the Department of Regulatory Agencies prepares to draft a regulatory framework for psilocybin consumption.

"There is so much that still needs to be done: work to codify religious protection; work to come back together as a community, to rebuild our personal and spiritual lives; work to bring our vision and mission to life," Gorelick writes. "But all of that can wait for tomorrow. Today, really, I just want to say thank you to everyone. We are very excited to get back to our spiritual practice and our mission of deepening our intimate connection to self, community, and G-d. Baruch atah adonai eloheinu melech ha'olam, hatov vhameitiv.

"Blessed is G-d, the good and the creator of good."

Under Prop 122, DORA will be responsible for drafting a regulatory framework for psilocybin access, including production rules and guidelines for legal healing centers, by 2024. DMT, ibogaine and mescaline were also decriminalized in Colorado under the measure, but state officials have until 2026 to study those substances and determine whether they should be legally accessible.
KEEP WESTWORD FREE... Since we started Westword, it has been defined as the free, independent voice of Denver, and we'd like to keep it that way. With local media under siege, it's more important than ever for us to rally support behind funding our local journalism. You can help by participating in our "I Support" program, allowing us to keep offering readers access to our incisive coverage of local news, food and culture with no paywalls.
Make a one-time donation today for as little as $1.