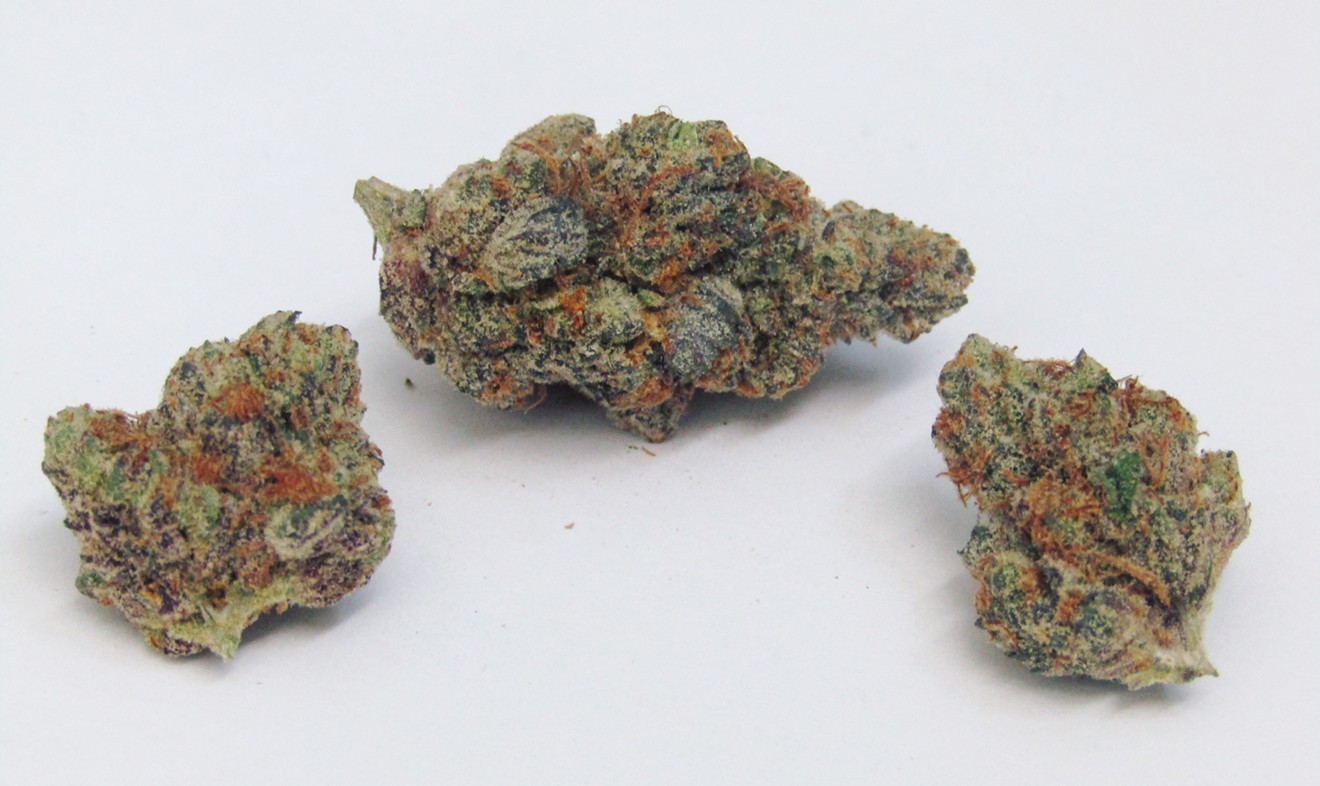 And you would’ve finished cleaning, too, if it weren’t for that meddling weed. Herbert Fuego
If you didn't like Scooby-Doo when you were growing up, you're probably not a dog person now. And I don't trust people who don't like dogs. Ergo, if you didn't watch the show, you're not allowed in my house. Not that I ask people before they visit or anything; that'd be weird. But if I find out? Peace.

Maybe it was my forever love for Scoob and the gang, or all the Shaggy memes flooding the Internet in January (Google it), but I just couldn’t resist a strain called Scooby Snacks — even after I found out that it was a child of Girl Scout Cookies, which I made a New Year’s resolution to avoid. The problem is, Cookies strains are damn near unavoidable these days. So much so, in fact, that all three commercial types of Scooby Snacks (or Scooby Snax, depending on the store) carry some kind of Cookies genetics.

Scooby Snacks/Snax is relatively rare in Denver but not impossible to find. I’ve seen it at the Clinic, Frosted Leaf, Higher Grade, the Joint, Levels and Smokin’ Gun Apothecary. Most of those dispensaries buy their Scooby from wholesale cultivator Veritas, which grows the Cherry Pie version; Higher Grade sells the Star Dawg cut.

A toker’s preference could depend on the time of day or what the dispensary is charging. Veritas’s version pushes sour, fruity notes of skunk and berry punch, and can help increase creativity and curiosity. However, the potent high drains focus eventually, and falling victim to the munchies only hastens that weed nap. Higher Grade’s strain also brings a stiff punch to the lungs, with a hearty skunkiness that’ll have you doing anything for more Scooby Snacks — maybe even meddle in a crime or two.

Looks: Because of its Face Off influence, the traditional Scooby Snacks is more open-ended and bright green than the Denver versions, which are rounder and denser and carry much more purple.

Smell: I prefer the Cherry Pie or Star Dawg cuts of Scooby Snacks. Both have a sweeter, fruitier aroma than the Face Off version, which gives off spicier hints of pine. All of them have sharp, rubbery sour notes.

Flavor: Expect a more tart and sweet profile from the Cherry Pie cut, but the Star Dawg and Face Off versions aren’t dull, either. Those sugary berry notes are strongest from the Cherry Pie, though, with the other takes attacking the sides of your tongue with sour, rubber and pine flavors.

Effects: Regardless of the dispensary selling it, expect Scooby Snacks to be a sedating strain, immediately easing tension and stress, both mentally and physically. Although some versions can induce creativity, most make me lethargic and lead to little more than relaxation and frequent yawns and stretching. Medical benefits are harder to pinpoint because of the differing lineages, but all have personally helped with a sour stomach, sleeping disorders, light stress and muscle pains.

Home grower’s take: “Haven’t seen anything outside of the Platinum Cookies and Face Off version in clones or seeds, so that’s all I know about. You have to keep the air dry and moderately warm if you want full buds and decent yields. Other than making sure of that, keeping it full and fed and making sure those short plants are free of overgrowing leaves, it’s not too hard to grow. Take around eight, nine weeks until you cut it down — nine, if you have the time.”