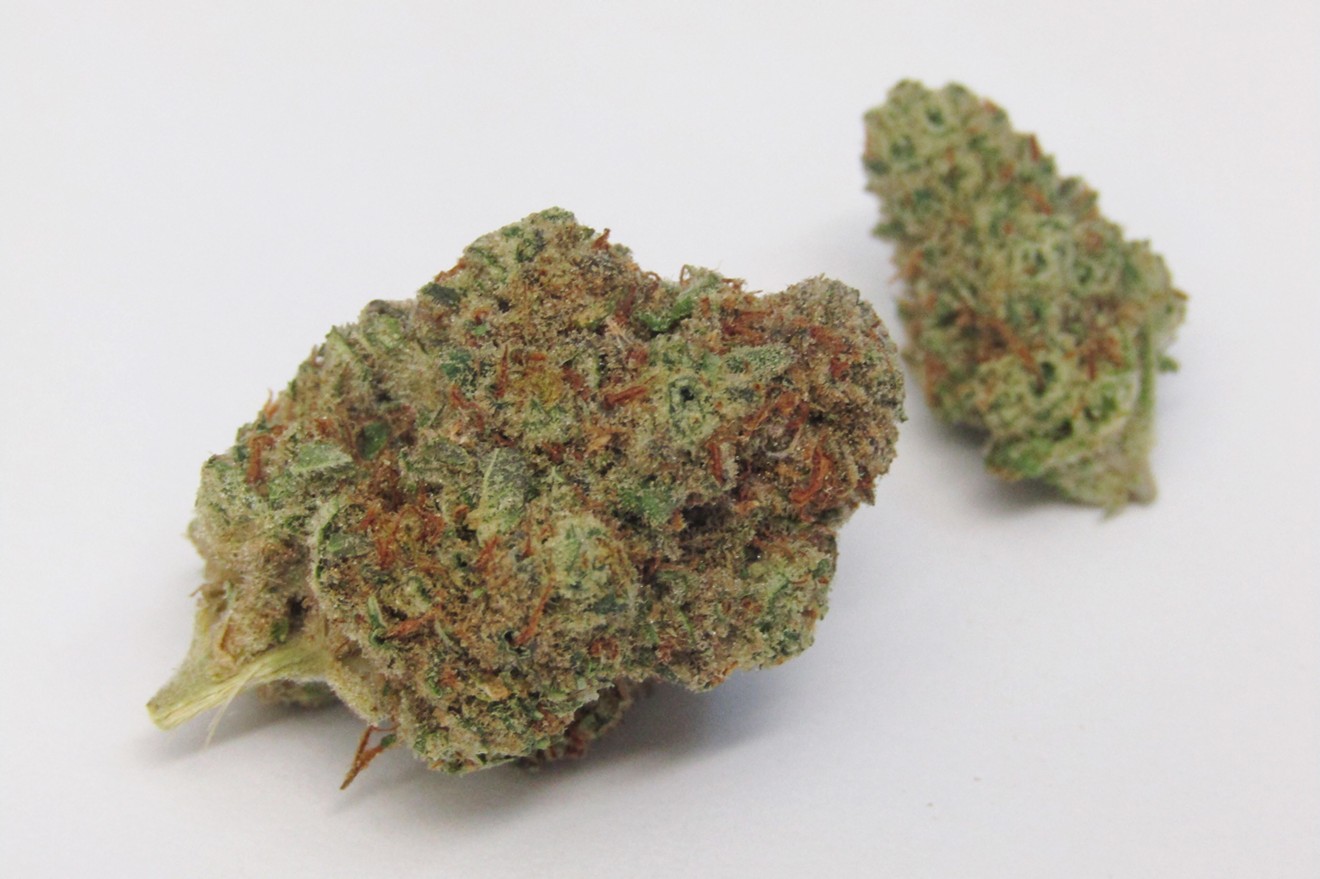 Tang Tang, and you'll hit the ground. Herbert Fuego
“Tang” is one of the more difficult flavor concepts for me to grasp. Is it sweet? Savory? Sour? A mix of all three? Calling something “tangy” at a family dinner table will often lead to an argument from someone who thinks tangy and tart are the same thing, thanks to powdered-drink-pushing chimpanzees. In actuality, tang is supposed be slightly sour while adding another fresh or zesty characteristic, as with plain yogurt, sourdough bread or certain tomato sauces.

Tangy cannabis strains are even harder to pinpoint, because the trait doesn’t really exist in most outside of Cannalope Haze and some peach- and apricot-leaning strains. Sour flavors in pot usually come from terpenes found in citrus fruits, which are clearly more sour than tangy — but when matched with light pine, herbal or floral notes, the tang is there.

Tang Tang (also known as Tropical Tang and just Tang) takes sweet, dank and savory notes of skunk and ripe peaches and pits them against a zesty, citrus-laden sourness, like a bottle of homemade barbecue sauce. The strain’s rare flavor and even rarer rush of energy have given Tang Tang somewhat of a cult following, with a high known for daytime euphoria and focused productivity. But to gain a cult following, there needs to be factor of under-estimation or low distribution. In my opinion, Tang Tang has to fight both.

A phenotype of Blue Sonja, Tang Tang has deep roots that stretch back to Blueberry and Grapefruit strains, and even further back to Afghani and Thai landraces. The strain’s genetics are reportedly around 90 percent sativa, and the high is perfect for the outdoor or active user — but Tang Tang’s yield is mediocre, and it takes several weeks longer than most strains to fully bloom. Those qualities are so ugly to commercial growers that two of Tang Tang’s children, Mob Boss and Pootie Tang, eclipsed it in popularity in Colorado years ago. However, you can still find Tang Tang around town intermittently.

Looks: Tang Tang is labeled a 90 percent sativa, and its buds fit that mold, with slender, open calyxes that look like a bunch of skunky, delicious blobs. That daytime reputation is made stronger by the strain’s bright-green color.

Smell: Tang Tang’s sweet smell of apricots, citrus and pine needles is rounded out with a heavy skunk aroma, giving it that “tangy” smell, like a salad with over-ripened fruit and heavy dressing.

Flavor: This is where you learn how rare Tang Tang’s flavor profile really is, as those tart, refreshing flavors stay wound tight instead of separating into layers, as happens with most citrus-heavy strains.

Effects: Treat Tang Tang like coffee that makes you hungry instead of wanting to poop: A little is extremely blissful and productive, but too much is disorienting, and your wit drains by the second. I use it for stress, slight anxiety, neck pain and a touchy stomach.

Home grower’s take: “She’s a pretty good strain for fall or winter if you’re growing indoors, because I remember my Tropical Tang doing very well despite about 5 degrees of temperature fluctuation at night or in the morning. That will usually fuck with a strain, but she kept pushing. Those last two or three weeks seemed like they took forever, though. It’s like the buds got to 90 percent complete within six weeks, then took another three or four to finish that last 10 percent. For an average yield, that’s a lot of time.”

Commercial grower’s take: “You might not see Tang around stores as much as you once did, but you’ll definitely see traces of it. Mob Boss has been a huge strain in Denver for a couple years now, and that’s a Tang hybrid. So is Ultra Sonja and Pootie Tang, I believe. They’re all just more friendly for profitability, and the high is similar.”