The 420 Games Purchased by Civilized, but Not Leaving Denver

The 420 Games has a new owner, but it will return to Denver in 2019. Brandon Marshall
Civilized Worldwide Inc. announced its plans to acquire the 420 Games, expanding the reach of the Canada-based cannabis media company into Denver, San Francisco, Los Angeles, Pittsburgh and anywhere else the event is held in the future.

“We’re thrilled to be expanding the 420 Games across North America, and we are looking forward to introducing the Games to Canadians in 2019,” says Civilized publisher Derek Riedle.

The 420 Games was founded in 2014 by entrepreneur Jim McAlpine in San Francisco and has steadily gained steam around the country. With legalization spreading farther across America and Canada approving the plant federally, Civilized took interest in a brand with a national footprint in hopes of making it international.

Denver's edition of the 420 Games takes place during the summer, setting up a number of games, competitions and obstacle courses at a public park, then celebrating with music, food and drinks at the end. The event raises money for a cannabis-related charity or nonprofit each year, and rewards competitors with medals to increase awareness about medical marijuana's potential for treating sports-related pains.

Research that supports the use of cannabis in sports points to its use as a preventative measure for pain and fatigue, as well as its advantages over opioid use for rehabilitation. One of the latest breakthroughs came when the BIG3 Basketball League announced that its signed players would be allowed to use cannabidiol (CBD) for pain management and inflammation; the NFL and the NFL Players Association have also agreed to research the use of marijuana for pain management. 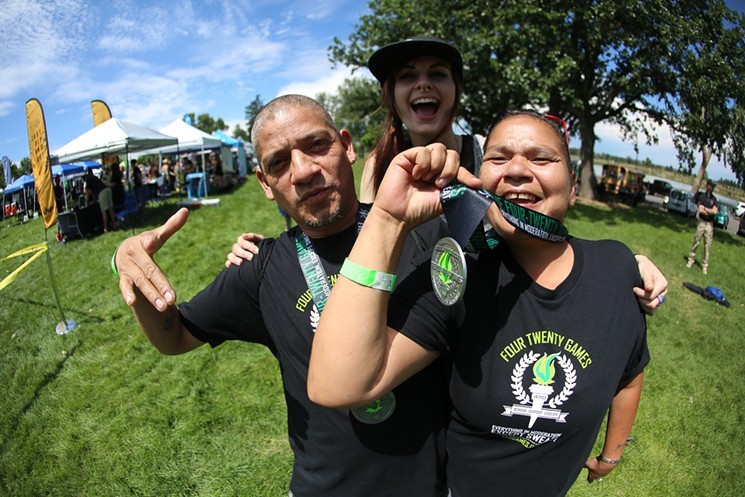 Do you have what it takes to medal against Denver's top athletes?
Brandon Marshall
“We’ve always taken a broad approach to cannabis culture and understood that cannabis plays an important role in the lives of active people all over the world," Riedle says. "From day one, we’ve talked about cannabis as a recovery aid, as a pain management, and as a tool to promote relaxation, and we’ve never been afraid to lean into that — even when it’s controversial in sport."

The 420 Games consists of one decathlon (more like dankathlon), which includes a forty-yard dash, a shuttle run, standing broad jump, long jump, maximum push-ups, sit-ups, burpees and squats in sixty seconds, a maximum plank-hold, and a 4.2-mile run around the Infinity Loop. Lighter games and competitions have included kickball and BMX.

Both Riedle and McAlpine stress the emphasis on de-stigmatizing cannabis use, especially for athletes, with Riedle adding that Civilized doesn't want to change much about the platform that McAlpine created — though there will be slightly different branding now.

“These events will touch on many aspects of the Civilized lifestyle, including music, art, sports and more. We’ll also continue to promote collaboration within the industry by hosting thought-leadership events such as the second annual World Cannabis Congress, happening in June," Riedle explains. "And we will be launching many more events soon."
KEEP WESTWORD FREE... Since we started Westword, it has been defined as the free, independent voice of Denver, and we'd like to keep it that way. With local media under siege, it's more important than ever for us to rally support behind funding our local journalism. You can help by participating in our "I Support" program, allowing us to keep offering readers access to our incisive coverage of local news, food and culture with no paywalls.
Make a one-time donation today for as little as $1.