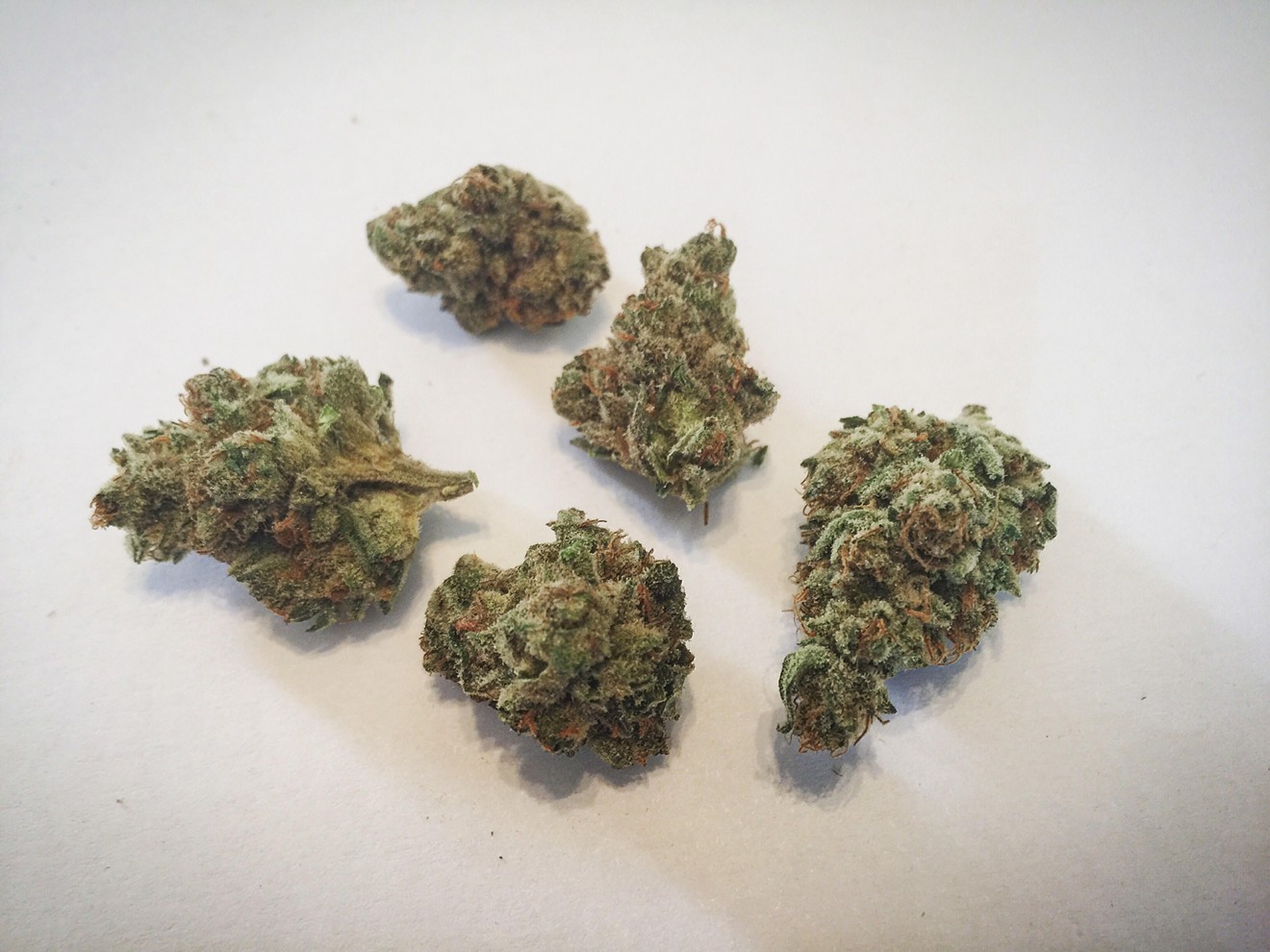 Red Headed Stranger is a combination of William’s Wonder, an Afghan-heavy indica bred in Fort Collins, and Tom Hill’s Haze, a Haze cut with Thai origins. I first saw its live resin at the Clinic, where it was a wholesale strain, then started noticing it at several shops around town. Although its subtle smell of oranges and cream cheese never blew me away, curiosity eventually took over, and I bought an eighth of flower from Lightshade and a gram of live resin from the Clinic. Both the buds and the live resin provided a high that felt closer to a 50/50 hybrid than a sativa. An energetic, baffled buzz kept me locked in my house for a few hours; that was followed by a strong indica pulldown. Smaller dabs or just one bong toke, however, proved to be manageable and effective at helping my morning appetite problems and neck pain, and the indica aftereffects were nonexistent.

Red Headed Stranger’s smell and flavor won’t win any awards, but they don’t come anywhere near the bland category of Power Plant or THC Bomb. Creamy, floral and citrus flavors pop much more once extracted, and the strain’s prolific trichome production enables bountiful hash blasting. Dispensaries like Lightshade, the Clinic, Colfax Pot Shop, Sweet Leaf, Natural Selections, Doc’s Apothecary and Botanico all either grow their own or sell cuts from wholesale growers like Kind Love and Willie’s Reserve, two of my favorite options.

Smell: Red Headed Stranger is dominated by sweet citrus smells, but floral, Haze-y undertones are present throughout; it can smell like gin and lemon or a weak Tom Collins.

Flavor: Earthy, spicy flavors of citrus and subtle tones of hash are noticeable in the flower, and the Haze and orange flavors are even stronger in concentrate form.

Effects: Its hybrid high should be immediately uplifting, fighting stress and exhaustion while amplifying appetite and creativity. Its sativa medical and recreational effects are complemented by pain relief and a cloudy sense of euphoria, making the second half of the high worth the wait for indica smokers.

Home grower’s take: “I bought these clones from Kind Love about ten months ago and was happy with the size of the buds. The calyxes were huge and stayed swollen after harvesting, but I’ve heard stories of it looking like mid-grade crap if you mess up the feeding schedule or lighting. Creamy, citrus smell that wasn’t the strongest, but its trichome coverage was really good — more of a looker than anything. The high was strong, too. Great hybrid. Not for the novice, because of what I just said, but the yields are okay if you’re patient.”

Commercial grower’s take: “The genetics are attainable and the yields are high once you perfect it, so it’s blowing up commercially. Also a strong trichome producer, so it’s like a one-two punch for dispensaries. I think the high is more enjoyable and easier to handle with flower, but the flavor is much better in BHO. Most of the growers around town are doing a pretty good job with this, but I really like what Botanico and Willie’s Reserve have done. Long flowering process — about ten weeks — but worth it if you have the experience.”