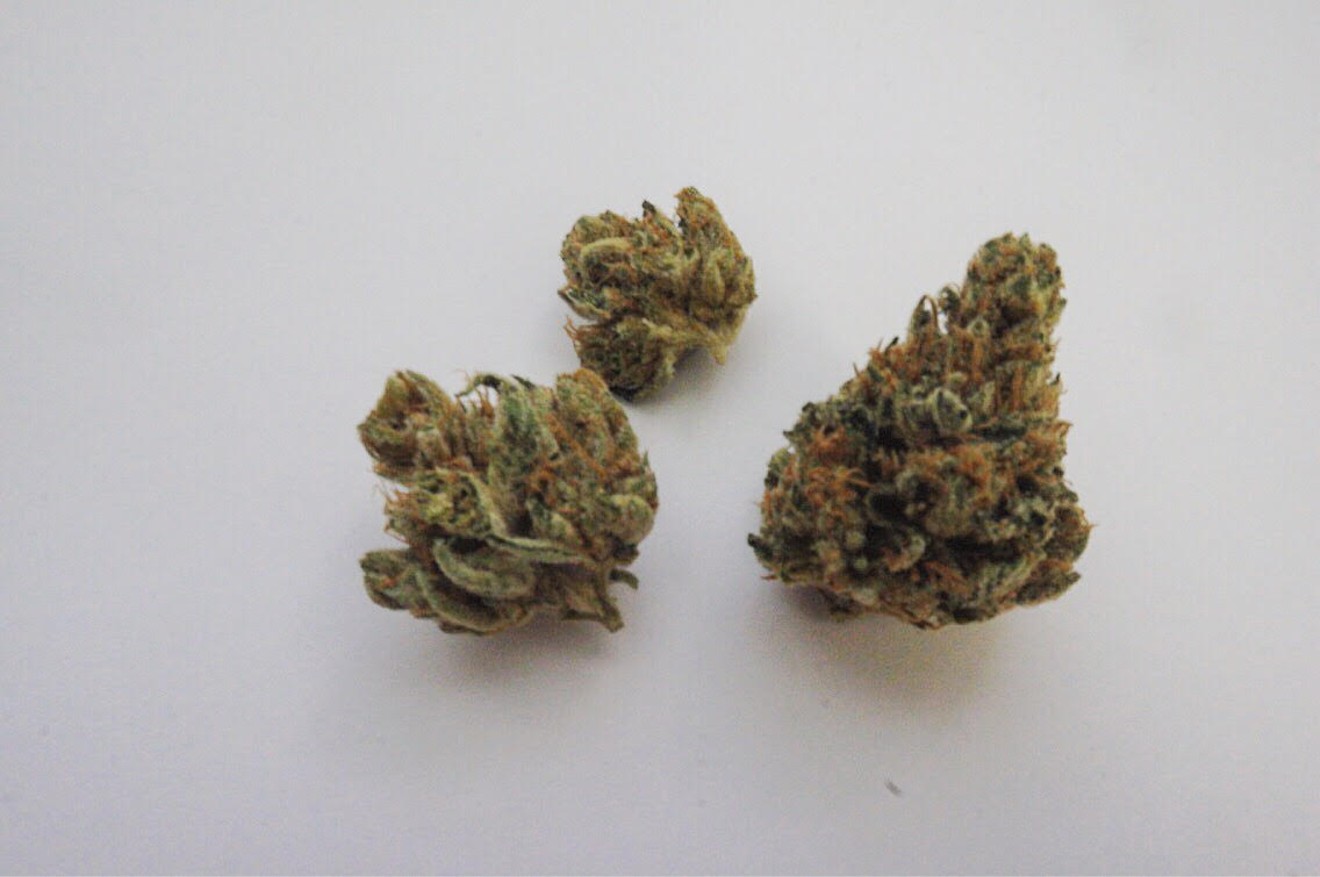 WiFi OG's genetics come in loud and clear. Herbert Fuego
Remember dial-up Internet? I can still hear that scratching beep on the phone line. Cable and DSL made life a little easier and porn a little clearer, but wi-fi made that era look like the Stone Age. Wireless Internet has been a game-changer: sharing information, bar debates, family dinners — it’ll never be the same. White Fire OG Kush, known as WiFi OG for short, came around in the early 2000s, about the same time I got rid of my ethernet cord. It didn’t change the world like Facebooking on your phone at Starbucks has, but it’s made a mark on dispensaries all the same.

WiFi is a good example of taking two semi-popular strains and creating something better. Don’t get me wrong: The White and Fire OG are fine strains in their own right, but they don’t bring the same potency and amenable high as their child, which carries on the White’s fertile resin-gland production and Fire OG’s tart, earthy flavors.

Despite its potency, WiFi is an easy high to handle for users with high tolerances, and newbies can roll with it just fine if they start small. The hybrid is thought to be slightly more indica than sativa, but my experiences with it have always involved more stimulation than lethargy. A couple bowls throughout the day can still medicate patients without making them too stoned. However, you can easily go full Spicoli if you want to: Two bags from a Volcano bowl ended a night prematurely last week, and another recent WiFi sesh motivated me to watch six hours of World War II documentaries.

My recommended WiFi cut is Kind Love’s, which is probably too expensive at more than $50 after tax, but so resinous and tasty that several other dispensaries sell it wholesale. Ballpark Holistic, Chronic Therapy, Denver Kush Club, the Joint and Oasis Cannabis Superstore also currently carry the strain, though I haven’t tried their takes yet.

Looks: WiFi usually has bulbous, dense nugs in the shape of a fist (sometimes with a thumb sticking out). While the strain’s density and shape look like Fire OG and other OG varieties, the White’s trichome production dominates the color. Milky resin glands suffocate a bright- or yellow-green flower color, similar to Gorilla Glue or Chemdawg, depending on the phenotype.

Smell: Fortunately, Fire OG’s sharp scents of soil, cedar and citrus transferred over to WiFi, as the White is known to be a bit bland in the smell and flavor departments.

Flavor: A minty, fresh mixture of pine, citrus and skunk are typical for WiFi. Earthy and lemon-citrus elements dominate the flavor, with skunky overtones throughout.

Effects: Even with the OG in its name and THC percentages reaching the low 20s, WiFi is one of my favorite daytime strains. It rarely causes drowsiness unless I smoke too much, and it’s great at leveling off caffeine and anxiety while inducing my appetite in the afternoon. Medical patients suffering from stress- and depression-related disorders, as well as chronic pain, nausea and exhaustion, can benefit from WiFi, thanks to its high potency and function-able buzz.

Home grower’s take: “I’ve grown this a few times. If I wanted to do it again, I missed the best time to grow it about a month ago, I think. WiFi likes pretty hot temperatures, like just a little below ninety degrees. I’ve always been told to watch the pH levels really closely with this one, too, because it likes its water more acidic than others, at about a six. Every plant has its preferences, though, and the yield WiFi gives is probably worth it. I usually get about one and a half pounds per square meter, but I know growers who haven’t been as lucky. Flowering should take nine to ten weeks, so be prepared for a long road ahead.”