Supervisory TSA Officer Richard Mendoza and spokesperson Lorie Dankers show the proper way to store firearms while traveling. The Transportation Security Administration
Like most people headed through the Transportation Security Administration line at any airport, I try to travel as expediently as possible, with the hope that the most exciting thing that happens is someone wearing a fun pair of socks (please, no bare feet).

On a recent trip through Denver International Airport on the way to Albuquerque for the holidays, though, things got a little spicier: Someone in the TSA line next to mine at the south security checkpoint had a gun in their luggage. My fiancé and I spotted it on the screen, whispering “No way” to each other.

Way: The TSA agent monitoring the screen summoned another agent. It seemed like more kept coming, looking at the screen and talking quietly to each other. We wondered if they didn’t know what to do, or if there was some sort of protocol that called for extra agents to be summoned.

TSA spokesperson Lorie Dankers says it’s the second option. The agent who discovers a firearm calls in a colleague to confirm what they’re seeing. Then they notify a supervisor, and the supervisor brings in members of the Denver Police Department’s DIA Police Bureau to secure the firearm. The result is four or five law enforcement officers at one station.

In 2022, the TSA discovered 156 firearms at DIA’s three security checkpoints — but as Dankers notes, most other passengers don’t even notice.  All they know is they’re being held up in line, because the X-ray machine can’t be used and the luggage can’t be moved until police have the firearm in their possession.

Those 156 firearms represent about a 10 percent increase over the 141 found in 2021, and also set a record for most firearms found at DIA security during X-ray screening of carry-on luggage.

“We're sort of on a trajectory we'd like to reverse,” Dankers says.

Nationally, the upward trend is the same, with 6,542 firearms found across the country, up from 5,972 in 2021. Dankers says that small guns, like handguns, are the most likely to be found, because larger guns are harder to "incidentally" pack. 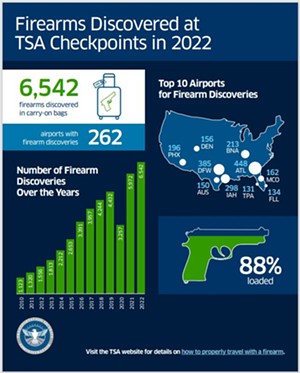 Only 80 percent of the guns found at DIA were loaded, lower than the national average.
The Transportation Security Administration

“What we're finding is these firearms are in the bottom of people's carry-on luggage. Loose. Loaded. And it's really carelessness,” she says, adding that even those who have concealed-carry permits are not allowed to bring guns in their carry-on luggage. “It's time that people paid attention if they have a gun.”

They should pay attention — if not for the safety of their fellow travelers, then for their own sake. Those who bring guns to the security checkpoint are immediately detained by the DIA Police Bureau and taken to the bureau’s administrative offices. At a minimum, they are delayed, but they also can be issued a criminal citation.


Denver ranked seventh for number of firearm discoveries by TSA in 2022. It was the tenth-busiest airport for TSA checkpoint screening, with officers discovering firearms in carry-on luggage at a rate of 7.3 firearms per million passengers screened.

“It is a little disappointing to be in the top ten here in Denver, but I think the more we talk about it, the more people realize that they have options to travel with their firearm,” Dankers says.

According to the DPD, if the gun is loaded, it meets the criteria for criminal charges; 80 percent of the firearms discovered at DIA in 2022 were loaded. The loaded firearm will be seized as evidence, and the traveler will be placed into custody and transported to the DIA Police Substation for processing. If no violations other than the weapons violation are found, the person is released pending the legal process in court. The DPD says the process is usually fast enough that it doesn't interfere with the person's ability to travel that day.

If the firearm is secured and not loaded, then it doesn't meet the criteria for criminal charges, and the person is given the opportunity to legally declare it for travel or surrender it as personal property.

In addition, TSA evaluates the situation and will levy a civil penalty against the person with the firearm, ranging from a few thousand dollars to up to $15,000, according to Dankers. If someone has a Trusted Traveler designation or TSA PreCheck, those benefits will also be revoked for a period of time.

“I don't know many people who are waiting around to give the government money, to pay them a civil penalty, when it could be avoided by the simple process of properly protecting your firearm for travel,” Dankers adds. All ammunition must be in its original packaging.
The Transportation Security Administration

TSA considers the circumstances to determine the penalty amount, including whether the gun is loaded.

To those traveling through the airport without a firearm, people who bring firearms cause delays.

“We know how frustrating that can be for travelers, especially at Denver, where it is so busy,” Dankers says. “When you come to the airport, you're trying to complete each step in a row without delays, and that is going to delay you. It's going to delay everybody around you.”

People looking to travel with firearms without angering other travelers, incurring civil penalties or being awarded a visit to the DIA Police Bureau offices can put their firearms in their checked luggage. Checked firearms must be unloaded, with the magazine removed. Any ammunition must be stored in its original packaging, and everything must be in a hard-sided case that locks.

Unlike other locked items, the TSA recommends a non-TSA-approved lock for those cases as an extra layer of protection against the gun's being removed from its case. Travelers must notify the ticketing agent that a bag contains a firearm when they check it.

“People do this all the time,” Dankers says. “It's not a surprise.”

The agent will provide a declaration that the firearm is properly packed. TSA recommends checking with the specific airline before arriving at the airport to confirm that everything is done to their specifications. If a firearm hasn’t been properly packed, the traveler is called back to pack it according to requirements before they can continue on their trip. Depending on the circumstances, TSA could take additional measures.

The takeaway here: Don’t bring your firearm to a security checkpoint, so we can all get where we're going safely and on time.
KEEP WESTWORD FREE... Since we started Westword, it has been defined as the free, independent voice of Denver, and we'd like to keep it that way. With local media under siege, it's more important than ever for us to rally support behind funding our local journalism. You can help by participating in our "I Support" program, allowing us to keep offering readers access to our incisive coverage of local news, food and culture with no paywalls.
Make a one-time donation today for as little as $1.