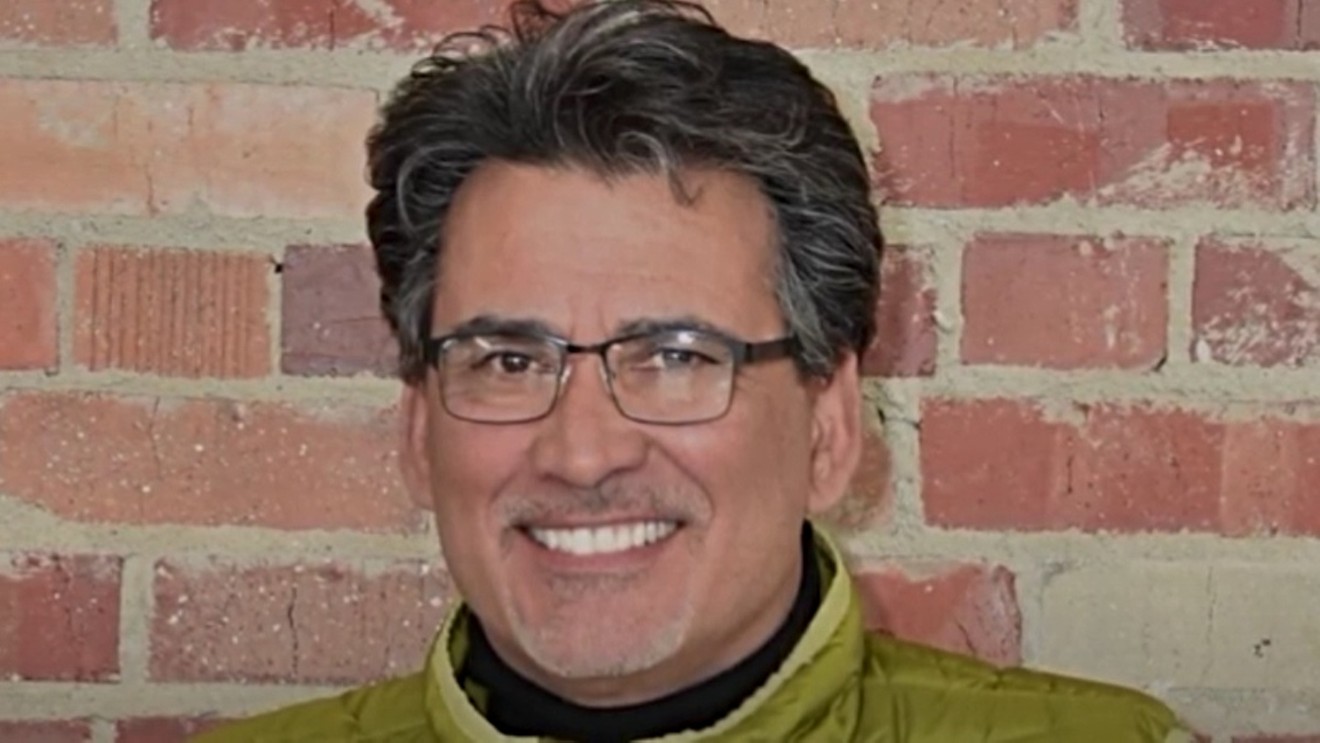 Jesse Ogas was named 9News leader of the year several months before the station hired him. Denver Metro Chamber Leadership Foundation via YouTube
The success of Denver's 9News is indisputable: The station's news products have dominated ratings in the Mile High City for decades. But in 2021, the NBC affiliate suffered a series of public-relations blows when it was charged with bias and racial insensitivity, with many of those claims coming from previous employees.

In response, 9News hired Jesse Ogas, who'd been named its 2021 leader of the year last March for his work with Firefly Autism, a disability services and support organization dedicated to helping autistic kids, for a new position: executive director of social responsibility and community affairs. Ogas started the job in October, and while he's under close scrutiny from past and current 9News employees, many of whom fear that his presence is merely intended to deflect criticism rather than create change, he's relentlessly upbeat about the new job and appreciative of those staffers who've shared their experiences, good or bad, with him so far.

"I've seen a willingness for people to speak up, and that's so cool, because unless people speak up, you never know if there are underlying issues," he says.

"LatinXed: 9News Got Rid of Three Latina Reporters This Past Year, Including Me," an essay by Lori Lizarraga published by Westword on March 28, 2021, documented plenty of the latter. In the piece, Lizarraga shared personal stories of what she saw as prejudicial treatment while also exploring the experiences of fellow ex-staffers Kristen Aguirre and Sonia Gutierrez. Aguirre was let go by the station less than a year after suffering a stroke (she filed a lawsuit against the station in November); Gutierrez was allegedly told she couldn't cover immigration-related topics unless she first publicly disclosed her own immigration status.

Similar accusations turned up in an April 2021 filing with the U.S. Securities and Exchange Commission, which asserted "a broad pattern of bias and racially-insensitive behavior" at 9News and its parent company, media giant TEGNA. And in July, eight past and present 9News employees told Westword that the station could be a hostile workplace, particularly for young women journalists of all descriptions. While their experiences varied, the employees described a culture in which disrespect was commonplace and they found little support. They said they were treated as if they were disposable and could be tossed aside if they expressed concerns, since managers — both males and females — knew there were many other fledging reporters who would eagerly take their place.

Shortly thereafter, the station reached out to Ogas, who had never worked for a media organization. He'd spent seventeen years in corporate roles for various retail corporations, including Sears, Mervyn's (a now-defunct department store chain), Target Corporation, Kohl's and May D&F during the period when the firm merged with Foley's. He was also part of the team that opened the Cherry Creek Shopping Center before he shifted into the nonprofit world, which he portrays as a natural transition even though "my peers thought I was absolutely crazy."

Ogas had long been a member of nonprofit boards — his first was the Colorado AIDS Project — and he says he realized that such organizations "needed to approach their work like a business or they weren't going to be relevant in the future. So I wanted to be part of creating a social responsibility aspect, where we could align the core values of businesses with nonprofit organizations to make sure it was a win-win for everyone."

For a year, Ogas worked as a director of community relations for Denver Public Schools before moving to Firefly Autism, to which he'd been introduced by former U.S. Senator Ken Salazar, a friend whose granddaughter was diagnosed with the condition. He became Firefly's executive director and CEO in 2015, and he was happily serving in that role when 9News came calling. 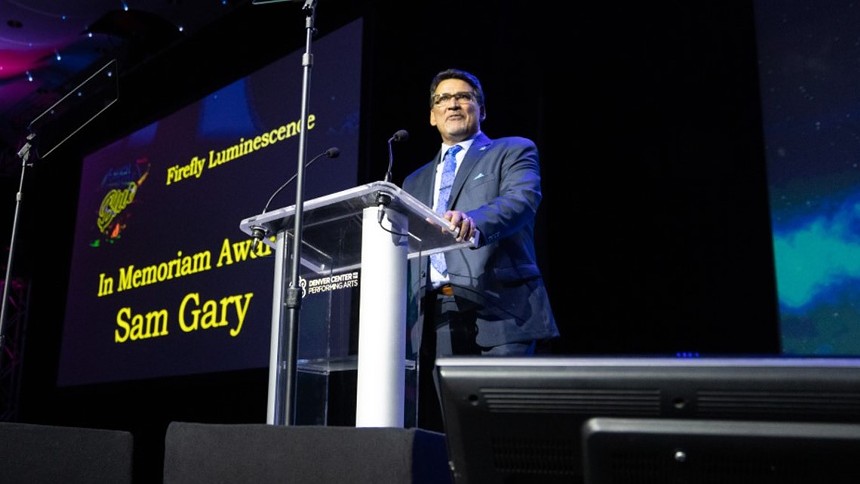 Jesse Ogas at the lectern.
Courtesy of Jesse Ogas, via 9News
He was very familiar with the station, he says: "I've been affiliated with 9News for a long time. As a community member, I've participated with many different stories, whether it was with journalists on stories about nonprofit organizations or co-hosting Colorado & Company with Denise Plante or being a guest on the show to highlight some of the amazing work going on in our community."

As a result, he was immediately receptive to the new gig, which considers both the topics the outlet tackles and the way employees are treated. "I thought, what an amazing opportunity to have a platform like 9News to really dig into the unsung heroes in all walks of life who are working to make our state a better Colorado every day," he says. "But I'm also very passionate about ensuring we always create a culture of safety and equity where people can be brave and courageous, and where people can learn from their failures. Because that's been a big part of my success."

The acronym DEI, which stands for diversity, equity and inclusion, pops up frequently in Ogas's conversation. "It was important for me to come into the station with a fresh set of eyes and ears and have one-on-ones with people where they can talk about what's important to them and I can share what I'm passionate about," he explains. "That's what the work of DEI means to me — to listen and be an ear for people, and then take these conversations and expand on them, so that we can focus on creating the culture we all want."

Did Ogas find big DEI problems at the station? If so, he doesn't mention them, nor does he either confirm or deny charges made in Lizarraga's essay, the SEC filing or the subsequent Westword article about young female employees. Instead, he speaks in positive generalities that portray higher-ups at the station as legitimately dedicated to making 9News a more equitable place for all. But he also stresses that "I'm part of the executive team. I'm at the table when we're talking about inclusivity, whether it's about personnel, production, editorial or media content. Because it's important that we ensure the focus is not only on the news, but on the community we serve."

In February, Ogas is planning to revive the 9Listens Community Cabinet, which was last active in 2019; he describes it as "a cabinet of community members who will meet regularly to talk about issues in reporting and media coverage. We will include members of our Latino, Black, Asian and LGBTQ communities, so we can make sure that we're building a cabinet that is truly representative of the amazing diversity we have in Colorado."

During 2021, Ogas says, 55 percent of those hired at 9News were women and 64 percent were "diverse." He also touts efforts to diversify the 9News management team; right now, it includes director of reporting Nelson Garcia and assistant news director Erica Tinsley, whom Ogas characterizes as "our very first Afro-Latina leader." But Tinsley wasn't promoted to assistant news director, a position that had previously been eliminated, until after the publication of Lizarraga's post. Around that same time, 9News created a new race-and-culture reporter position that was subsequently filled by Victoria De Leon. But TEGNA is currently advertising for her replacement: De Leon recently left the station after only about a year on the job, and the native Texan tweeted on January 11 about how excited she is to start working at a sister outlet in San Antonio to which she transferred.

The timing of these developments, as well as Ogas's arrival, strikes some past and present 9News staffers as highly suspicious. These sources, who asked to remain anonymous, say they don't see any evidence of substantial change at the station since the publication of Lizarraga's piece, and suggest that the media outlet has simply been engaging in public-relations-friendly tokenism since then. While they add that they don't want to pre-judge Ogas so early in his tenure, one person described him as well-intentioned but "performative" — a term that coincidentally alludes to his sideline as an actor and singer in local stage productions.

Clearly, Ogas still has some persuading to do regarding his role at the station — yet he believes 9News is on the right track. "We've got people of color at the table helping to shape and mold the organization from the inside out, which is absolutely critical when you're working to create a culture of inclusivity," he says. "People are engaged, and people want to be heard. They want to be part of the solution, and that's important, because unless you can motivate the team to be involved, you're never going to get anywhere."
KEEP WESTWORD FREE... Since we started Westword, it has been defined as the free, independent voice of Denver, and we'd like to keep it that way. With local media under siege, it's more important than ever for us to rally support behind funding our local journalism. You can help by participating in our "I Support" program, allowing us to keep offering readers access to our incisive coverage of local news, food and culture with no paywalls.
Make a one-time donation today for as little as $1.