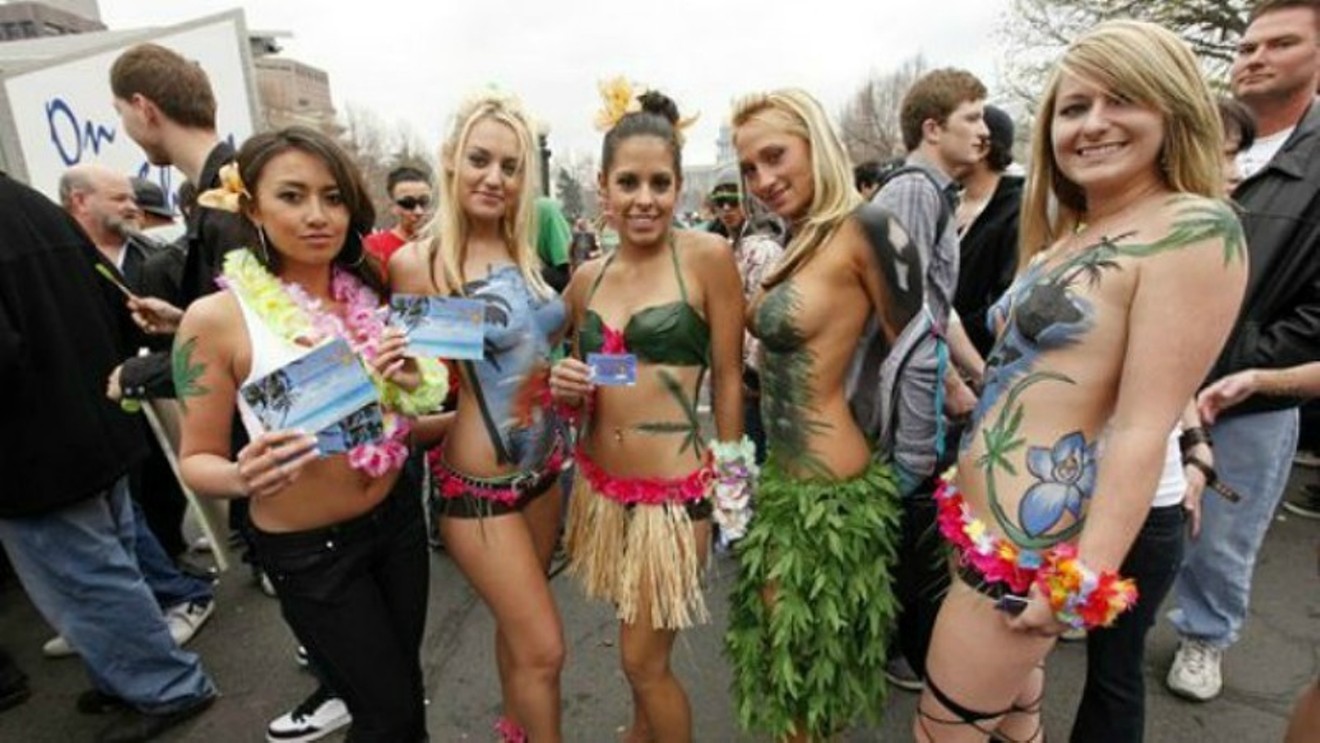 A photo from our slideshow "4/20 in Denver: Part One (NSFW)." Photo by Aaron Thackeray
Attorney Rob Corry has now filed a second complaint in regard to the Denver 420 Rally. He'd previously sued the City and County of Denver on behalf of rally co-founder Miguel Lopez, who lost his priority event status and was banned from putting on the event during the next three years for allegedly violating his permit by leaving Civic Center Park trashed. Now he wants injunctive relief on behalf of another client, Michael Ortiz, who was initially granted a permit for April 20 only to have his application denied by Allegra "Happy" Haynes, Denver's Parks and Rec director, and given instead to Euflora, a dispensary chain with very different plans for the gathering.

The latest document, filed late on January 19, is accessible below. When asked about it via email, Corry writes, "Happy Haynes is completely out of bounds, and she knows it. There is zero basis to deny Ortiz the permit he already has."

As our Thomas Mitchell has reported, Euflora "had employees camp outside the Denver Department of Parks and Recreation office on Colfax Avenue starting in October, waiting for the day the city would accept event permit applications for April 20, 2018. However, neither Lopez nor Euflora were first in line. Michael Ortiz, an associate of Lopez's, beat Euflora staffers to the application window during the early hours of November 21, securing his permit's place at the top."

Mitchell added: "Euflora's Bobby Reginelli was vocal about his displeasure with the city's handling of security and entrances to the Parks and Recreation building the previous evening, accusing Ortiz of slipping in through an unapproved entrance and being unclear with security about his application intentions. After weeks of deliberation, the city agreed with Reginelli, denying Ortiz's application on the grounds of 'misrepresentations and deceit.'"

To put it mildly, Corry and company disagree with this characterization and accuse Haynes of being less than honest in an effort to deny Ortiz's rights. Here's a segment of the suit that juxtaposes Hanes's statements, labeled as "deceitful," with the "truth:" 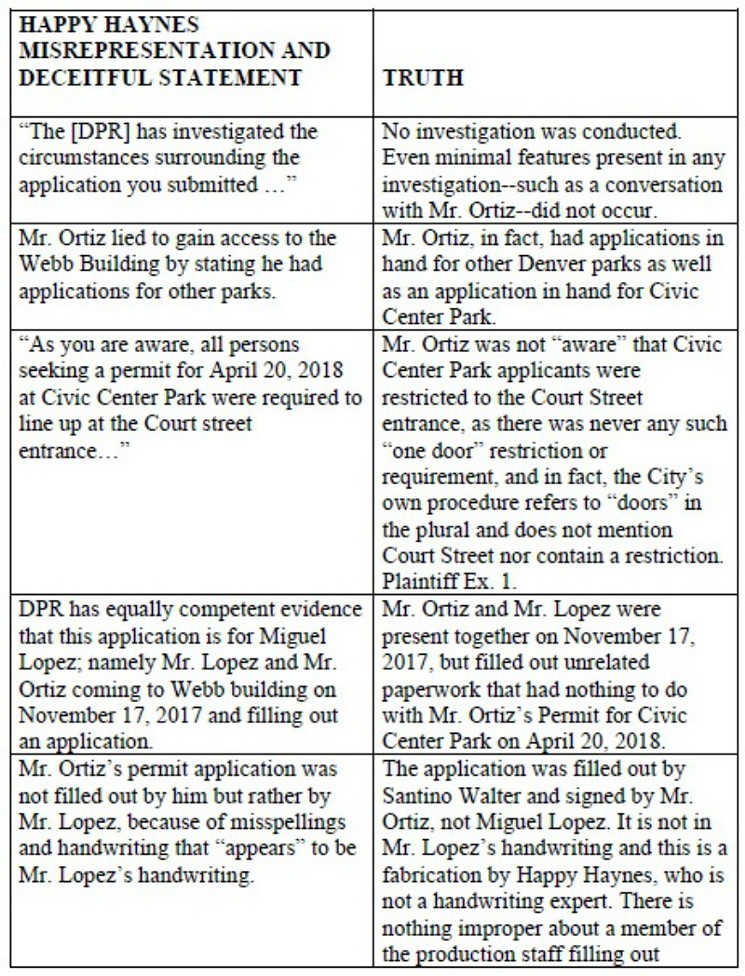 Courtesy of Rob Corry
In its "prayer for relief," the complaint asks Denver District Court to "review the lower judicial or quasi-judicial body and find that it abused its discretion in revoking the Permit of Mr. Ortiz; enter a declaratory judgment that the Defendant’s actions and conduct violated and continues to violate the First and Fourteenth Amendments to the United States Constitution; to enter a temporary restraining order, preliminary injunction, and permanent injunction, against Defendants prohibiting and enjoining them from revoking Plaintiff Michael Ortiz’s Permit for an event in Civic Center Park on April 20, 2018; any such further legal and equitable relief as the Court may
deem just and proper, and demands a jury on all issues so triable."

Corry adds: "My law firm specializes in fighting government corruption. Both Miguel Lopez and Michael Ortiz are victims of this; they are on the same side. As long as Happy Haynes maintains her three conflicting positions in Denver, unfortunately it is full employment for lawyers who fight government corruption."