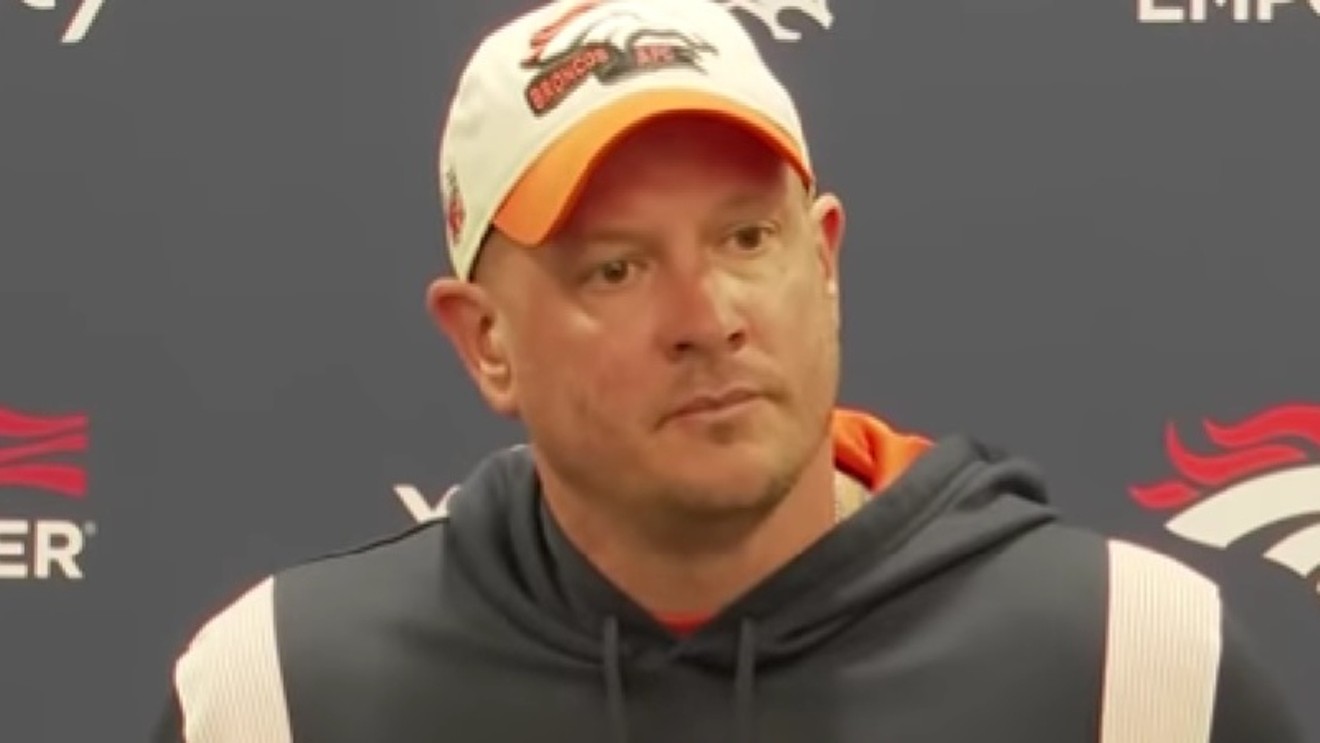 Fans on Twitter responded with anger over the continued employment of head coach Nathaniel Hackett, and no wonder. After all, many Broncos loyalists had started treating Hackett like a fired man walking after the previous week's humiliating defeat to the Las Vegas Raiders — and with the prospect of the playoffs now out of the question, attention is turning to a future that doesn't include Hackett.

How long until that glorious day arrives? Pro Football Talk suggests that he's likely to remain on the job until the end of the season — and if that's the case, the frustration in Broncos Country will soon begin registering on the Richter scale.

Most Denver devotees will be unable to read a breakdown of the game without breaking down personally. So suffice it to say that being humbled by the Panthers represented a new low in a campaign full of them. Carolina's quarterback, Sam Darnold, was starting his first contest of the season; he's widely considered to be a mega-bust, and the half-empty stadium was evidence that the squad's local appeal is at subterranean levels. Yet the team was clearly more inspired than the Broncos, who have collectively waved the white flag. At this point, they can only work up any fire when they're turning on each other, as happened when defensive lineman Mike Purcell gave QB Russell Wilson an earful in an exchange captured by TV cameras.

Afterward, both Purcell and Wilson played down the conflict, but no one was fooled. The defense remains strong even after the departure of Bradley Chubb a few weeks back, while no one should be forced to watch what's happening on the other side of the ball. Even if Hackett is no longer calling the plays (Klint Kubiak has taken on that task), his offense is unimaginative and moribund, making it difficult to know if Wilson's sudden ineptitude — he only threw for 142 yards, much of that in garbage time — is a result of the scheme or a severe deterioration of his skills.

Of course, Wilson isn't going anywhere, since he signed a giant contract prior to the start of the regular season. That makes Hackett the designated scapegoat, with general manager George Paton, who engineered the huge deal to bring Wilson to Denver, in the on-deck circle.

The next move belongs to the new Broncos ownership group, led by Walmart heir Rob Walton, daughter Carrie Walton Penner and son-in-law Greg Penner. Will this triumvirate wait to oust Hackett for fear of looking as if they're reacting in a knee-jerk fashion? Or give him the heave-ho immediately, even if it means chaos in the short term? Broncos fans are waiting for the answer with much more interest than they'll have in the contests over the rest of the season.

Continue to count down our picks for the twenty most memorable tweets about the Panthers debacle:

Get rid of Hackett and send him back to the Packers. They only hired him thinking they’d get Rodgers.

Today would be a great day to fire Hackett! @Broncos

Nate Hackett is literally one of the worst head coaches in NFL history. He rode Aaron Rodgers coat tails. This is the Broncos own fault they shoulda gave known

Hackett is horrible and Wilson has played poorly and he’s not exactly surrounded by top level talent either. Tons of blame to go around. That FG attempt in the first game is legendary hackett should have been fired for that game alone

We Broncos fans overrated our weapons and Nathaniel Hackett and his offensive staff are idiots and don’t fit Russell Wilson.

George Paton’s job is on the line with this next coaching hire pic.twitter.com/RGIzj9fy9B

How about we pump the brakes for a second. Hackett will be fired, the Broncos will get back a stable of dangerous receivers and a legit threat running back, linesmen, D-backs, and Jeudy next year. Time will tell.

Has anyone figured out how the @Broncos haven’t fired Hackett. I mean, you can’t fire Russ. That team is so bad. I’d rather watch paint dry than a team who has latavius Murray as their best offensive player.

Let's discuss when overdue changes will be made to Broncos.

Let me know when Hackett is fired.

@Broncos Nathanial can’t Hackett. Do we need a negative score for you to see that or what?

2. Get an experienced, offensive minded, 2nd time head coach like Frank Reich or Sean Payton (Historically the only good type of coaches for the Broncos)

3. Fire all staff that is related to strength, conditioning, and health

Is Nathaniel Hackett the most incompetent coach in Broncos history?

Please lord let us awake tomorrow and receive the news that Nathaniel Hackett is no longer the head coach of the Denver Broncos. Amen.