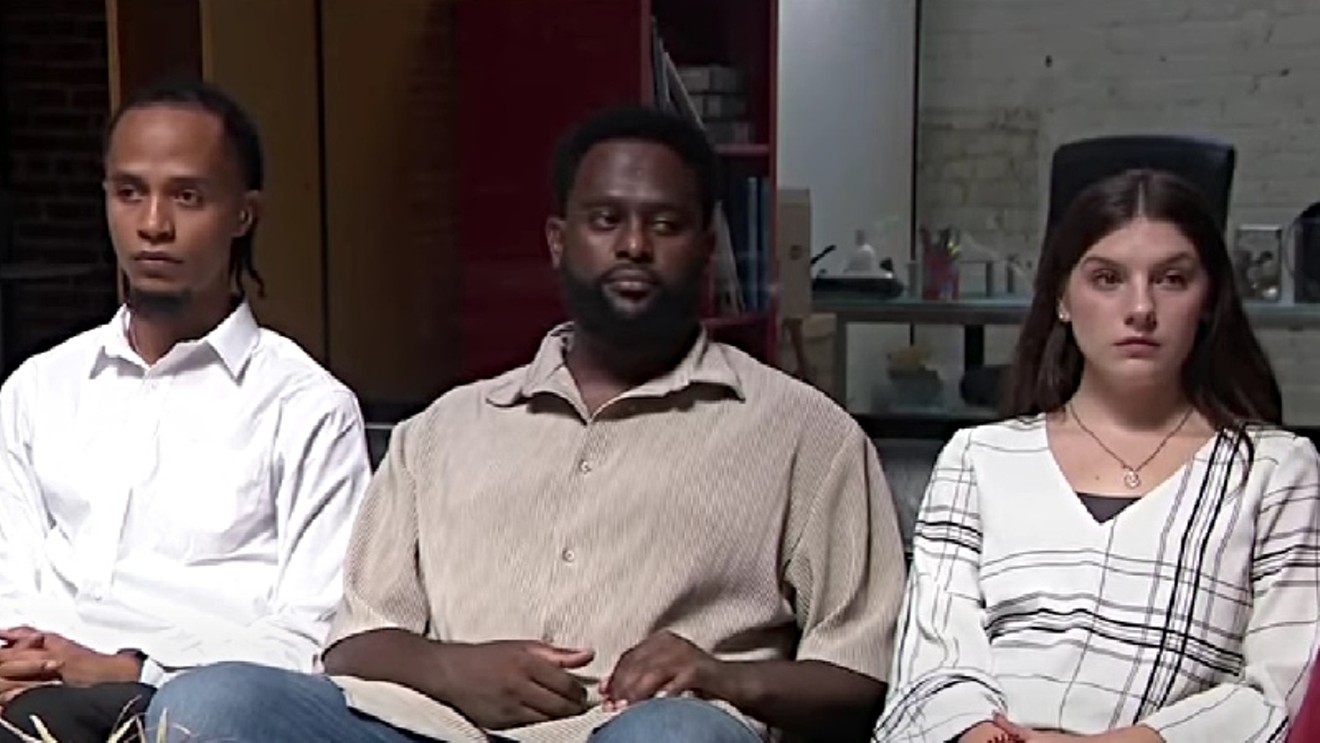 Willis Small IV, Yekalo Weldehiwet and Bailey Alexander were all wounded during the shooting. Denver7 via YouTube
The release by the Denver Police Department of disturbing videos from a July 17 officer-involved shooting near 20th and Larimer streets spurred differing reactions from Bailey Alexander, Willis Small IV and Yekalo Weldehiwet, three of the six innocent bystanders wounded by gunfire from law enforcement officers that night.

As of late yesterday, August 17, when the three spoke to Westword from the offices of Rathod Mohamedbhai LLC, the Denver-based law firm working on their behalf, Weldehiwet was not yet ready to view images of events that led to the bones in one of his arms being shattered by police gunfire shortly after he exited the Larimer Beer Hall. "I couldn't get myself to watch the videos," he said. "I'm still dealing with the whole process."

In contrast, both Small, wounded in the foot during the episode, and Alexander, who took a bullet that entered her back and passed through her arm, screened the footage, which revealed that Jordan Waddy, whose scuffle with another patron made him the target of police action, was unarmed when officers shot him multiple times, and they reacted with a mixture of anger and disbelief.

"I was truly shocked to see the suspect not pointing the barrel toward the police, even though that was publicly said," Small noted.

"It seemed like he was complying with officers' commands," Alexander added. "He immediately put his hands up and put his gun on the ground, and then shots were fired. It's very frustrating that shots were fired at all." An enhanced screen capture from video footage of the July 17 officer-involved shooting near 20th and Larimer shows that suspect Jordan Waddy had tossed his firearm aside before a Denver cop opened fire.
Denver Police Department via Tyrone Glover Law/YouTube
During a July 20 press conference and in a critical-incident-briefing video issued by the Denver Police along with unedited video from HALO cameras and body-worn devices, Commander Matt Clark of the DPD's major crimes division didn't mention that Waddy, who's been charged with three counts of weapon possession by a previous offender and one count of third-degree assault, had tossed his handgun aside before the first trigger was squeezed. Instead, he maintained that when Waddy removed the firearm from the pocket of his hoodie, holding it by the slide rather than in a pistol grip, the muzzle had crossed in front of two officers, prompting them to shoot. He also stressed that the cops on the scene had been careful to make sure they had clear sight lines before opening fire, even though a large crowd was present in the vicinity of the venue and a nearby food truck; the incident took place at around 1:30 a.m., during a period known as let-out.

"Every step of this shooting, the Denver Police Department has attempted to obfuscate and hide the truth," he maintained. "After these three individuals were shot and were at the hospital, the DPD began their own investigation into the shooting but never told them that a Denver police officer shot them. They had to learn that from the news. Then, Denver had a press conference, where there were statements like 'The suspect pointed the muzzle of the gun at an officer' — but then we learned from the video that wasn't true. And at the press conference, Denver also left out that the suspect at one point had his hands up in the air, surrendering, and that the suspect threw his gun on the ground prior to being shot. Those omissions are as telling as outright lies."

Here's a compilation of the video footage assembled by Tyrone Glover Law, which represents Waddy in a civil-rights context.
The actions taken by the officers stood out to Rathod, a military veteran: "I was a captain on active duty from 1999 to 2004, and every Marine has ingrained in them the four rules of weapon safety — and the fourth rule is, 'Know what is behind your target.' Denver claims that these officers had clear shots and clear sight pictures, but we know that's not true, because six innocent people were shot. Yekalo had surgery two weeks ago and now has an entire plate in his arm. Bailey has a hole in her back. Willis is still limping."

Denver District Attorney Beth McCann will bring the case before a grand jury tasked to determine if indictments against the officers are warranted. But although he commended her for this choice, Rathod also characterized the move as a special privilege reserved for law enforcement officers. "No other citizen of Denver would be given the courtesy of a grand jury," he said. "Rather, charges would have been immediately filed against them. And we hope the grand jury isn't a means to shift responsibility from the DA's office, and instead that the officers are prosecuted with the full power of that office."

For Willis, the video underscored just how many people were put in harm's way by the officers' decision to shoot: "All of it showed the image of a large crowd where anything could have gone very wrong if a bullet would have traveled a couple of inches in a different direction. I'm very surprised it wasn't a lot worse and that they would feel comfortable shooting into that kind of a crowd."

"There really was a huge crowd right there, three feet away from everything that was happening," Alexander confirmed. "Looking back on it and seeing the videos, I don't remember hearing any sort of warning to the crowd to get out of the area, or to get down, or even warnings toward the suspect, either. It all happened so quickly, but it's set in concrete in those videos."

After the shooting, the City of Denver responded by announcing that food trucks would no longer be allowed to operate between 19th and 20th streets on Blake Street, 19th and 21st streets on Market Street, and 20th and 21st streets on Larimer on Fridays and Saturdays. This move was "total bullshit," according to Leilani Johnson, owner of the RJ's TacoWich food truck, who started a petition to lift the ban earlier this month. 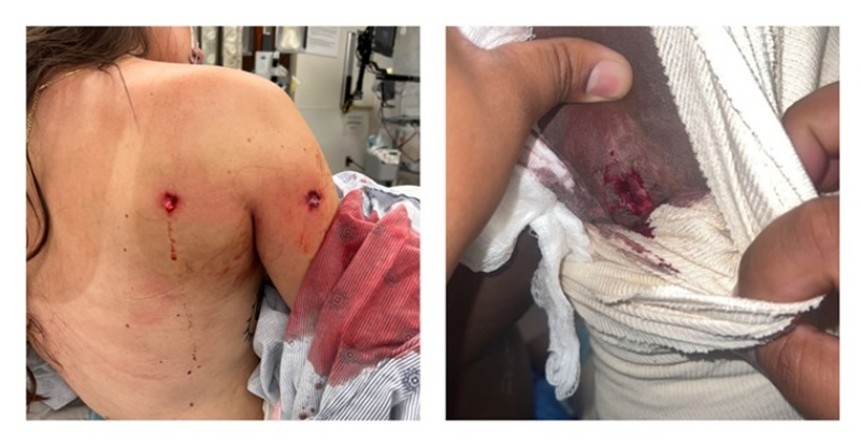 Photos of the wounds suffered by Bailey Alexander and Yekalo Weldehiwet.
Courtesy of Rathod Mohamedbhai LLC
To Alexander, who was at a food truck when the shooting began, the prohibition is evidence of misplaced priorities. "It's not the way they should be going about this at all," she said. "They should be thinking what the Denver Police Department should be doing differently rather than taking food trucks away from downtown at the busiest part of the night."

The officers involved in the shooting were already in the area as part of an effort to prevent trouble during let-out. But Small thinks they may have had the opposite effect: "There was already a heavy police presence at that location, and considering the size of the crowd, that's probably not a good area for them to be in general." He acknowledged that since the shooting, "I am avoiding police even more than I have my whole life. I've visited the 16th Street Mall, but only in the daytime, when I know there are no police around. Considering that they shot intentionally into a crowd, they should have had some kind of non-lethal options available and some training for crowd control. They knew there was a crowd there, but they still chose to shoot many times, even though their job is to protect us rather than put us in danger."

"I personally feel less safe around police," Alexander concurred. "I just don't want to be around any of them. I do believe there are a lot of police officers who want to do right and take care of people and keep order. But in this specific incident, I don't believe it was handled the way it should have been done, and now I don't feel comfortable around police at all."

"Since that day, I've been getting anxiety whenever I see a police car or even a large crowd," Weldehiwet echoed. "I don't know how long it will take, but currently I don't feel safe around Denver police, or even police in general."
KEEP WESTWORD FREE... Since we started Westword, it has been defined as the free, independent voice of Denver, and we'd like to keep it that way. With local media under siege, it's more important than ever for us to rally support behind funding our local journalism. You can help by participating in our "I Support" program, allowing us to keep offering readers access to our incisive coverage of local news, food and culture with no paywalls.
Make a one-time donation today for as little as $1.