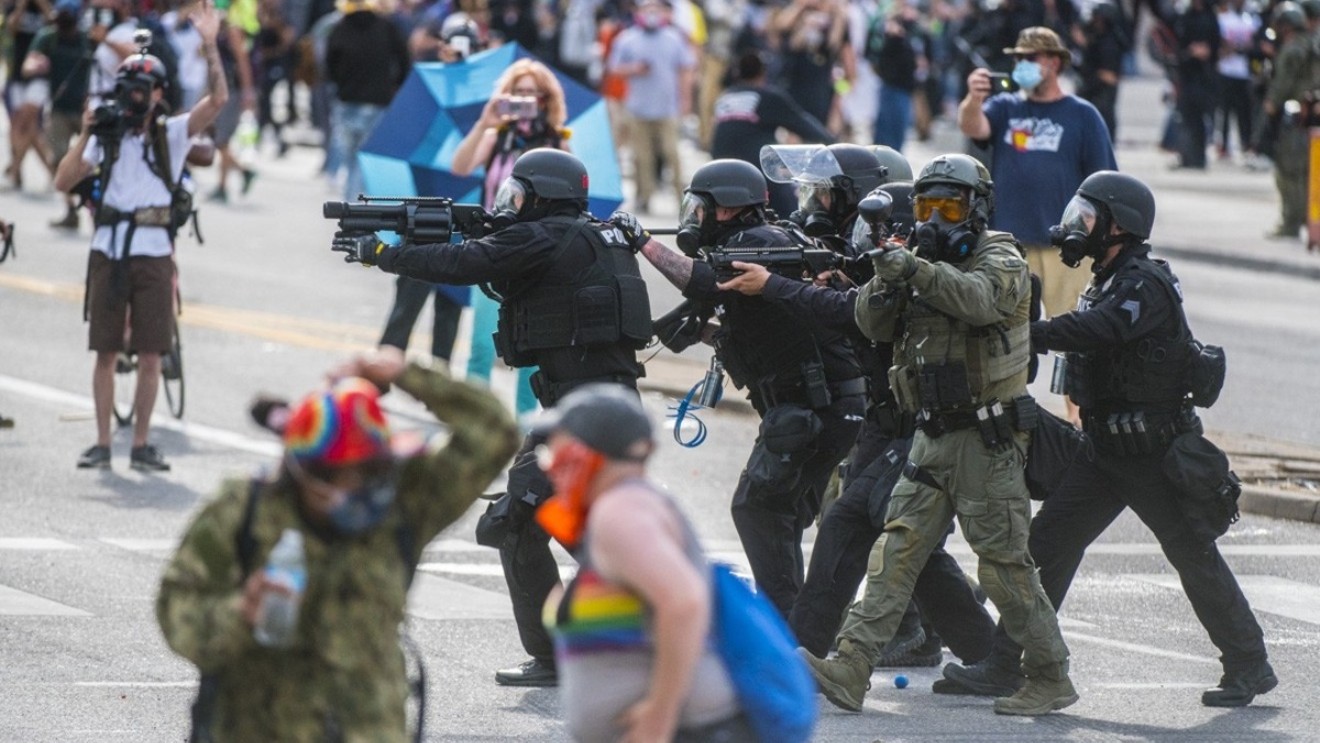 An image from the May 30, 2020 Westword slide show "Curfew, Law Enforcement Clear Out Protesters on Day Three." Evan Semón Photography
From 2018 to 2021, the number of arrests made by the Denver Police Department fell in all seven of its police districts, while the percentage of arrests involving use-of-force incidents rose in six out of the seven.

These statistics come from the DPD's own records, shared on this web page. However, the department insists that the data shouldn't be interpreted as evidence that Denver officers are relying on force more frequently than in past years. Instead, a spokesperson argues that the statistics are skewed in part by recent changes in reporting requirements involving takedowns and training a weapon on a suspect.

The increase can't be blamed on the police response to the George Floyd social justice protests that began in May 2020 and led to both reform legislation and multiple lawsuits; in most categories, 2021 totals were higher than those for 2020. An exception was District 6, where the majority of the demonstrations took place. Its use-of-force rate was higher in 2020 than in 2021, but not by much — 49.2 per 1,000 arrests during the former, 44.2 percent during the latter. In 2018, the rate was 24.5 percent.

denvergov.org
Stats for use-of-force incidents per officer, which aren't broken down by district, tell another part of the story. In 2018, the DPD calculated that 975 officers registered zero use-of-force incidents. That number fell to 790 in 2021. And while officers with a single use-of-force incident went down from 2018 (302) to 2021 (261), those with two or more on their record increased across the board, albeit with occasional dips from 2020 to 2021.

This graphic offers details. Note that the number of DPD officers was slightly higher in 2018 than in 2021.

denvergov.org
When Westword inquired about these trends, the DPD offered the following statement: "There are many different factors that can attribute an increase in use-of-force reports. One of those factors is changes in reporting requirements. For example, pointing a weapon at someone and takedowns are now required to be reported and count as use-of-force incidents. There are other factors that are not controllable and dictated by the actions of the involved individuals. Officers are trained to attempt to deescalate situations where force is not used, but it is not always practical."
KEEP WESTWORD FREE... Since we started Westword, it has been defined as the free, independent voice of Denver, and we'd like to keep it that way. With local media under siege, it's more important than ever for us to rally support behind funding our local journalism. You can help by participating in our "I Support" program, allowing us to keep offering readers access to our incisive coverage of local news, food and culture with no paywalls.
Make a one-time donation today for as little as $1.