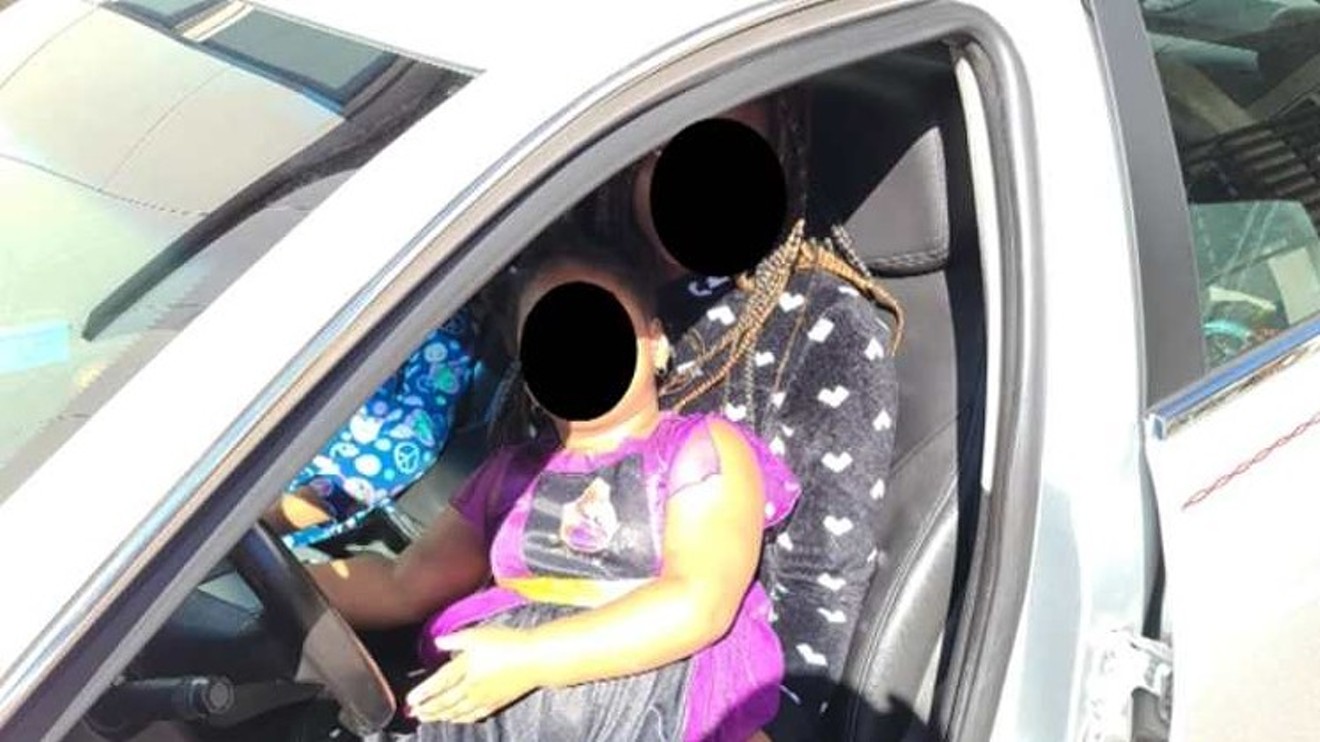 A photo of Naphtali Israel's car occupied by family members whose identities have been disguised to protect their privacy. Killmer, Lane & Newman, LLP
In early June, amid downtown protests about excessive police force prompted by the killing of George Floyd, Naphtali Israel spoke out about an incident the previous month during which he and his three stepdaughters were held at gunpoint by Denver police officers outside a local Safeway store in what appeared to be an enormous overreaction to a dubious 911 call. The entire episode was captured on video.

At the time, Israel's attorney, David Lane, of Denver-based Killmer, Lane & Newman, LLP, was noncommittal about filing a complaint over the matter, saying he wanted to speak with city authorities first. But rather than officials entering into negotiations over a possible settlement, Lane contends that he was practically dared to sue — which he has now done.

According to Lane, "I gave them until sundown" on Friday, July 10, to respond to his outreach about the case. The following Monday, July 13, he says, "I heard from Denver. They said, 'Go ahead and file in federal court. We'll see you there.'"

This response surprised him, he told us: "I would think if there's ever a case they'd want to talk about before going to federal court, this would be it. I don't know what the hell they're thinking. In my opinion, it's not a good case to take to federal court."

Here's how the lawsuit, dated July 27, summarizes the incident and its fallout:


Responding to a report from the Safeway manager that there was a black man sitting in the parking lot alone in a car with a gun, one officer drew his weapon and pointed it at the children while barking orders at them, when all they were doing was sitting in a parked car waiting for their stepfather. J.D., the 14-year-old was so frightened she literally wet her pants. Both she and her 7-year-old sister, A.S., are now in psychological counseling after the officer pointed his gun at them for no discernible reason. Their stepfather, Mr. Naphtali Israel, was stopped by the other two officers who had their hands on their guns as he left the store. He was handcuffed and searched for a weapon. Finding none, the officers released him. All the Plaintiffs were seized without probable cause or reasonable suspicion to believe they, or indeed, that anyone, had committed any crime. All were the victims of excessive force by the defendants and all were targeted based upon their race.


In a previous interview with Westword, Israel described what happened as "definitely horrifying. I felt like I walked into a nightmare. I felt like my life was in jeopardy, and it was frightening for my stepchildren, because they thought I was going to be killed."

Afterward, he continued, "I went down to the precinct to file a complaint. The officer there asked who I was making the complaint against, and I said, 'This is the officer, and this is the date and the situation.' He said, 'I have to get a sergeant to come and help you' — and then I stood outside for 45 minutes, and no one ever came and helped me." In his opinion, "They don't want to make a complaint against another brother in blue."

In Israel's view, the officers "were simply out of control, and don't have any type of respect for African-Americans. If a call is made about a black man, they're going to come with aggression. I fully believe that if it was a white man sitting in a car with his daughter at a Safeway and a call went out, it would have been approached totally differently."

By the way, the lawsuit states that the 911 call "essentially consisted of the store manager saying 'Can you guys just do a quick drive by here? I’m told there’s a black guy in a white hoodie sitting in a Cadillac by himself in the parking lot and he has a gun.'" The document adds that "sitting in a car with a gun is not a crime, violation or petty offense of any sort, even if you are 'a black guy.'"

Click to read Naphtali Israel, et al., v. City and County of Denver, et al.
KEEP WESTWORD FREE... Since we started Westword, it has been defined as the free, independent voice of Denver, and we'd like to keep it that way. With local media under siege, it's more important than ever for us to rally support behind funding our local journalism. You can help by participating in our "I Support" program, allowing us to keep offering readers access to our incisive coverage of local news, food and culture with no paywalls.
Make a one-time donation today for as little as $1.